I was out of town last week when we had that crazy storm so i missed all the water and flooded streets.
A neighbor sent this email and photos concerning Rhode Island Avenue 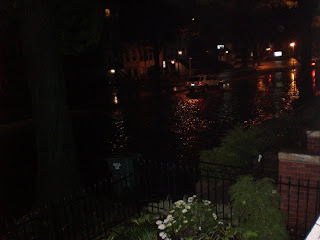 Okay, so that's hyperbole, but seriously, what's up with our Department of Public Works and WASA that they refuse to fix the storm drain on Rhode Island Ave on the east bound side just before 1st ST NW in front of houses 120 and 122?

From about 8pm Wednesday nignt until 11am Thursday morning it looked like the attached pics.

Cars were struggling to get through. What if an ambulance was trying to get to Washington Hospital Center and couldn't because of this ridiculous amount of water? 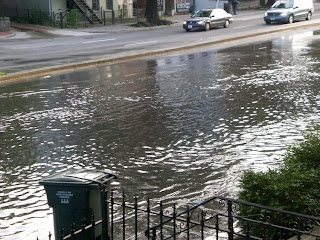 I called WASA emergency several times (the lady was nice and trying to be helpful) and they finally sent a street sweeper to attempt to clear debris around midnight. Despite 30 minutes of effort, the street sweeper was unsuccessful.

I've come to learn that neighbors have repeatedly called WASA about this storm drain being clogged with trash and leaves, yet they have not cleared it yet. I was out of town for the Saturday storms of May 31 but I hear the same thing happened as on Wednesday night which is when I took the pics.

I figure if we can get this info in a public forum maybe the storm drain can get cleared properly and stop putting our houses at risk for serious and damaging flooding. 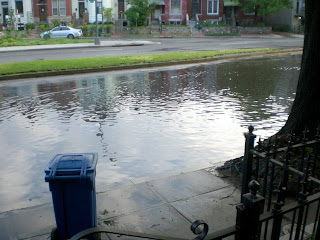 Thanks for your time,
Ryan


Then i received this update


I sent basically that same email and all the same pictures to the Public Affairs Director at WASA, Michele Quander-Collins shortly after emailing you. She responded quickly, told me they'd send a crew out that same day, and sure enough my wife watched them come out, get the man hole cover off the storm drain and pull tons of leaves and debris out of the catch drain and the rest of the sewer.

Obviously last night (Wed) it rained extremely hard again. The drain worked great. The water never breached the curb. Bravo to WASA on the quick response. I think it is just as important to highlight when the system works properly.

It is also proof that continued community involvement by the people of Bloomingdale and constructive, rational inteaction with our city officials is the best way to improve our little corner of the city.

Thanks for all you do in keeping us up to date on the neighborhood.