Dear Friends and Supporters & Lovers of the Arts, Humanities and Culture in our Nation's Capital:


It is my pleasure as Chairman of the Mayor's Arts Awards (4 Years in a Row!) to Invite you and a couple of friends to


Join us in Recognizing DC’s Creative Community and Supporters!


And as a Commissioner to Our DC Commission on the Arts & Humanities'* 50th Anniversary Celebration!


*Check the list of Honorees, the Nominees and our 50 Year History below. It will be a dynamic and fun Celebration.


Theme: White and Gold or Dress to Impress!


**I will be on White Carpet to Welcome you, so stop by and say HI!


There will be limited paid Valet parking in front of the theatre - so arrive by 5:30 PM as lines can be long on this busy street!


See you next Tuesday, Thank you for your support


*How to RSVP and what it means is at the End/Bottom of this email. Please do it as soon as you can and print your tickets to avoid a line. 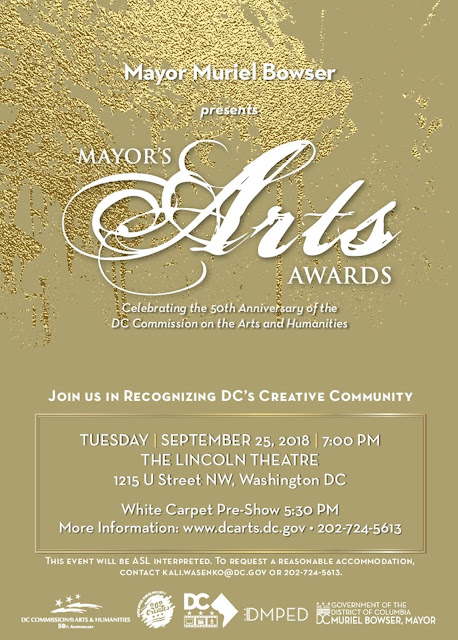 DC Commission on the Arts and Humanities is Celebrating 50th Anniversary!

1968 - 1969
On November 29,1968, the DC Commission on the Arts was formed with a purpose to “encourage the development of programs which promote progress in the arts.” The first chairman and executive director were appointed in 1969.


1970 - 1979
In the 70s, things started to pick up for the Commission. It started to receive more funds from the National Endowment for the Arts, allowing the commission to give out more grants to local DC artists. In 1971, it started an Artist in Residency program, and in 1974, following the District’s Home Rule Act of 1973, the name was changed from DC Commission on the Arts to DC Commission on the Arts and Humanities (CAH). Roughly $200,000 was given to artists and organizations each year during this decade. Also during this time, in 1978, local businesses started to donate money to CAH, which was then distributed to arts organizations.


1980 - 1989
The 80s was a big decade for CAH. The agency saw a steady increase in budgets, grant recipients, and it was the beginning of many programs which are still in effect today. Such programs included  the Larry Neal Writers Awards, the Mayor’s Arts Awards, and CAH’s public art program, DC Creates! Nearly $1.5 million was awarded to local artists from 1980-1989. During this era, Peggy Cooper Cafritz was chairman of the commission. Decades later, she went on to receive the Lifetime Achievement award from the Mayor’s Awards.


1990 - 1999
During the 90s, more grant programs were established, making the awards more tailored to specific needs. These grants were given names such as the Arts Education Projects, City Arts Projects, and Grants in Aid. These grant opportunities are still the types of grants that artists and organizations can apply to today. It was during this time, in the 90s, that hundreds of grants were given to artists and organizations each year. In fact, in 1997 over a million dollars was distributed to local grant recipients. Charles Stephenson served as chairman during the later segment of this decade. He is well known for his contributions to Go-Go music in DC.


2000 - 2010
This decade brought in much revenue for the CAH through public art fundraisers such as Party Animals and Pandamania. Many new programs were also added in this era. These programs included Poet in Progress, Poetry Out Loud, and Murals DC. In 2009, close to nine million dollars was awarded to artists and organizations. During this decade, the CAH began to offer funds to help District arts and cultural organizations improve, expand or renovate their facilities.


2010 - 2018
This decade saw a drastic increase of award money granted from the start of the decade to the end. In 2010, $4.1 million was awarded, and by 2016, $9.1 million was given to artists and organizations of DC. The biggest increase was seen in 2013, when it awarded 5 million more dollars than the previous year. Many successful programs were also added and are ongoing in this time period, such as 202Creates. In addition to new programs, many new grant opportunities were started as well. Such opportunities focused on heritage, buildings, youth employment, events, festivals, field trips and much more. As CAH approaches its 50th anniversary in November 2018, the agency will do so with the largest budget in its history, a testament to the city’s creative professionals and the tremendous support of Mayor Muriel Bowser.


*Here is How to Get Your Tickets to Event Celebrating Washington DC Arts & Humanities:


Please Note: Reserve you tickets As Soon As Possible and print them to speedy entry.Admission is first come, first served - No Assigned Seating - it is general admission. 5 Tickets Maximum- so invite your friends or art colleagues. So when you arrive - go in and get your seats!RSVP's are for internal tracking purposes and do not guarantee admittance. Your order will be waiting for you at the venue's Will Call pick-up location on the day of the event. Please bring photo ID https://www.ticketfly.com/purchase/event/1760897


Posted by Scott Roberts of Bloomingdale at 7:09 AM