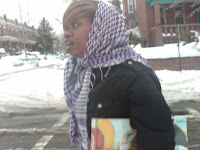 I thought it right to share an experience I had this afternoon, Tuesday, Feb 9th at 4 PM.

I had just delivered some mail including a Netflix envelope to the basement unit’s mailbox and was sitting in my bay window facing the street. I noticed a male and female walk by the path to the front door. She casually scanned the front and basement doors then walked onto my property to the basement. I observed her go down stairs then quickly return to the sidewalk and hustle to catch-up to her male friend. It seemed odd that if she were a friend of my neighbor, she would have knocked on the door and I would have heard it. I heard nothing. I looked in at the basement mailbox paper holder that was now missing the Netflix envelope. Looking down S Street, I saw her discard the brilliant red Netflix envelope that I delivered minutes before. I immediately followed after her west on S Street toward 2nd Street NW. I picked up the discarded and now empty envelope, checked the address (mine) and said to the girl "Excuse me, I think that you took my Netflix by mistake." With that she handed me the CD and proceeded to make multiple unrelated excuses. I pointed out that I watched her crane her neck to look down into the basement from the sidewalk, walk back six feet to my front walk, disappear down there, reappear and now there we were. More excuses.

Key to this is remembering the email traffic about similar experiences reported on this listserv including a missing gift card, credit cards, etc. (I also found a newly torn-up Wachovia document but could not identify its owner.) Fortunately, I had my phone and took the girl's picture. You will see that she is carrying a Scrabble board game under her arm. Suffice to say it is worth 1,000 words. Her male counterpart was African American, 6'2" 200 lbs, braided hair, three quarter length black winter coat, black pants and a black skull cap/winter cap. I didn't get a good look at his face as he only glanced over his shoulder, laughed and kept walking.

I called MPD who arrived in under 10 minutes, took careful notes and saw the picture. They checked and this is mail fraud and tampering with mail. It is a federal crime and not their jurisdiction. US Postal Inspection Service was called and a case opened. I highly suggest that the people who have experienced the same contact USPIS Mail Theft Division at 877-876-2455. You will have to navigate a couple of prompts but that is just to get your locality and the right local inspectors division. Alternatively call the general USPIS number at 202.636.2303.

Posted by Scott Roberts of Bloomingdale at 9:46 PM