Are you aware that DC residents are invited to use 3-1-1 for non-emergency requests?

See this announcement from last month:


Bowser Administration Announces a Police Non-Emergency Line
Residents and visitors of the District now encouraged to call 3-1-1 for less critical incidents
(WASHINGTON, DC) – Today, Mayor Muriel Bowser’s Office of Unified Communications (OUC) is proud to announce the implementation of a police non-emergency option. Residents and visitors of the District can now call 3-1-1 to report all police non-emergencies. The OUC defines a non-emergency call as any call related to an incident that does not pose an immediate threat to the safety of individuals and/or incidents that occurred at least one hour before the initial request for police assistance is made.

Last year, the agency received approximately 1.5 million 9-1-1 calls for service, and approximately of 20 percent of those calls were for non-emergency incidents. To improve call taking efficiency, the agency has developed a pathway for non-emergency calls using the current 3-1-1 call tree, previously utilized exclusively for city services and information.  Now after dialing 3-1-1, callers should press Option # 1 to report police non-emergencies like noise complaints, fender benders, vandalism, destruction of property, and for any crimes that have happened in the past with no reported injuries, and when the suspect is no longer on the scene. Once the call is processed with the operator, based on the findings the Metropolitan Police Department (MPD) will be dispatched to provide a response.
“The 311-phone system will now serve as the initial step in the police non-emergency process, preserving the 9-1-1 line for more critical incidents.  This helps us fulfill our mission to provide accurate and expedited service while responding to both the emergency and non-emergency needs of our residents and visitors,” said Karima Holmes, Director of the Office of Unified Communications.
Previously, OUC’s telephony system did not prioritize emergency calls over non-emergency calls.  Instead, they were handled by 9-1-1 call takers in the order in which they were received. Re-routing non-emergency call types from the 9-1-1 queue will help to better prioritize emergency calls and preserve the 9-1-1 telephone line for life-threatening emergencies. In any situation in which there is an immediate threat to life and safety residents are encouraged to call 9-1-1.
To learn more, please visit ouc.dc.gov
https://ouc.dc.gov/release/bowser-administration-announces-police-non-emergency-line 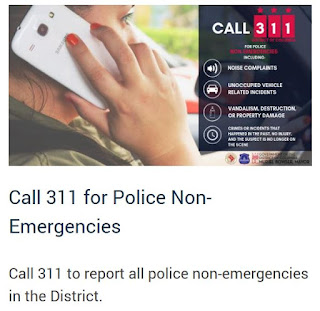 Posted by Scott Roberts of Bloomingdale at 11:22 AM