I really don't anticipate retuning to add much content to this blog, and i am very happy that Scott Roberts resuscitated this site,. I did want to post this info on street cars, and i'm sure i'll post something when the first tavern opens up. ; )

I first hear talk of the streetcar project after i moved to bloomingdale in 2003,  and there was a lot of rumbling about the anacostia streetcar experiment in 2004. Shortly after i started this site i mentioned the possibility of street cars ( again) coming through our neighborhood back in 2005.  That post included its then proposed lines and routes: 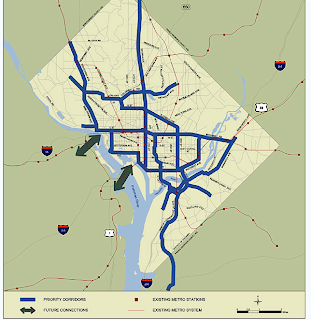 This was a hopeful study and the links are now dead. ( check out the old content on this cached site) there was so little information to be found about streetcars then. some seldom updated sites and discussion boards. promised of an already past completion of the anacostia line, etc..

Here's one brochure i got at some community meeting, maybe even adams morgan day: 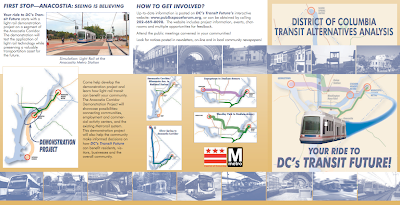 some of the ideas kept changing street cars to bus rapid transit to rapid bus to aw hell you're just on yer own.  i posted a few other things here and there when there was info, but it wasn't until early autumn last year that things got really exciting. it was when DDOT published this plan
Like the 2005 info, this plan included a route that goes through bloomingdale plus a second route!
Here is the proposed plan in its final phase 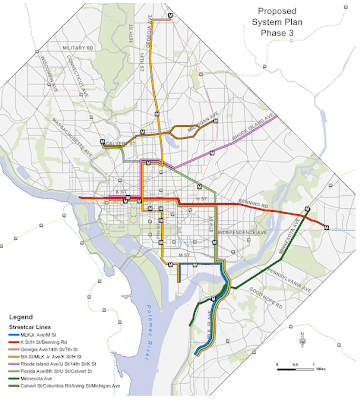 The two lines in Bloomingdale are in the Phase II portion of the plan.  i take the 90 buses very often, and i would sure like a non-transfer route out to mount rainier.  I have no idea of the time lines, or how likely this is to truly happen. i'm deeply skeptical, but i hope it does get built.

There are some upcoming meetings about the developments if you are so inclined to attend.

May 6
5:00-7:00 pm
Renaissance Hotel
999 9th Street, NW
This meeting will address the current legal and environmental framework for modern streetcar systems. The seminar is free and open to the public.
Rich Bradley, President of DCST and Executive Director of the Downtown Business Improvement District, will moderate a panel of transit and urban design experts. Martin Schroeder, Chief Engineer for the American Public Transit Association, will review existing and developing streetcar technologies. Greg Baldwin, a Principal with Zimmer Gunsel Frasca, will present strategies for integrating streetcar infrastructure into urban streetscapes. A question and answer period will follow.