what if Joe Mamo's mixed-use development had no required offstreet parking ?

Under the proposed zoning regulations review being coordinated by the DC Office of Planning -- if Florida Avenue NW were to be categorized as a "transit zone area," since it is serviced by a major bus line and is within walking distance to the NoMa-Gaulledet Red Line Metrorail station, then the minimum parking requirements would be removed.

So what would that really impact in Bloomingdale?

There are two empty lots along Florida Avenue NW.

Here is the smallish empty lot on the southside of the unit block of Florida Avenue NW -- next to Revive, etc.   This lot used to house tires. 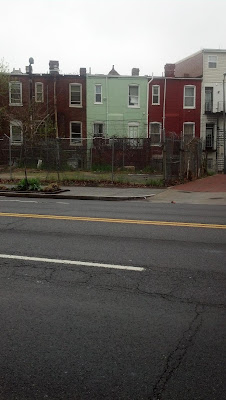 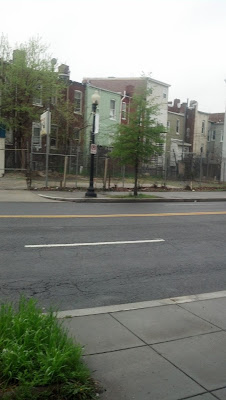 And here is Joe Mamo's empty lot at North Capitol Street NW and Florida Avenue NW.  This is next to the former Soul Day Spa and Salon, now Fiddleheads Salon.  The third image below is rendering from 2011 of what Joe Mamo proposed back then; what ultimately gets developed would likely have the building height, in any event. 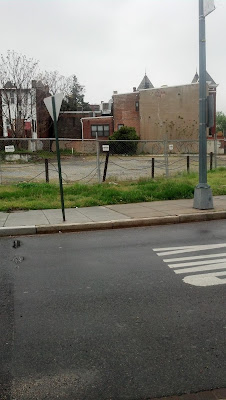 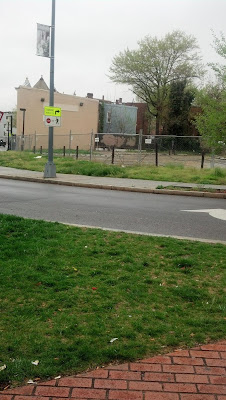 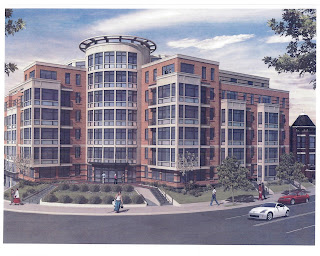 How would you feel about mixed-use development projects on these two sites that could possibly have NO offstreet parking, under the proposed zoning regulations review?

No big deal?
Posted by Scott Roberts of Bloomingdale at 12:17 PM

...searching for a pulse here

i know for many condos in the Navy Yard area, residents were not given the opportunity to have Residential Parking Permits. I don't remember how that played out, but it's an interesting concept and if motions were made in that direction, could quell some opposition to this. as for me, i'm far closer to "no big deal" than i am to "horrible".

As a driver, who chose this neighborhood in part for its easy access to MD (for University and office), it is hard for me to imagine that this parcel would not have the same attraction to other drivers, located on North Capitol expressway and Florida Avenue.

Parking or no parking, that building looks bigger than the lot!

How many people know that that lot is Q Street? And that there was a movie theater next to that corner in the teens?

Whatever happened to the study about bringing back Truxton Circle? :)

No matter what neighborhood you live in there will always be a distribution of residents that will want (or need) to drive to work... that can't be helped much. The problem of no off street parking becomes a real issue is when there aren't other transit options available. I would say that FL Ave has decent access to buses with the 92, 93 running up and down there. The 96 isn't far away... and neither is the G2. Any of these will deposit you to at a metro station with some ease (granted, weekends might need to schedule a bit more). I stop using public transit when I know it is going to take a bus-to-bus transfer to get to my destination, and I don't think you would need to do that to get to major centers of business in the city from this location. I say go for it sans parking, I would suspect that these other transit options will still draw in folks without cars.

I don't see where there is room anywhere on that lot for parking anyway, so does this mean it would eliminate a need to build underground parking? If that is the case, I imagine it would accelerate any potential project. The environmental remediation because of the former gas station's underground tanks would be expensive. I've long assumed that was at least a part of the reason nothing was happening here.

Otherwise I really don't know what I think about the parking situation. I'm sure it would affect us in Bloomingdale. I would lean towards not allowing RPPs, and then making the surrounding streets require RPPs for more than 2 hours.

Thanks for mentioning residential parking permits (RPP's). The current trend with DC transit-oriented development is to eliminate all offstreet parking in the new construction building -- that is, no interior parking structures -- and to deny residents of the residences -- apartments, condos -- RPP's.