a week from today: "The History of Bloomingdale - Why It Should Become a Historic District" presentation - Wednesday, 12-06-2017 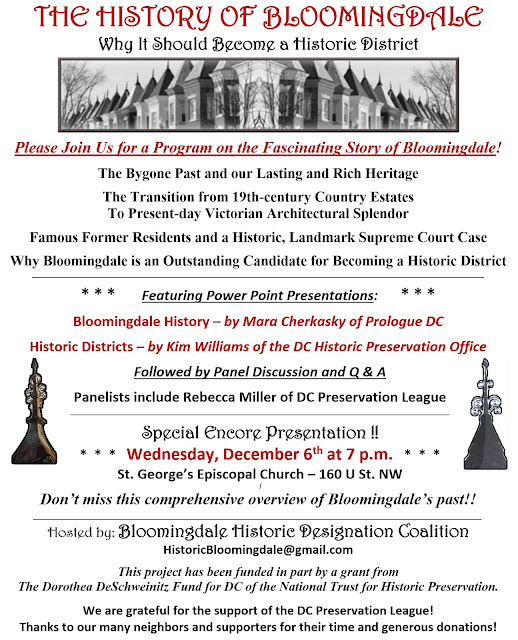 
.    A detailed description of the highly distinctive architecture and attractive facades that give Bloomingdale its beautifully coherent streetscapes
.   The well-known architects who designed the houses, as well as the renowned and well-regarded builders who constructed the brick homes
.     The early land owners and how their former farms and country estates were sold and sub-divided into individual home lots
.    The significance of the first electric streetcar line in Washington, which was instrumental to Bloomingdale’s rapid development
.    The background and history of Bloomingdale’s churches
.    The racially and ethnically restrictive housing covenants once prevalent throughout Bloomingdale that prevented any person of color or other minority groups from buying a home in Bloomingdale
.    The historic 1948 Supreme Court case regarding the contested sale of 116 Bryant Street NW to a non-white person that led the Court to declare such discriminatory covenants unconstitutional and thereby forever changed housing laws throughout the United States
.    Numerous notable past residents of Bloomingdale, including artists, performers, civic and labor leaders, and politicians and presidential political appointees
.    The history of McMillan Reservoir, with landscaping by Frederick Law Olmsted, Jr., and its early role as a park with recreational facilities, a band stand and walking paths
.     Information on what DC historic districts are
.     Examples of successful re-developments in DC historic districts

HOPE THAT YOU CAN ATTEND!