check this out: self-guided tour of the "Campaign Against Covenants in Bloomingdale"

Click on the link to read the entire post -- and to see the tour locations throughout Bloomingdale.

The Campaign Against Covenants in Bloomingdale

This tour features key sites in the history of black homeseekers’ efforts to rent or buy whites-only housing. Discover why Bloomingdale’s premier architectural corridor was also a racial barrier, and how civil rights attorneys chipped away at this dividing line in the 1920s-1940s.

During the first half of the 20th century, Bloomingdale’s white developers and residents used racially restrictive deed covenants to prohibit the sale or rental of property to African Americans. When Bloomingdale was first developed beginning around 1900, black families already lived on the blocks immediately north, south, and west of here. Many lived in overcrowded and substandard housing downtown. The Bloomingdale neighborhood's new housing stock and prime location attracted middle-class families seeking more space and home ownership. As a result, it became a national epicenter of legal challenges to racial covenants; around half of the cases in DC originated here.

In 2018, Bloomingdale was designated a Historic District based, in part, on its role in the national battle for fair housing.

This tour was created for Mapping Segregation in Washington DC, a digital public history project that reveals the profound impact of racially restricted housing on the nation’s capital. The project was conceived by historians Mara Cherkasky and Sarah Jane Shoenfeld, of Prologue DC, and GIS specialist Brian Kraft. It has received grant support from the African American Civil Rights Grant Program of the National Park Service, Humanities DC, and the DC Preservation League. 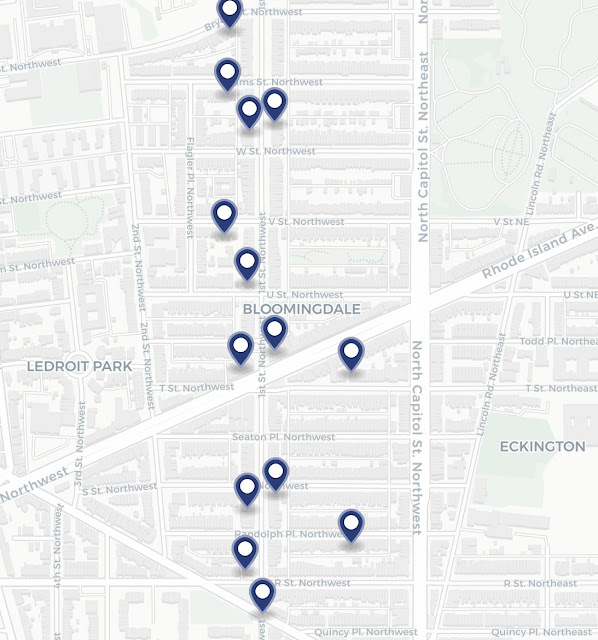 Posted by Scott Roberts of Bloomingdale at 1:11 PM

Will Mercer Cook lived at 127 W Street NW, not 127 V Street. He bought the house in December 1945 from Dudley Woodward, Jr., identified by picture on the previous page. I researched the house's history for the current owners about four years ago.

Neal - I forwarded your correction to PrologueDC and they will have the correction made on the site. Thanks for flagging this!

Mara is offering a walking tour on Sunday morning as part of the DC History Conference. More info and registration is here:
https://www.eventbrite.com/e/45th-annual-dc-history-conference-tickets-48710627799