A neighbor on the unit block of Adams Street NW passes along a scan of a flier found on car windshields yesterday, Tuesday, 10-16-2018: 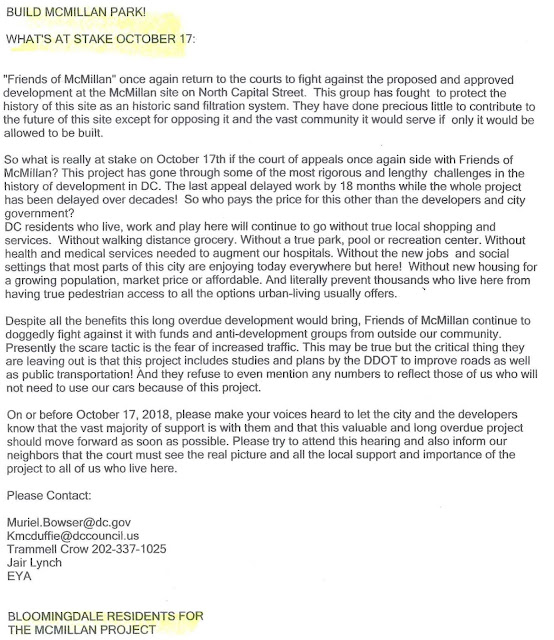 Posted by Scott Roberts of Bloomingdale at 9:45 AM

I've lived here long enough to know we used to have "true local grocery shopping in walking distance." That was the Safeway at 4th and RI Nw. This building is now a DC block grant services administrative building. It could still have been a grocery store if DC government really cared and had invited other food distributors to develop the spot. So i'm not particularly trusting whoever is behind this strike against those of us who have issues with how McMillan park is now being developed.

Safeway pulled out at 4th and Rhode Island because the newer, larger Safeway at 4th and Rhode Island NE was taking its business. Nationwide, Safeway and other big grocers were consolidating stores. My memory (I've been in the neighborhood since 1983} is there weren't other grocers interested in small stores at that point in DC history. This doesn't mean I'm persuaded by the Build McMillan Park flyer stuck on my car.