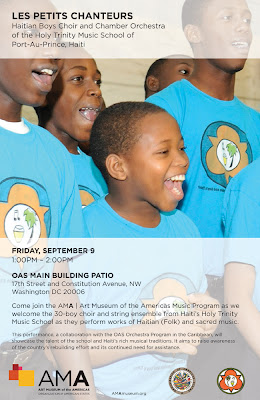 See this message from Stuart Davenport:

I want to let people know that Les Petits Chanteurs are returning to Bloomingdale this week, and they will be performing at the Art Museum of the Americas at the OAS building this Friday at 1pm.

Les Petits Chanteurs are the Haitian choral singers and classical musicians who performed in Bloomingdale two years ago at St. George`s Church, the Bloomingdale Farmers Market, and the Big Bear Cafe during the annual neighborhood pig roast (bi-annual??).

They are now touring the eastern United States as they perform and raise funds to rebuild their school and music hall in Port Au Prince.

They come into DC on Thursday, Sept. 8th and will be having a BBQ at the Big Bear Cafe from 3:30pm-8pm. They then head to the National Cathedral to prepare for their tour (and practice for their performance at OAS on Friday).

For all neighbors who offered housing, helped with the BBQ, and came to hear them sing years ago - come say hello at the BBC! Or the OAS building on friday.

-Stuart
Posted by Scott Roberts of Bloomingdale at 9:43 AM