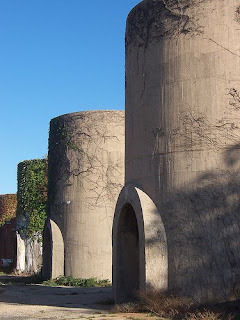 Looks like this YouTube video got noticed by Lydia DePillis of the Washington City Paper Housing Complex column.

Persistent Grumbling at McMillan Produces Pretty Video
Posted by Lydia DePillis on Jul. 25, 2011 at 8:19 am
http://www.washingtoncitypaper.com/blogs/housingcomplex/2011/07/25/persistent-grumbling-at-mcmillan-produces-pretty-video

In the last few days, a wordless little ditty on the historic elements of the McMillan Sand Filtration Plant site hit the internet. Made by Bloomingdale resident Snorre Wik, it`s part of an attempt by local leaders to press for as much historic preservation and park space on the McMillan site on North Capitol Street as possible.

Even after an extensive community engagement process last winter (http://www.washingtoncitypaper.com/blogs/housingcomplex/2010/12/16/the-great-reset-mcmillan-has-bedeviled-developers-for-decades-can-the-latest-try-be-the-last/ ), some local advisory neighborhood commissioners thought those elements—along with stormwater and traffic mitigation—were inadequate. They declined to quickly give the draft concept their initial stamp of approval, which would have given the private development team strength going through the zoning and historic reviews.

In June, the city announced (http://www.bizjournals.com/washington/print-edition/2011/06/10/dc-changes-course-at-mcmillan-will.html ) that it would be taking over those processes, which will include traffic and stormwater management studies. After a community meeting on the subject, commissioner Hugh Youngblood laid out his take on a local blog (http://bloomingdaleneighborhood.blogspot.com/2011/06/hugh-youngbloods-thoughts-from-thursday.html ).

``I received the clear message that the community is ready to deploy its skills and dedication into an effort equivalent to the Manhattan Project with the mission of taking the power back and developing a plan for the historic McMillan by by the people and for the people,`` Youngblood wrote.

Youngblood`s group is talking with an Australian landscape architect and planning a survey of residents to come up with a few points of agreement. ``Things that are the major drivers of external impacts need to be addressed first rather than last,`` he told me a few weeks ago. ``I do think we need to start over in terms of transportation and stormwater, and in terms of a park.``

This project has ``started over`` so many times that even the closest observers can lose track.

(McMillan silo image courtesy of Suzanne Des Marais.)
Posted by Scott Roberts of Bloomingdale at 8:47 AM