See this article from the Washington Examiner: 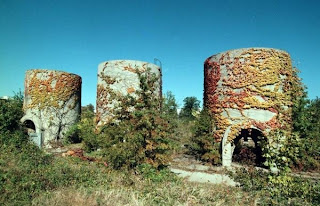 
One of the District`s premier development sites sits on 25 acres less than three miles north of the Capitol, remaining unused for more than two decades. There`s a reason for that.

``McMillan represents one of the most challenging sites imaginable to both preserve and adapt for current use,`` says a recent Historic Preservation Review Board report on the old sand filtration site adjacent to the McMillan Reservoir in Northwest D.C.


The report goes on to tick off the many characteristics that make the site unattractive to developers: deteriorated historic structures, underground cells that have little practical reuse options, ``enormous`` infrastructure costs and ``the inherent difficulty of inserting any development into a site that is characterized by its park-like open quality.``

Since the District purchased the site from the federal government in 1987, several proposals have made their way before the community and each one has been batted back by those who want a restored park. The site has been closed to the public since the 1940s.


The latest proposal from a partnership of three developers, despite support from the city, is hitting those same old roadblocks.


All of the neighborhood associations directly adjacent to the site, located just west of North Capitol Street between Michigan Avenue and Channing Street, are staunchly opposed to the current plan, which is expected to go before the preservation board next month. The proposal includes mixed-use office and apartment buildings with ground-floor retail to the north and single-family townhouses to the south.


A four-acre park is in the center ,where two of the 20 brick sand filtration structures would be preserved. An additional plaza and brick terraced garden area are to the north.


``Yes, there`s a park, but it`s inside a U-shaped group of buildings -- it`s going to feel like you`re invading someone`s private space,`` said Kirby Vining, a nearby resident.

At-large D.C. Councilman Phil Mendelson has asked the preservation board to reject the proposal because developers would ``demolish too much of the site, including structural resources, landscape resources, and historic vistas.``

But while the board staff lament the loss of the historic structures that developers have determined are too deteriorated to salvage, their report is in favor of the plan and notes compromises must be made with difficult sites.

Not all residents are fighting for more park space. Malcolm Kenton, who is also a contributor and editor for the Greater Greater Washington blog, said he thinks the development team has blended green space while making the project economically viable.

``You have to look at the broader regional perspective,`` Kenton said. ``This region is going to continue to grow whether we like it or not, so let`s put more of that growth closer to the center of the city.``
Posted by Scott Roberts of Bloomingdale at 11:17 AM