And note that the photo that accompanies this WaPo item is of Bloomingdale. 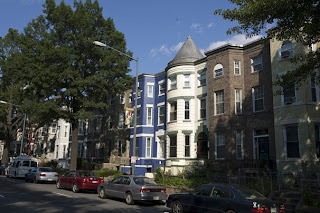 
Via Michael J. Petrilli at the Fordham Institute`s Flypaper education blog comes a list of the 25 U.S. Zip codes which saw the greatest gain in white population share from 2000 to 2010.


In the absence of 2010 economic data, which is yet to be released, Petrilli uses the relative change in white population to gauge the impact of gentrification.


Three of the top 25 are in D.C. — only Brooklyn, N.Y., with four Zips, is more represented on the list. The particular D.C. Zip codes identified will come as little surprise to city denizens:


Topping the list are a several unexpected locales — Columbia, S.C., Chattanooga, Tenn., and Roanoke, Va. Petrilli writes that gentrification ``is not a phenomenon limited to a few of our great coastal cities. These gentrifying neighborhoods are literally all over the map.``

...and here is the source material:


For the past several years I`ve been obsessed with the issue of gentrification. Mostly that`s because of a book I`ve been writing about diverse public schools. What`s clear is that gentrification—for all of its downsides—is providing a once-in-a-generation opportunity to integrate some of our schools—at least if we don`t let it go to waste.


So I was curious: Which communities in the U.S. are witnessing the greatest amount of gentrification? I started poking around Census Bureau data (with the assistance of some colleagues and the Census Bureau`s excellent help line) and here`s what I found. I looked at zip codes (which isn`t perfect, because boundaries can change) and places with a large increase in the white share of the population (which isn`t perfect, because you`d really want to look at changes in income levels, but those data aren`t available yet for 2010). With those caveats in mind, take a look: 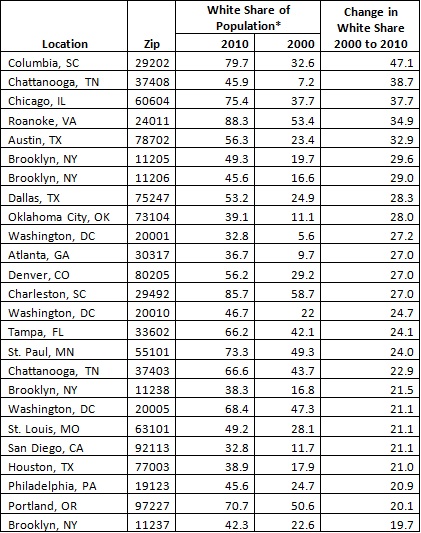 I`m not an expert on gentrification (education policy is my beat) but I was surprised by the list. I expected to see Chicago, Brooklyn, Washington, D.C., and Denver. But Chattanooga? Columbia, SC? Oklahoma City? St. Louis? This is not a phenomenon limited to a few of our great coastal cities. These gentrifying neighborhoods are literally all over the map.


And the Washington City Paper picked up this story this morning:

WhitePeople Flocking to Shaw, Nearby Neighborhoods
Posted by Scott Roberts of Bloomingdale at 6:16 PM