I have not seen the press release that John Salatti issued over the weekend referenced in this artcle. (Update: ANC 5C03 Commissioner Hugh Youngblood has supplied a link to a press release titled "The District Bars Residents from the McMillan Sand Filtration Site" by Stronghold resident Kirby Vining). 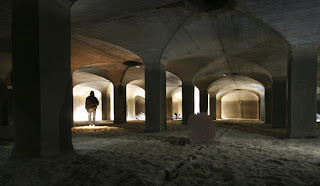 The underground sand vaults at McMillan, photographed in 2006. (Robert A. Reeder - The Washington Post)


On and off for two decades, District residents and other curious parties have been free to tour the historic and atmospheric premises of the McMillan Sand Filtration Site, the fenced-off former water treatment facility at North Capitol Street and Michigan Avenue NW famous for its ethereal masonry towers and underground vaults.


In the past two years, community leaders from neighboring Bloomingdale have held a number of well-attended public tours of the site, in addition to giving access to smaller groups including art and architecture students. They’re awesome; I highly recommend taking one.


But now, as the site moves toward redevelopment, the public’s access is on hiatus.


Earlier this month, the D.C. government’s real estate director, Jeff Miller, e-mailed John Salatti, one of the Bloomingdale activists who have led the recent tours. Miller wrote that due to concerns about the “safety and stability of portions of the site,” the only access given to the site will be for “survey, stabilization work, or other development-related studies.” The locks were changed, making Salatti’s key useless.


That terse missive prompted Salatti to do two things. First, a set of tours originally planned for this past weekend was put on hold. Second, he tried to figure out what prompted the change in policy. Miller blamed the city’s Department of General Services, which in turn put the blame back on Miller. That incensed Salatti enough to issue a news release this weekend decrying the change.


Miller responded today in an e-mail to Salatti, writing that he supports the tours but a “safety assessment” of the site is needed. Once completed, he wrote, “we will then be able to determine how best to proceed with future tours on a case by case basis.”


So, long story short, it is unclear when, if ever, the public will be able to tour McMillan before the redevelopment plans proceed to construction — something that’s at least 18 months away.


Salatti still wants answers on why the status quo ante had to change. “It’s not that they’re about to bring the steam shovels in and tear the place apart,” he said. “They’re really being spare about what’s driving this.”


Jose Sousa, a spokesman for the city economic development office, suggested that it’s unusual and unwise to give private citizens like Salatti the keys to a 25-acre piece of city property without much supervision. “We have to basically regulate access to the site to maintain safety and security at that location,” he said.

And, unrelated to this Mike DeBonis post above -- Hugh Youngblood has supplied a link to a cross-section of a McMillan underground water filtration cell.
Posted by Scott Roberts of Bloomingdale at 6:04 PM

Of course the site is a dangerous one and there are many safety issues; finally, someone with some sense in DC government. Thank you Mr. Sousa.
So Mr. Salatti who thinks he owns Bloomingdale has had a set of keys to McMillan??? Shut the front door!!! THE Mr. John Salatti, Esq., the former ANC Commissioner and failed Ward 5 candidate for DC Council; who took campaign donations from a 501c3, who doesn't even live in the SMD that McMillan is located in, has a set of keys? Mr. Salatti who wants the district to invest in a plan by a professor at CUA that calls for a petting zoo and bee farm that will be the most expensive farm land in the world! Are you actually telling me Mr. Debonis that the John Salatti, you know the one that had a constituent state that he “likes to hear the sound of his own voice” and was quoted in WCP…. actually has keys to McMillan?
HTJR must have given him the keys when he gave Mr. Salatti all those proclamations. I have had an epiphany now, that’s why Mr. Salatti thinks he owns Bloomingdale…he has the keys!!!! Mr. Debonis you must file a FOIA and find out who has he been taking on visits to this DC Govt. site? Any midnight visits to the Garden of Good and Evil?

pentagon40 posted on WashPost
12:36 AM EDT
How pompous can one guy get...Just because he has had a key to McMillan doesn't mean anything other than the city USED to give him access to the property...Now for the reasons named they are protecting themselves from civil liability..Salatti understands this, he's just spoiled sand thinks he is entitled to access...He has no claim to the property or what the cityh decides to do with it...Grow up!!!!!

Someone's a little unhinged here, and I don't think it was anyone written up in the post...