Ha!  The permits posted in the windows said "funeral home" as the future use. 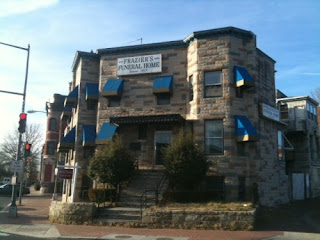 
Back in Sept. 2011 the former Frazier’s Funeral Home sold for $850,000. There’s been lots of speculation about who may be moving into the space but we finally have an answer. A reader sends word from the D.C. Historic Preservation Office/Office of Planning:


“it is being converted into a 4-5 unit multi-unit residential building. The building was apparently originally three rowhouses merged together. The party walls are no longer intact on the interior, though. The formstone is being removed and the brick is being renovated.”.
Posted by Scott Roberts of Bloomingdale at 6:10 AM