Ward 5 redistricting: Bloomingdale to be part of new ANC 5E

This article on Ward 5 redistricting appears in the just-released Summer 2012 issue of the Ward 5 Heartbeat by Brookland resident Abigail Padou.  Note that Bloomingdale will be moving from ANC 5C to ANC 5E.  The election for the ANC 5E commissioners will be part of the November 2012 general election -- with the newly elected commissioners taking office in January 2013. 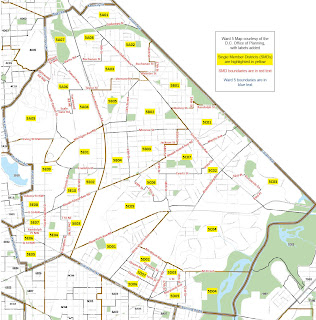 
As a result of redistricting, the number of ANCs in Ward 5 will increase from three to five. The new commissions are ANC 5A through 5E. The number of ANC Commissioners has stayed almost the same, increasing from 36 to 37. New boundaries for Single Member Districts (SMDs) have also been drawn.


All Advisory Neighborhood Commissioners are up for election on November 6, 2012. Residents will vote according to the new boundaries at that time. The new boundaries will go into effect on January 1, 2013.


Candidates running for ANC Commissioner need the signatures of at least 25 registered voters in their Single Member District to get on the ballot. Petitions are available for pickup at the D.C. Board of Elections and Ethics starting July 9. Petitions are due back on August 8.


ANCs receive quarterly ``allotments`` of funds from the District of Columbia to pay for office expenses and grant-giving. According to Gottlieb Simon, Executive Director of the Office of Advisory Neighborhood Commissions, the existing bank balances of Ward 5`s three ANCs will be ``collected`` before the end of 2012 and redistributed to the five new ANCs on the basis of their population.


Citywide, ``the ANCs will receive the same allotment next year as this year,`` said Mr. Simon. Since the funds must be divided among five ANCs instead of three in Ward 5, each ANC can expect to receive a smaller amount.


ANCs are given ``great weight`` in matters that affect their commission area, such as zoning variances, liquor licenses, permits and planning.
Posted by Scott Roberts of Bloomingdale at 9:03 AM