Read this post by Washington Post's Tom Sietsema on the currently un-built-out and untenanted street-level space on the northwest corner of 1st & Seaton Place NW.  Note that wine maven Sebastian Zutant is a Bloomingdale resident. 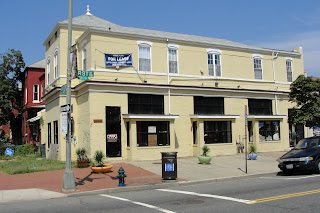 The opening sommelier and executive sous chef at Proof in Penn Quarter are teaming
up to launch an Italian-influenced American restaurant in Washington`s Bloomingdale neighborhood ``early in the new year,`` announced wine maven Sebastian Zutant.

He and chef Mike Friedman — along with Mike O`Malley of 9 Group , a casino resort in Las Vegas — will be equal partners in what the trio is calling The Red Hen, a 50-seat dining room at the intersection of First Street and Seaton Place NW.

Conveniently for Zutant, the location is ``four doors down`` from his townhouse.
Advantageous for all involved, the establishment will be co-designed by Zutant`s
wife, Lauren Winter of Edit, the architectural firm that found fashionable looks for Chez Billy and Rogue 24 , among other District interiors. The Red Hen is expected to take advantage of its prominent windows, and lean light rather than dark.

None of the principals owns a red hen, by the way. They just liked the ``vibe it gives off,`` explained Zutant; the name ``doesn`t sound too busy or over-the-top.``   The team is leaning Italian on the menu because that`s the style they gravitate to on their own. ``The food is easy, simple and clean,`` said Zutant.

... and Prince of Petworth catches up:

Posted by Scott Roberts of Bloomingdale at 11:24 AM