From the office of Ward 5 Councilmember Kenyan McDuffie:

Councilmember McDuffie invites you to the Ward 5 Holiday Party on Thursday, December 20. This will be a time for Ward 5 residents to gather for an evening of great entertainment, food and fellowship. The festivities will be held at Gallaudet University’s Sorenson Language and Communication Center, located at 800 Florida Avenue, NE from 6:30 p.m. to 9:00 p.m. Parking is available at the Field House parking lot or in the Hanson Plaza garage.

We hope to see you there! 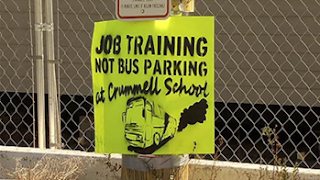 McDuffie Asks Mayor Gray: Where is the Plan for Ivy City?
This week, Councilmember Kenyan McDuffie (D – Ward 5) sent a letter to Mayor Vincent Gray (D) urging him not to expend additional government resources on the lawsuit to operate a charter bus lot at the Alexander Crummell School in Ivy City or in further pursuit of the project.
On December 10, the D.C. Superior Court issued a preliminary injunction halting the District from operating a charter bus lot at the Crummell School until the city consults with Ivy City’s Advisory Neighborhood Commission (ANC) and conducts an environmental screening of the project.
“The Alexander Crummell School is a nationally-designated historic landmark that has fallen into disrepair – largely due to the city’s neglect,” said McDuffie. “The school is in the heart of the blossoming Ivy City community that has been clamoring for resources to enhance the quality of life for residents.”
Mayor Gray was quoted as saying, “’I didn’t talk to anybody about preserving Crummell … That school has been used as a homeless shelter, it’s been vacant. I have been a part of no discussions like that.’”
While Councilmember McDuffie agrees that there is no plan to displace the residents of Ivy City, “It is unsettling that there really is no plan to invest positive resources in the community,” said McDuffie. “The community wants and deserves workforce development initiatives, recreation for youth, and educational opportunities. I urge the Mayor to divert the resources being expended on this lawsuit to develop and execute a plan for the benefit of Ivy City’s residents.”
Click here to read the full text of McDuffie’s letter.

Councilmember McDuffie joined the Michigan Park Citizens Association, Metropolitan Police Department (MPD) and Terry Bellamy, Director of the District Department of Transportation (DDOT) to address traffic concerns along South Dakota Avenue, NE. The walkthrough provided the Councilmember and DDOT with an opportunity to hear from residents, to see pedestrian safety concerns and to see areas where the speed limits were not being enforced. Councilmember McDuffie is working with DDOT to assure that proper measures are taken to address the residents’ concerns.

Afterwards, Councilmember McDuffie joined the District Department of Parks and Recreation (DPR), Department of General Services (DGS), Advisory Neighborhood Commissioners (ANCs), MPD and other community stakeholders to hear from the residents about their safety concerns at the Langdon Park Recreation Center. The walkthrough provided an opportunity to identify areas where residents wanted to see heightened security, as well as, improvements to the facilities available to the residents who utilize the recreation center. Councilmember McDuffie, DGS, MPD and DPR are working together on the various requests made.

McDuffie Celebrates ANC Commissioners for their Commitment to Ward 5

On December 11, Councilmember McDuffie honored the outgoing ANCs for their service to their Single Member District and Ward 5 as a whole.

Councilmember McDuffie offers the following statement for to the Commissioners:

“I would like to take this opportunity to thank you for your generosity in serving as an ANC.
“As a Commissioner, you have worked tirelessly on matters of public policy including decisions regarding planning, street revitalization, social services programs, health and public safety. You have also worked closely with the people in the community and assisted neighbors with navigating the networks of our city’s agencies.  Your decision to serve as an ANC demonstrates your commitment to bettering your community and Ward 5 as a whole.
“Again, thank you for your dedication to the residents of Ward 5.  I have no doubt that you will continue to find ways to serve our community.“
Councilmember McDuffie Welcomes Councilmember Bonds 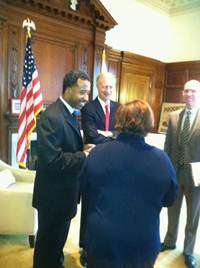 McDuffie Condemns Vandalism of the Faith United Church of Christ
Recently, Faith United Church of Christ of Washington, D.C. was targeted with hateful graffiti on three of its buildings. Vandals wrote on the walls of the church, including the phrases "No low income housing" and “No more ghettos.” The church, located in Ward 5’s North Michigan Park neighborhood, has proposed to build modest wage housing for senior citizens, which the North Michigan Park Civic Association and other community stakeholders have recently voiced their opposition to the new development.
Councilmember McDuffie released the following statement about the vandalism:
“Recently, many of the residents in the North Michigan Park community have voiced their concerns over the proposed development, between the Faith United Church of Christ and the Retirement Housing Foundation, to build senior housing in their neighborhood. I stand with and support the Commissioners from ANC-5A, the North Michigan Park Civic Association and other community stakeholders in opposition of the proposed venture.
“However, I am deeply troubled by the recent events that took place on the church’s property. This kind of hateful act has no place in Ward 5. Vandalism, and any other illegal acts of this sort, will not be tolerated in our community. My office is working closely with the MPD, the Faith United Church of Christ and community stakeholders to make sure that we locate the responsible parties.
“Lastly, I encourage the community to continue to have a robust dialogue and voice their concerns about the proposal. However, it is important to note that violence and vandalism have no place within these conversations.” 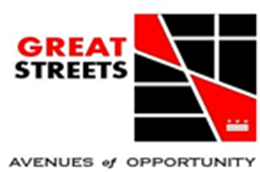 Operating a business can require a significant amount of capital. The District wants you to take the first step towards improving or starting your own business with a grant from the Office of the Deputy Mayor for Planning and Economic Development.
The purpose of the Small Business Capital Improvement Grant is to support existing small businesses, attract new small businesses, increase the District's tax base and create new jobs for District Residents. The Deputy Mayor will be awarding individual grants, between 7th & North Capitol Street NW, up to a maximum of $85,000 each to support and foster growth amongst small businesses.
Grant funds may be utilized to reimburse the grantee for the purpose of capital expenditures to improve the subject property.  All projects must be physically located within the boundaries or have direct frontage on the boundaries set forth. To see if your small business qualifies within the boundaries, click here.
Interested applicants can apply for a Small Business Capital Improvement Grant by clicking here. Application deadline is Friday, February 15, 2013 4:00 p.m. To learn more about the program and the application process, informational sessions will be held on Monday, January 7, 2013 at Banneker Recreational Center, located at 2500 Georgia Avenue, NW from 6:30 p.m. – 8 p.m. and on Monday, January 14, 2013 at the Kennedy Recreational Center, located at 1401 7th Street NW from 6:30 p.m. – 8:00 p.m.
For more information, visit www.greatstreets.dc.gov.
DC Water Announcing Outages for 7th and Florida Ave NE

Posted by Scott Roberts of Bloomingdale at 6:23 AM