Passed along by Bloomingdale resident Bertha Holliday.  I have not copied the entire newsletter -- just the section on Bloomingdale's McMillan Sand Filtration site.

Your December Issue of the Capital Sierran has arrived!
BERTHA

McMillan Park Planning
This past fall, the DC Sierra Club took a position regarding the development planning for McMillan Park, a 25-acre green space and decommissioned water treatment plant in northwest DC.  A proposal for developing that land has been under review by the DC government's Historic Preservation Review Board (HPRB), and on September 24, Jim Dougherty, the Chapter's Conservation Chair, submitted a letter to the HPRB, asking them to "reject the currently proposed master plan" because it contains far too little contiguous public park space.  The letter stated that "the present design plans do too little to preserve the park-like characteristics that dominate the present space," and that "a more balanced plan for the McMillan Park site would devote half or more of the surface to contiguous park and park-like use."
Background:  McMillan Park (which includes McMillan Reservoir) is bound on the north by Michigan Avenue NW, on the east by North Capitol Street, on the south by Channing and Bryant Streets and on the west by Fifth Street NW.  The land was originally developed in 1905 as a water filtration plant for the city, cleverly hidden under McMillan Park, and using an innovative and environmentally friendly system of passing the water through sand (rather than chemical treatment).  The site has a number of large concrete towers that once held the sand and underground cells filled with sand through which the water was filtered.  Most of what is visible above ground constitutes a "green roof" of about three feet of top soil covered with grass and trees.  President Taft declared the site a National Park in 1911.  The original architects (including Frederick Law Olmsted Jr. and other luminaries) designed the space to be multi-functional and open to the public, and it functioned as a park until the federal government closed it during World War II for security reasons.  The plant ceased operation in 1986 and remains closed to the public.
The Proposal:  The current proposal, submitted by a company called Vision McMillan Partners (VMP), under a special contract to the city, includes dense residential apartments (1200 residential units with buildings up to 10 stories) and commercial space (including a 125,000 square foot shopping center and hotel/conference center) and underground parking, with very little green space, most of it just tree boxes. In addition, the plan would destroy most of the historic vaulted underground cells that define the Park's sense of place.
Political Positions/Bureaucratic Processes. Opposition has been mounting against the current plan from several groups – these include Friends of McMillan Park, a group of community volunteers who support sustainable development for the Park, advocate preserving the existing green space along with sustainable development and smart growth, and have been leading the effort to defeat the proposal.  In May 2012, Councilmember Phil Mendelson publicly opposed the VMP proposal before the HPRB.  In addition, the Bloomingdale Civic Association, the Pleasant Plains Civic Association, Howard University, Advisory Neighborhood Commission (ANC) 1B (representing the Reservoir and adjacent neighborhoods), Stronghold Civic Association, and the National Association for Olmsted Parks have all outright (and in most cases, unanimously) rejected the VMP plan.  ANC5C (representing the filtration site and adjacent neighborhoods in Northeast DC) voted in October to support the VMP submission, which resulted in the Bloomingdale Civic Association adopting a Resolution of No Confidence in ANC5C regarding the Park.  Neighborhoods most affected by the proposal cite potential problems with flooding (caused by over-development of the land without adequate drainage systems), traffic congestion, lack of repeatedly requested park space, and failure to preserve the above- and below-ground historic resources of the park and monument to engineering innovation.
A Better Plan:  In July, the HPRB met to review the VMP proposal, and an alternative proposal was presented by a firm called Collage City Studio, on behalf of McMillan Park Committee and Friends of McMillan Park.  That plan would preserve a significant portion of the underground sand filtration vaults, and would accommodate an urban farm on top of part of the green roof above the vaults.  The vaults would be repurposed as a bazaar-style shopping venue (accommodating farmers markets, artisans, musicians, etc.) and community recreation center, and one of the vaults would be preserved to demonstrate the original sand filtration process.  The plan would also expose the below-ground creek – which would be part of a storm-water management system.  The alternative plan includes 1.5 million square feet of mixed use and residential development while preserving the site’s historic core, with hopes that the site would attain landmark designation in the National Register of Historic Places.
The next HPRB meeting addressing this issue is scheduled for Thursday, December 20, at 9 a.m. at 441 4th St. NW room 221-south. Agendas are subject to change, so call HPRB at 202-442-7600 or go tohttp://planning.dc.gov/DC/Planning/Historic+Preservation for updates including videostreaming instructions. Come out and express your support for preserving this national monument and park and to prevent commercial forces from destroying it. 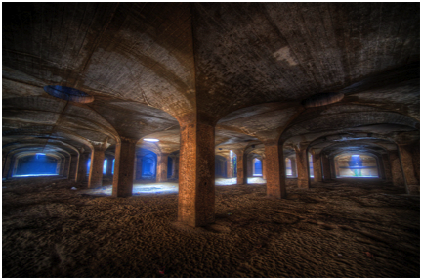 Posted by Scott Roberts of Bloomingdale at 9:00 PM