See this item on the big DC Water/McMillan project -- from the December 14, 2012 Insider e-newsletter from the mayor: 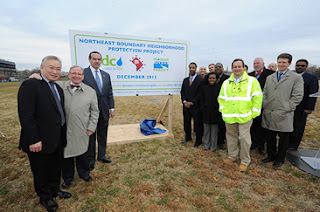 To mitigate flooding and sewer backups in the Bloomingdale and LeDroit Park neighborhoods, Mayor Gray and DC Water announced a major new infrastructure project at the site of the former McMillan Sand Filtration Plant. The Northeast Boundary Neighborhood Protection Project is a product of the Mayor’s Task Force on the Prevention of Flooding, and will be built in three phases between now and 2022.
Mayor Gray established the task force in late August and named City Administrator Allen Y. Lew and DC Water General Manager George S. Hawkins as co-chairs.
“I asked the Task Force two basic questions,” said Mayor Gray. “The first is why the long-term solution to this historic problem was still more than a decade away. The second is whether anything more could be done in the interim. This project answers both questions. I applaud the Task Force and DC Water for developing it, and I want the residents of the affected communities to know that relief is on the way. It will be meaningful, and it will come soon.”
The two neighborhoods are connected to an undersized sewer system and have been subject to flooding during heavy rains for more than a century. DC Water’s long-term approach to this problem, the Clean Rivers Project, is a tunnel system that will add capacity to the sewers and was originally scheduled for completion in 2025. Mayor Gray convened the Task Force and DC Water began a new investigation of causes and possible mitigation strategies after four intense storms inflicted property damage in Bloomingdale and LeDroit Park this summer.
Read more.
Posted by Scott Roberts of Bloomingdale at 8:34 AM