Auto Mobile.. and the shape of cities.... 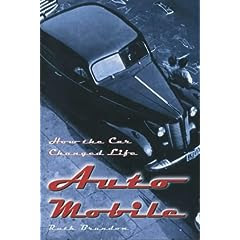 here's an excerpt:
Traditionally , American houses had been built with covered verandahs facing on to the street- the piazzas and stoops within which the action of so many 19th century novels take place. in the early days of motoring the garage ( if any) was a hut in the backyard. But cars soon became too important to be relegated to the hut. The garage moved forward and increased in size, while the front porch disappeared- an enactment in brick and mortar on the automobile's revolutionary effect on social life The proch had been part of a pedestrian lifestyle of casual callers and passers=by, but the car made all of that irrelevant. Less walking meant fewer passers by, while many of the activities ( such as courting) that had traditionally taken place on the porch could now be conducted in the privacy of the car.
Posted by Sean Hennessey at 11:49 AM