See the message and pics below from north Bloomingdale resident Jim Myers who lives along the north-south alley west of 1st St NW (and north of Rhode Island Avenue NW) where DC Water is installing its brine-freezing pipes in trenches.

For those of you lucky enough to NOT be retired, and therefore away all day during the heavy construction in the alleys, I'm sending you these pix so you can see what's actually been going on under those steel plates that rattle every night as traffic speeds over them.


Being right alongside the alley, we've been stunned by the extent of the violence, disruptions, and scope of the work.   They've caused damage to the inside and outside of our house--cracks inside; scrapes outside--and also on the outside of the garage and along the fence.  So we have a claim pending, with the adjuster coming Tuesday.

As some of you know, they already cut the power to the streetlight on the block.  One of our neighbors feels that they caused a surge or something that blew out the A/C in his basement apartment, and that it can't just be a coincidence that they were trenching around his power lines in the alley at the time.

Oh, and who in the near vicinity does not have the black tar and asphalt stones (from the so-called 'cold patch' around the steel plates) now tracked all over their porches and into the houses??


Beyond that unending nuisance, I think I'm about to lose it because of the constant noise!

I swear the fillings in my teeth were rattling when they were using the jackhammer to break up the concrete in the alley!!  And the hammer drill for the rebar (see all the pix) was not much better.  That's not to mention all the noisy diesel backhoes, bulldozers, dump trucks, concrete trucks and the like.

We'd like to leave during the daytime to escape all this, but we do NOT trust these guys to not do further damage, or, do stupid things!  For example, they were simply slamming the backhoe scoop shovel as hard as they could down onto the the alley concrete to break it up for digging the trench.  Amazingly high tech, no??  As things started falling over in the house and wine bottles in the wine cellar started inching forward right off the shelves, I had a major meltdown and marched  out there and put an immediate stop to that until they brought in a conventional jackhammer later that day.  (Still bad in terms of the heavy vibrations, but far better than the unbelievable slamming of the backhoe shovel.)    As another example, they brought in a concrete truck that was totally too wide for the job since it barely fit in the alley as it was and the uneven plates had it rocking dangerously close to the house.  After my extreme bitching, they finally brought in a truck that was a foot narrower.

Feel free to pass the pix on to others, especially those that are 'downstream' of all this chaos so they can see what is in store for them! 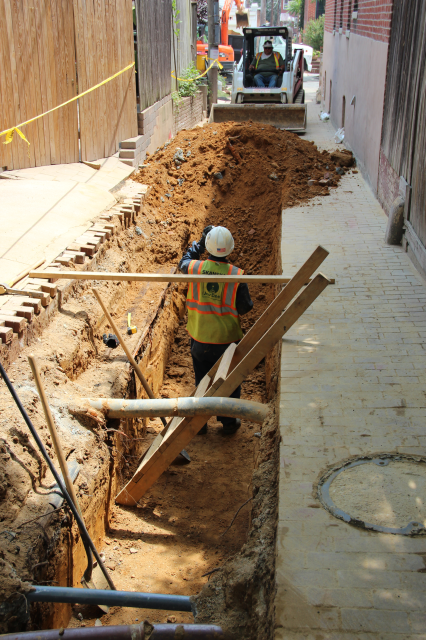 SAWED THRU BRICK AND CONCRETE AND BEGINNING OF EXCAVATION OF TRENCH 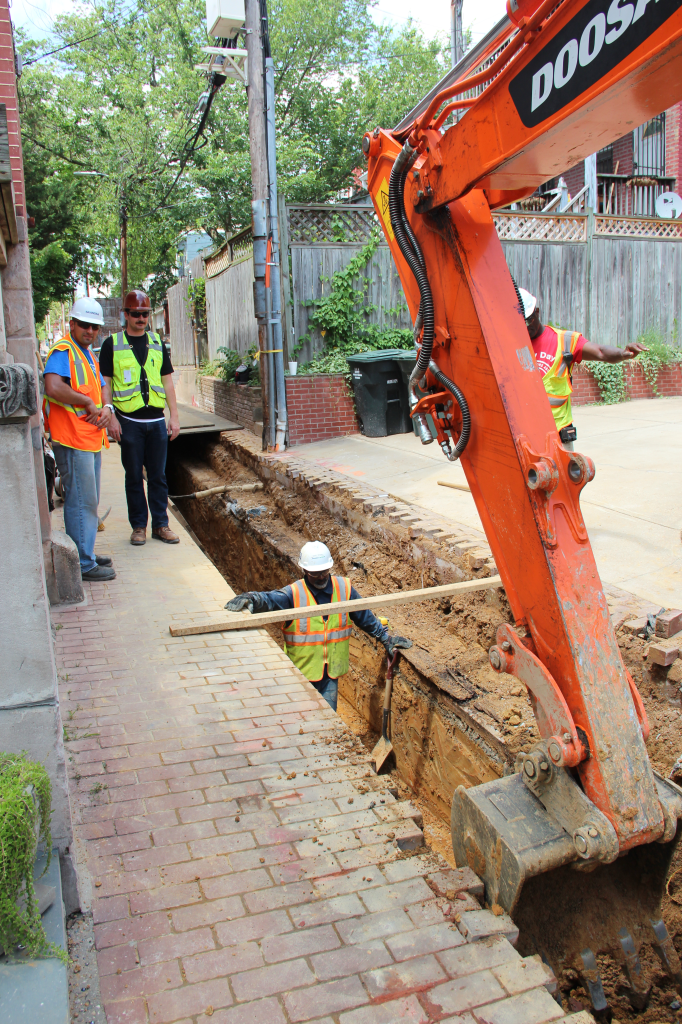 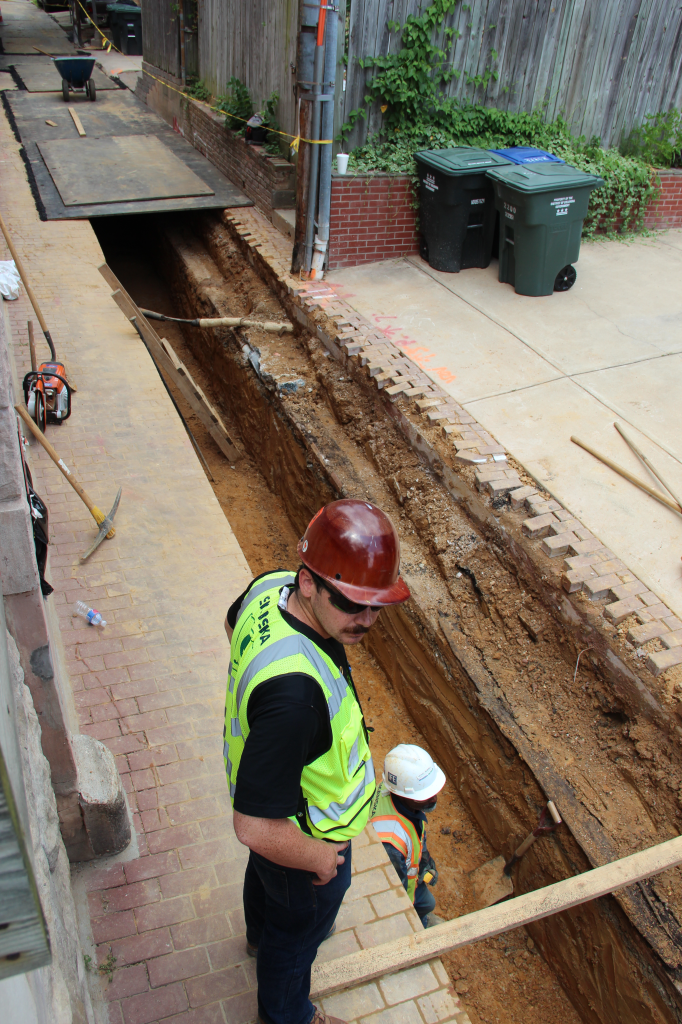 NOTE LADDER REQUIRED TO CLIMB OUT! 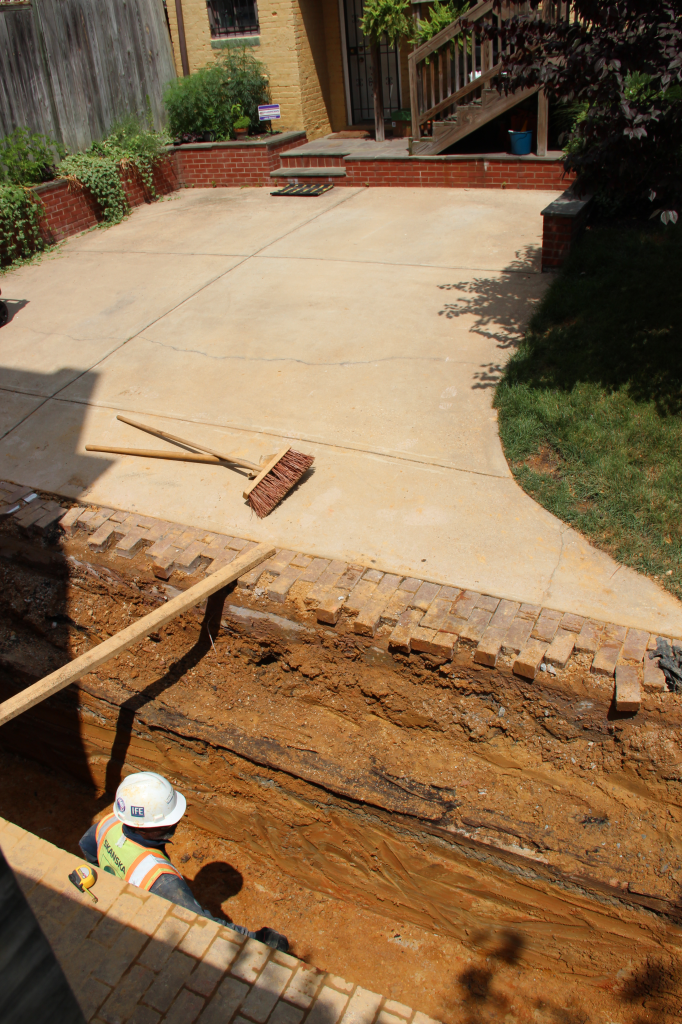 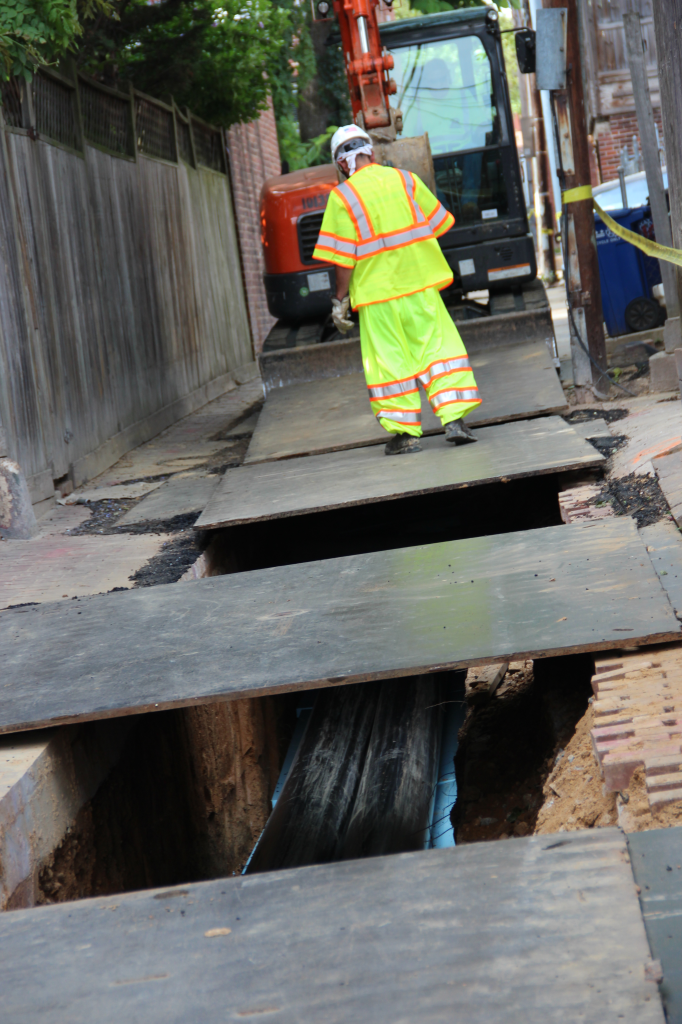 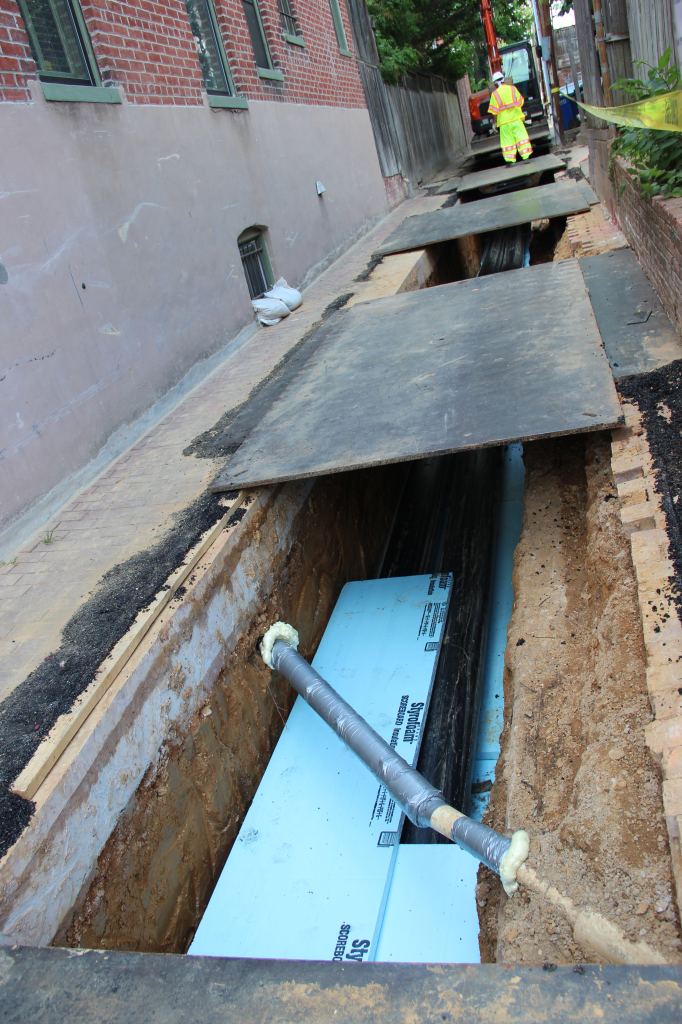 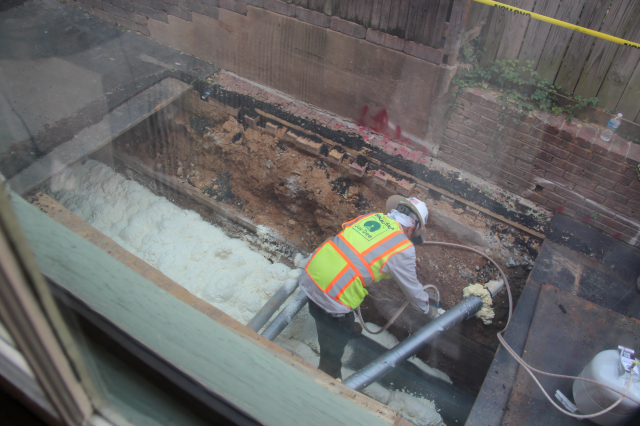 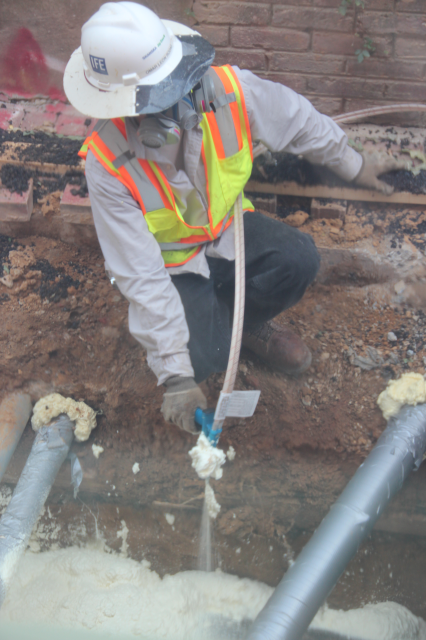 NOTE HAZMAT MASK!  (HOW MUCH OF THAT IS GOING INTO OUR HOMES?) 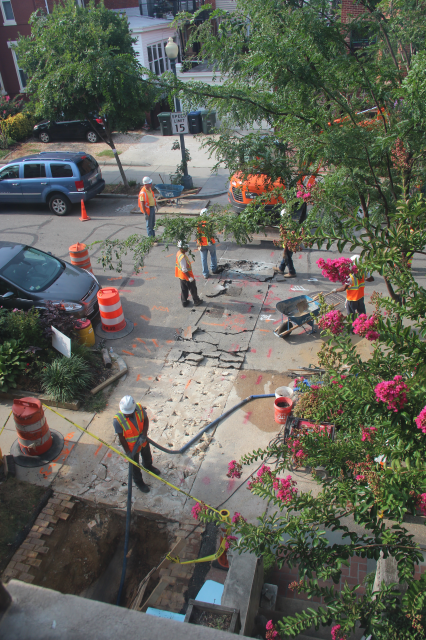 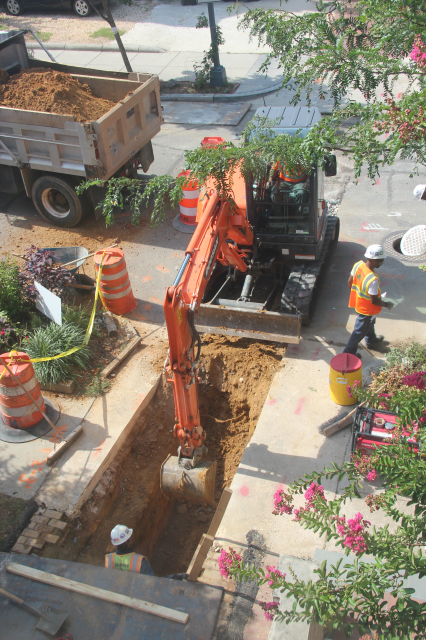 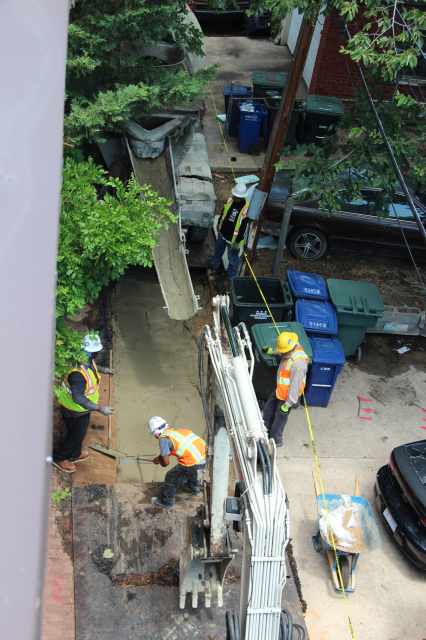 BACKFILLING TRENCH PARTWAY WITH A MID-LAYER OF CONCRETE ON TOP OF SPRAYED
FOAM INSULATION(NEVER MIND THEY ARE TEARING EVERYTHING OUT AGAIN IN 2 YEARS!) 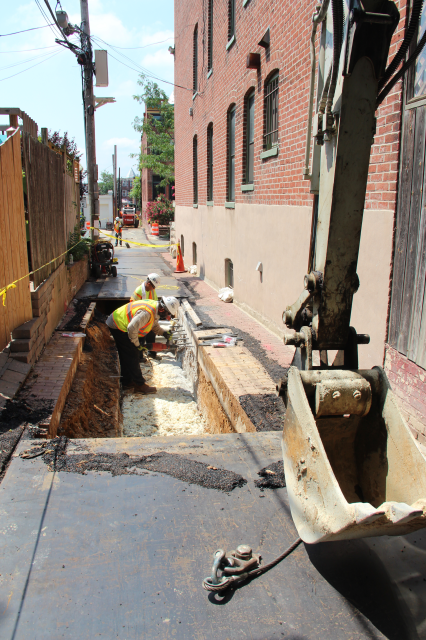 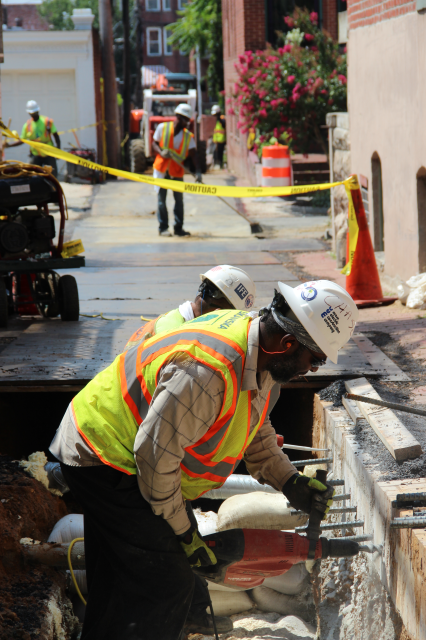 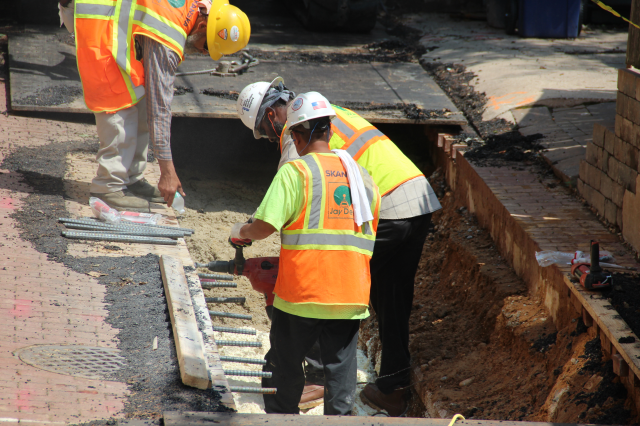 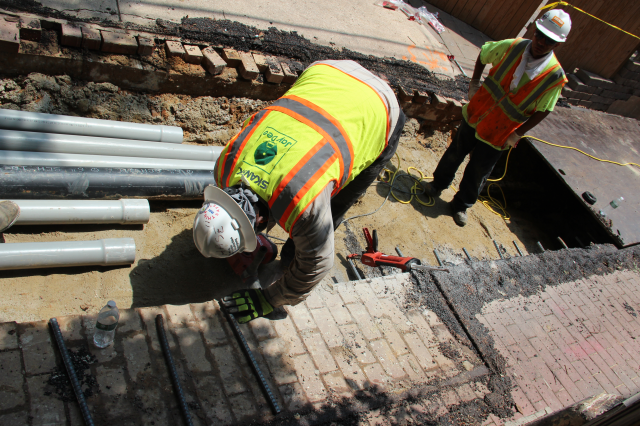 ON TOP OF CONCRETE, MORE PIPES! 'FOR COMPRESSORS AND COMMUNICATIONS' I WAS TOLD 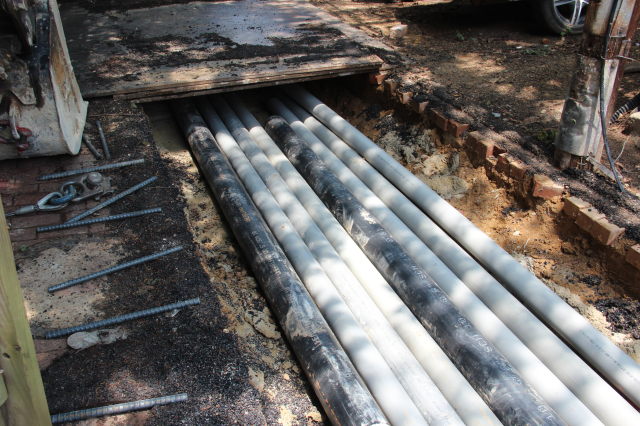 NOTE THE 'COLD PATCH' (TAR/ASPHALT WITH STONES) EVERYWHERE, USED AROUND THE STEEL PLATES,
AND NOW ALL UP AND DOWN THE SIDEWALKS AND EMBEDDED IN SOLES OF OUR SHOES
AND NOW ALL OVER IN THE HOUSE 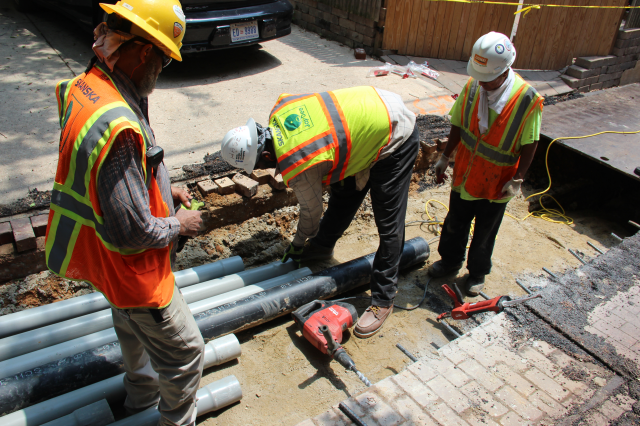 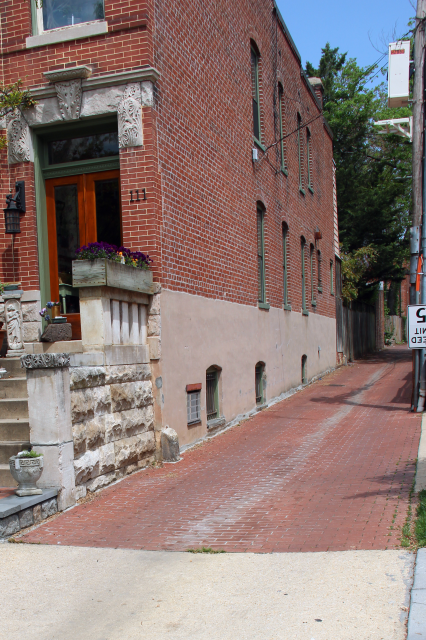 ALLEY SUPPOSED TO BE AS THEY FOUND IT (BELOW, BEFORE THEY TRASHED IT)--STAY TUNED AND SEE!!
Posted by Scott Roberts of Bloomingdale at 3:53 PM