And, no, I did not receive the press release discussed here. 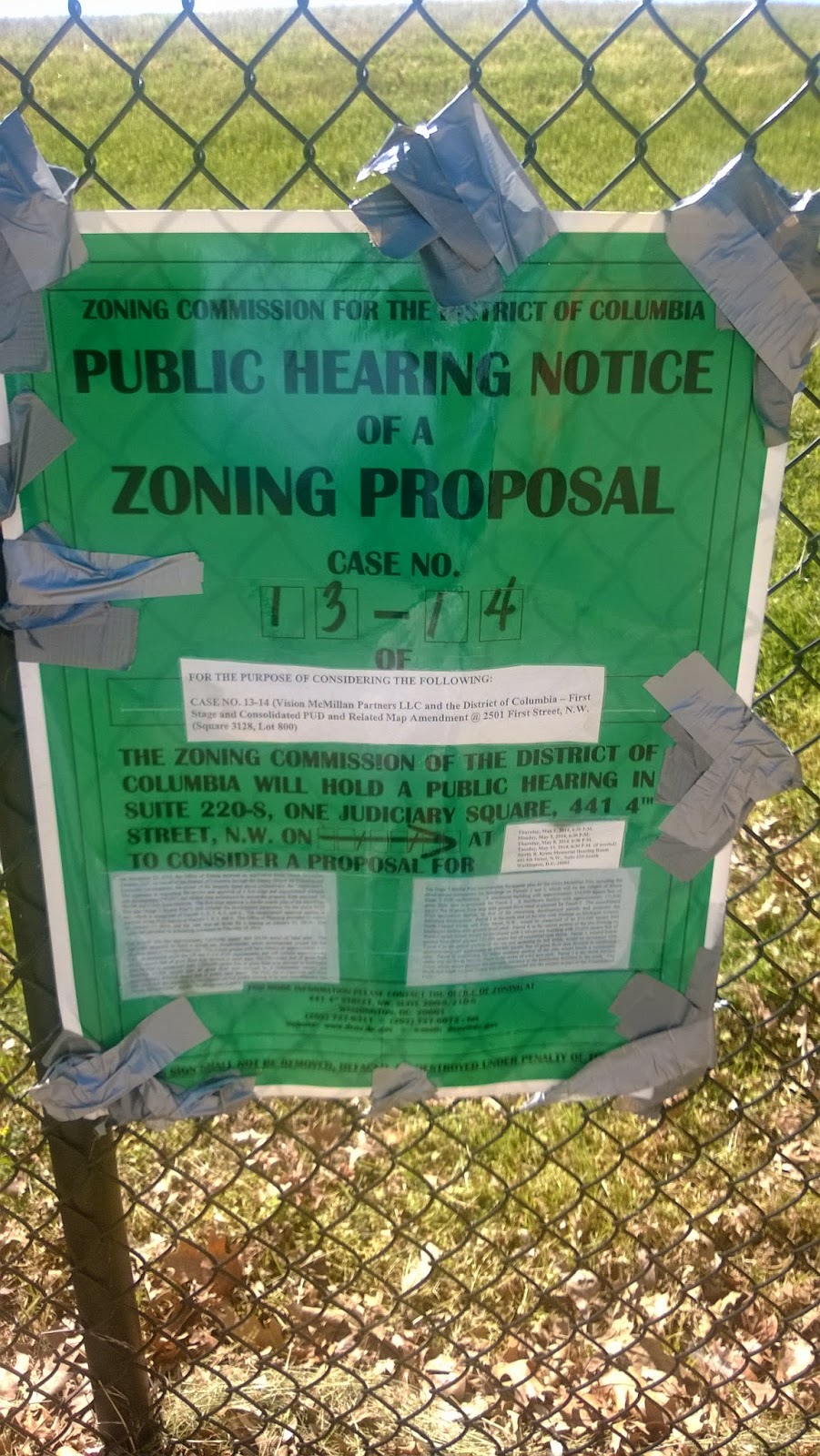 Posted by Scott Roberts of Bloomingdale at 7:12 PM

So, what do people think of this wonderful idea: Urging our public servants to give us a beautiful arts-and-play-oriented park -- along the lines of what Daniel Wolkoff suggests below -- rather than more concrete and cars taking over the McMillan space? Why should only Northwest D.C. and the suburbs have such spaces? Don't we deserve this, too?

I think it's a wonderful idea!

Kathy Sinzinger
10th Street, near Taylor
Daniel replies:
Thank you Kathy, but Bowser and Gray are setting up the massive $500 million, corporate "give-away" of OUR 25 acres of green-space to Vision McMillan Partners, it is called institutional corruption, the "surplus property" SCAM!. They have Baltimore Jamie Fontaine PR firm, and heavy weight lobbyists Carmen Group covering this atrocious violation of democracy! Carmen group is paid $10,000 a month indefinitely, so it is clear , VMP is going to fight as long as it takes to get this Sweet Deal at our expense. Corrupting the future of our city, our urban plan, more heat, less breeze , no open "Great Palces", no trees, more flooding. STOP THIS MONSTROSITY, save THE EARTH!
posted to Brookland listserve 7-28-14
What is that weird place on N. Capitol with those concrete silos?
McMillan Park is where your govt. officials want to pave over the green space, where they kept the public out of since 1986. The designated (sole-source developer) Vision McMillan Partners plan, is for 50 buildings, six private streets, 600 condos, two Medical Office Towers, an (as of yet untenanted grocery store with a lawn in front, McPark pretending to be a real park), a community center and 3000 parking spaces. An expected increase in traffic estimated at 20,000 cars per day on top of 30,000 already using N. Capitol daily.
> This last 25 acres is where" some people say"(www.friendsofmcmillan.org, www.McMillan park.com) they favor historic preservation and a 25 acre park. World class adaptive re-use of 20 acres of underground galleries for concepts as bizarre as growing enough vegetables to make DC food secure, and not dependent on trucks bringing produce from drought areas of California or Mexico, and Florida. Preserving a 105 year old, proven, safe water filtration system that can be a critical emergency life saver, as a crisis or natural disaster can strike at any time. How does this conglomerate of "Visionaries" not see the preservation of the underground water filtration cells, to clean the retained storm water run off for agriculture. They are flushing it down into river with the sewage, where their minds are at.
Other strange concepts like a family arts/cultural/performance campus come from dreamers with no feet on the ground, who probably went to Bethesda and saw an actual family educational campus in a historic restoration called Glen Echo.

The idea of a National Park like concert stage modeled after Wolf Trap, or Great Meadow in NYC's Central Park, are too healthy for the community and have also seemed unrealistic, as DC music lovers would be able to walk to shows and festivals, movies, opera, and symphony out doors while enjoying family picnics. Children would have a safe 25 acre bike and play area instead of asphalt school yards and the street.

The Monday night zoning determination was to send VMP back to clarify numerous vague aspects of the $700 million development plan
Notes from DC Zoning hearing 7-18-2014o follow.
Community input to make the impossible happen is required.

Let me affirm Mr. Wolkoff's pithy and insightful commentary on the McMillan Park debacle. As a social and economic justice advocate, I find this travesty of municipal and private sector green offensive in the extreme. AND ... let there be no doubt about the wishes of the People on this matter. Letters to the zoning commission ran 5:1 against this development!

My principal reason for participating in this debate stems from the manner with which our elected representatives and city officials, and staff have continually and consistently ignored all matters at issue with the exception of 'maximum density.' That is why McMillan Park has been opposed by the citizens since the beginning of the rush to development!

For the past twenty years the city and a succession of failed developers have attempted to build as many units on that site as possible. We, the people have opposed that kind of development. Now, in a pallid attempt to appease our demand for park space ... what have these "visionaries,' presented to us ... an insipid common place design of a modern McPark ... the fast food version. No global competition, no innovative design, just a back room give away of the last 25 acres of green space in DC and the last possibility for the North East to have a legitimate Park for our people!

We NEED Park Space in the North East. The North West has 5 times as many parks...Why? Do I have to tell you why? Why has that never been an issue with our successive administrations that have tried unsuccessfully to pave over the park and build on it. Instead they argue "It's fenced off and useless!" Like some alien race came to DC unknown to any of them and simply "fenced it in," leaving the city helpless to prevent it! Our city has owned this park for many years and elected NOT to take down the fence or to keep it in repair as required by regulation and contactual agreement with the US Gov't. Our city destroyed McMillan Park by neglect and now, instead of an innovative and unique site ... we have this ugly, common, and tasteless example of commercial exploitation. What cretins these people be!