Click on the link to read the entire Greater Greater Washington post and to see the images. 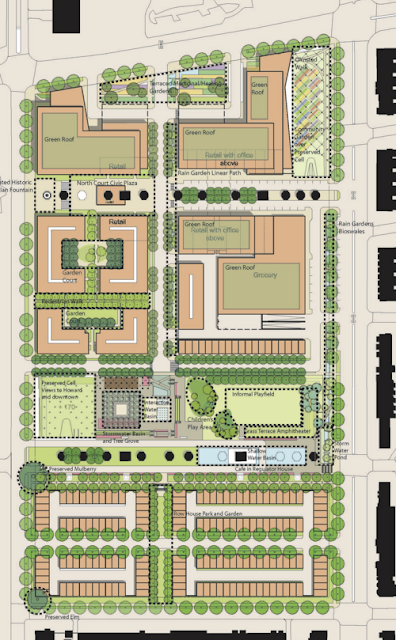 Posted by Scott Roberts of Bloomingdale at 12:49 PM

There will be neighbors who support what Malcolm has written and others who oppose his position.

Well, i've met Malcolm and I think he is generally interested in a better Washington DC. i think he is an idealistic young man with a great vision. However, i still disagree with his article. The Vision McMillan Plan is mediocre. I really is nothing out of the ordinary. Now for people that have been hankering for development on this site for years, this might seem like a good deal. However, I would encourage us all to "kick it up a notch." Folks, this is the last largest piece of undeveloped land in the entire city. It was intended (along with the reservoir and the Soldiers Home land) to become a part of the DC park system. Now, I personally don't think that it should ONLY be a park. I would like to see some amenities there too. However, it should be something quite extraordinary. This development here is nothing of the kind. It is just the run of the mill development that is happening in our day and age. It's kind of crap if you're honest about it. In the end, what does the average resident get? Well, you get twice the traffic, half the parking, a grocery store, a sort of park, a community garden long N. Capitol (inner city freeway), about twice the population in our neighborhood, all the rainwater runoff and associated flooding, and perhaps a Crate and Barrel. So, for me, why not wait and get something much better like a magnificent green space, urban gardens, outdoor biergartens, conservatories, museums? Why not something that will make us all proud? Something UNIQUE??? Is it because we are all so pressed to up our property values and cash out and leave the neighborhood? I would like to think not!! In any event, don't worry about your grocery store you get that sooner or later anyway. This particular plan is just the same old same old. And once you let it happen, well your stuck with it...just like that old tattoo that was so cool when you got it.

Hear hear! more park and less development. There continues to be open for lease storefronts up and down North Cap as well as other streets branching from North Cap. The only green space in the area are dilapidated lots. Let's not give this green space away for a strip mall.

No offense to Malcolm (whom I don't think I have met), but I felt like this news article was more of a PR release from the developer. I have attended several of the public meetings in the last few months, and have looked at the website and the brochure the "developer" produced, and, imo, the GGW article is overselling the progress in addressing neighborhood concerns. I agree that the plan has changed, increasing the percentage of green space, but my understanding is that plans for a community center are still up in the air.

I also think he oversells the plans for transportation and traffic. I was unable to get an appointment for the traffic "salon",but I did pick up a new handout on Saturday. "Discourage use of First St. going south with signage for 'local traffic only' does not sound very helpful. The other goal is to incorporate future projects, which does not sound very reassuring for my lifetime. 'Bike shared locations" are great, but I doubt many people who need to visit medical offices come and go on bikes.

Please - no attacks - I am no expert on McMillan. But it would be easier if more info was laid out that concisely addressed the important topics. The new web site has so much info, (not that there can ever be too much info), it is difficult to dig through and find the important details that people seem to argue about. So, maybe the filtration area of McMillan was never a park that people were able to use. That seems to have been south of the actual reservoir, where the fountain was, where concerts were held. But that area is not open to the public now, and I assume that there are no plans to reopen it. When asked how large that area was (in comparison to how much park space will be available in the current plans), no one could answer.

There is still work to be done. After all these years, why rush and mess it up now?