HPRB has not approved VMP`s Master Plan for McMillan


It needs to be cleared up that the HPRB has not approved VMP`s Master Plan for McMillan. In a press release, Ms. Tania Jackson stated that ``yesterday the Historic Preservation Review Board voted unanimously to accept the Historic Preservation Office`s staff report, which recommended accepting the Master Plan and building design concepts.`` The HPRB did not accept the Master Plan and building design concepts. Rather, the HPRB actions state:

The Board: (A) Determined that the proposal will result in substantial demolition, as defined in the preservation regulations, and therefore inconsistent with the purposes of the Historic Landmark and Historic District Protection Act; (B) Found the revised master plan has been developed to retain important character-defining features of the site sufficient to convey its historic characteristics; (C) Found the revised concept designs to represent an architecturally coordinated and cohesive approach that specifically relates to the character of the McMillan site; and (D) Asked that the project return for final review after approval by the Zoning Commission and Mayor`s Agent.

What this means is simply that they chose to support the Historic Preservation Office recommendations and allow the project to advance to the Mayor`s Agent and Zoning Commission. There was no `approval` of the master plan. I suspect this is part of the reason for recommendation (D) which requires that the project return to the HPRB for final review following review by the Zoning Commission and Mayor`s Agent.
For the full set of actions taken by the HPRB and the language for those actions, see this.
Thanks,
Mat Bader
Bloomingdale Civic Association McMillan Advisory Group (MAG) Representative 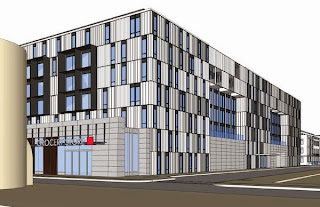 Posted by Scott Roberts of Bloomingdale at 7:27 AM