pop-up added to 2119 Flagler Pl NW; cupola erected on top; vinyl siding on the sides of the pop-up

Here are the latest set of pics of the pop-up at 2118 Flagler Place NW.

What do you think? 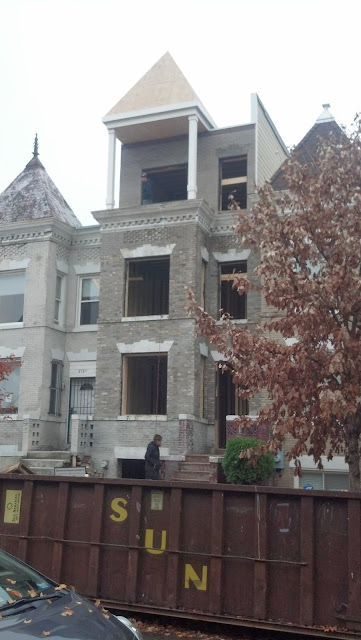 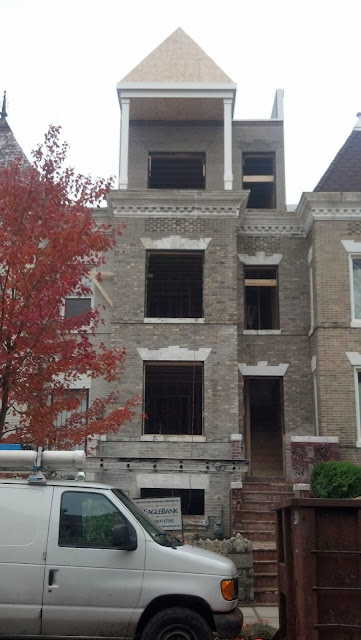 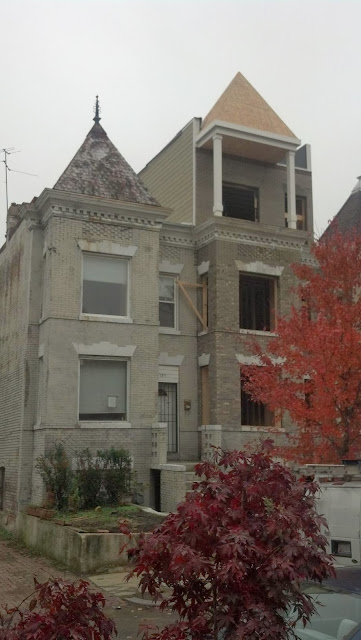 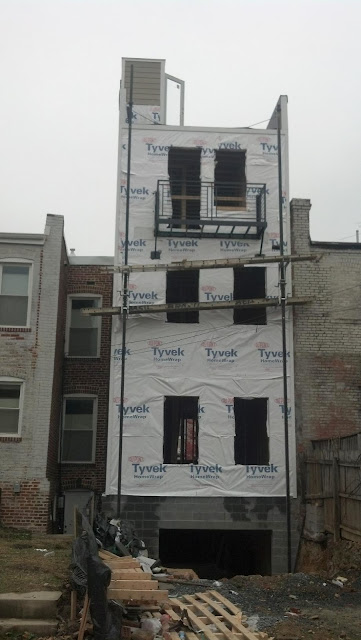 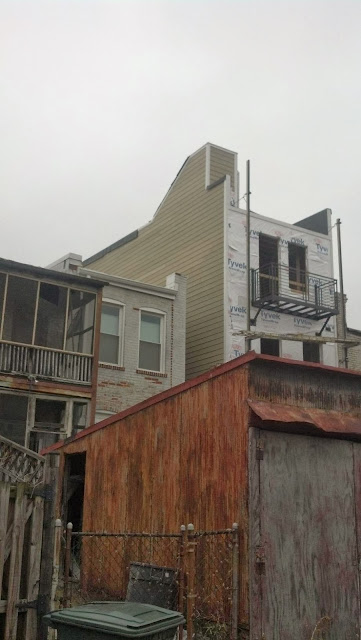 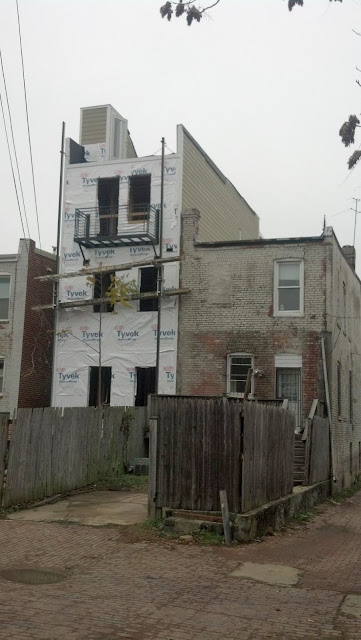 Posted by Scott Roberts of Bloomingdale at 8:54 AM

It would be better if they didn't try to do a half-assed attempt at mimicry. The angles of the "cupola" are all off, for example. Either get it *exactly* the way the neighbors are, or do something else.

Seriously? If this isn't a strong case for seeking historic district status i don't know what could be.

omg,that is so horribly ugly. Why do developers mix vinyl siding with brick? This is likely one of the ugliest homes now in Bloomingdale, next to the ugly renovations going on at 2nd and V and the ugly pop up that went up on first between U and V. WTF. Pity the people who buy this new place. and OMG, did anyone walk through 1735 first street today? Really?

Did I say this was ugly before? It's ugly as sin. We really do need to pursue historical designation for Bloomingdale or this greedy affrontery will destroy the character of the city.

it looks skimpy and stuck on. one good earthquake and all these new pop up tops will totter over or collapse in my opinion.

This pop-up faces the rear of our decks, we're thankful the occupants won't be able to see us from the top but an eyesore just the same. We're not in favor of making Bloomingdale a historic district, this is a zoning issue; we need to have the height limit lowered to 35 ft, that would solve the problem.

This is a zoning issue not an historical designation for Bloomingdale, historic districts come with a lot of rules and regs, not interested in that.

Zoning issues will deal piecemeal with this.... first you need an ordinance on Popups...then another one on new kinds of windows that people can install when you begin to see flippers replacing their windows with cheap aluminium ones. Then another one on changing the facade of your building when someone decides to tear out a bay window and put in a double glass door on the front. The only way to protect the historical look/feel of Bloomingdale is to get historic designation. You can resolve the others with zoning ordinances one by one by one, but not before a good deal of damage will have already been done...because once you realize that something is going to be an issue, the pop ups, cheap windows, modern facades...are already there...and they aren't going away after they are in place. Believe me, with the property pressures coming to Bloomingdale via McMillan you are going to see all kinds of craziness in VERY soon. When prices/rents go sky high, the pressure to build up and out becomes incredible and that's exactly why you're seeing popups EVERYwhere now.

Also, another ordinance on buying up historic houses, tearing them down and building modern apts in their place. Look at Bucktown/Wicker park in Chicago. Every 3rd brownstone is gone and a giant million dollar modern loft in it's place. If you like that fine, but that is what we are in for. Make no mistake about it. Without historic designation, Bloomingdale is going to look very different in 10 years. I lived this in Chicago....DC is following suit.

Todd, I would suggest pinging the BCA about historic designation.

Ok, done. I contacted Teri Janine Quinn about it. Will see if she responds. Would suggest that anybody else interested in reopening this debate around historic designation should also contact her to reinforce this idea. If there is significant interest, we can establish a task force to look into the matter further and push the idea forward.

Ten years ago, I saw drug dealers hanging out near this place on the stoop next door every night dealing in the alley. Since then, I literally watched a tree grow out of the side wall of the house next door (from the second floor) as it lay vacant. Is this the most beautiful renovation ever? Likely not, though in fairness, they are not done, and so far they have done more than I thought they would with respect to the brick work and some other touches. My point is that I am happy to see some positive activity here rather than just letting it lay vacant as so many properties have here over the years. If I decide to add a third story or roof deck in the future, which I believe is my right, I will do what I can to make it look good, but I am certain I will not come close to making everybody happy with my choice. I'm cool with that.

Would really, really encourage looking at less drastic measures than going Historic neighborhood. Especially with so many houses being rehabbed, going historic neighborhood would definitely put a chill on attempts to clean up a lot of the homes and energy efficiency efforts within the neighborhood. It may be well and good for folks who have already made the changes they needed to on their homes, but that's not everyone.

What "less drastic" measures might you be referring to, J.C. ?

Well, if a package of pre-emptive zoning ordinances were looked at and agreed upon by community members, it could work, but to do things on an ad hoc basis as problems arise won't work.

Hell,if this thing was erected next door to my house, i'd be livid. Not only does it deface the entire block, but my housing value would have dropped significantly. Case in point is the huge V street popup. Imagine that coming to a block near you soon.

I think that changes visible from the street should be agreed upon with the community. Changes to the inside or to the back of the house or roof decks? I don't care that much what happens as long as it's not in my face or taking away from the architectural harmony of the streetscape as it was originally conceived. I don't even have a problem with a decent, well integrated popup as long as it looks true to the original architecture and is harmonious with neighboring buildings....but I'm not in agreement with Flagler that everybody should just do whatever they want and we'll all be cool with that. No city works like that.

I haven't read enough of it yet to understand what exactly entails a "Conservation district", but what little commentary I've read on the subject (based off of similar opposition to pop-ups and roof decks, see: http://greatergreaterwashington.org/post/19436/preservation-board-members-regret-ever-allowing-roof-decks/), it appears to be a less restrictive form of preservation. How it exactly differs, I don't quite know yet, but if it's something to be piloted, this may be an opportunity to do it.

I'd like to see a conservation board as something that doesn't necessarily restrict pop-ups and other additions, but can have a say on the quality of materials being used and the facade to match the area (i.e. no vinyl or terrible copies of cupolas) on public facing streets.

To your point, then maybe some group/committee needs to be formed to look at possibilities for the neighborhood. If the bulk of neighbors don't like the idea of placing any restrictions on what happens to a house in the neighborhood I'd encourage them to come out and vote as such at BCA meetings. But if the community agrees that something needs to be done (whether it be historic designation or conservation) then setting up a group to look into these efforts and gauge the interest of the community in moving forward is a solid approach. I'd encourage anyone interested in the topic to attend BCA meetings, reach out to BCA reps, or stay active in some fashion to make their opinions known. Just my two cents.

Check out what is happening just a few blocks from us on Richardson- not a pop up but all new construction - Scott posted about it back in October and PoP has some new pictures.

Some people may not think that a pop up can be added in an historic district, but it can be if done in a manner that is not detrimental to the architectural integrity of the neighborhood (those are my words, not a professional definition). If you don't think that a disruptive pop up hurts the neighborhood aesthetic, that is a matter of individual taste, but with many more popping up, you will probably find it will have a negative affect on your property values.

The Comprehensive Plan suggests:
"Action MC-2.7.B: Conservation District Consider the designation of the Eckington/Bloomingdale/Truxton Circle neighborhood as a Conservation District, recognizing that most of its structures are 80-100 years old and may require additional design guidance to ensure the compatibility of alterations and infill development."

This is from the MidCity East study:

GOAL: Create the structure and engage the tools for pursuing
neighborhood-led conservation efforts.
MCE 1.1 - Develop a community-led neighborhood
conservancy to lead historic preservation efforts and build
consensus around preferred preservation strategies in
Bloomingdale.
MCE 1.2 - Explore options for designating Bloomingdale as an
historic district or a pilot conservation district. After the
designation, or completion of the pilot project, share lessons
learned with other Mid City East neighborhoods.

There is much more here, including an explanation of a neighborhood conservancy: