WCP Housing Complex: "pop-ups may not be popular, but they sure are profitable"

Aaron Weiner continues to cover pop-ups in the District.

Pop-Ups May Not Be Popular, But They Sure Are Profitable


D.C.'s most notorious residential pop-up is for sale as condos, and they aren't cheap.
Over the past year, a two-story rowhouse on V Street NW has grown three additional stories, towering over its neighbors and arousing ire from locals and architectural aesthetes. It's assumed a grandiose name, The Ella (think Fitzgerald, along the lines of the nearby Ellington and Langston). And now its owner stands to turn a healthy profit.
The ground-floor unit, a 750-square-foot one-bedroom, is priced in the "high 300s," according to TTR Sotheby's realtor (and former Washington City Papersales rep) Nick DeBlasio. The 1,400-square-foot unit occupying the second and third floors is on the market for $799,900. And the choice unit, a 1,450-square-foot two-bed/three-bath with a balcony and monument views from its much-impugned vantage, is going for $850,900.
The total for the three units: more than $2 million.

The latest sale price and date for the rowhouse are not listed in the city's property records, but DCist reported earlier this year that the purchase took place in September 2011 for $386,000. (The current owner of the house is listed as a limited liability corporation with an address in Leesburg, Va., where no one could be reached.) The house was assessed this year at $383,100.
Of course, the pop-up didn't come cheap; a D.C. contractor I spoke with this spring said a high-quality pop-up costs somewhere in the $300,000 range—and a three-story pop-up is likely more. Even still, we're probably looking at a profit of more than $1 million.
And so there's a silver lining for The Ella's V Street neighbors who are upset about losing their block's uniformity and a good chunk of their natural light: Now that the value of the space above their roofs has been established, their property values effectively just went up. 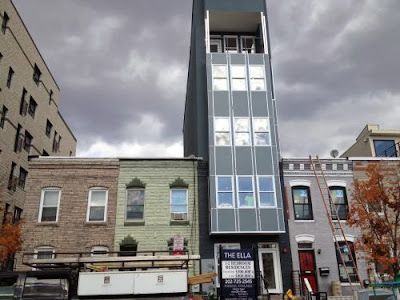 Posted by Scott Roberts of Bloomingdale at 3:57 PM