I hope this email finds you well.

I have created a Potential Traffic Calming Measure (PTCM) checklist or template for the Advisory Neighborhood Commission, Bloomingdale Civic Association (BCA), and Metropolitan Police Department. Maybe the checklist will help you guide the conservation between all stakeholders as you gather and analyze the existing transportation challenges/impacts/conditions; and community concerns.

Below are some historical challenges faced by the Bloomingdale Community:

When discussing proposed traffic calming measures, it’s important to identify the cut-through traffic and four major arterials that made it hard for residents to get to schools and parks. Traffic management studies have shown that collaborative input from traffic engineers, residents, and enforcement (metropolitan police department) creates a solid foundation to design streets that work for people of all ages and abilities, connecting people to places like schools, recreation centers, retail and transit services.

Bloomingdale is an oblong neighborhood extending downhill from the McMillan Resevoir to Florida Avenue (the historic “boundary street”). The downhill topography has contributed to the significant sewage back ups the neighborhood has suffered in recent years during heavy rain events. The neighborhood has a regular grid of streets. Heavy traffic volumes are common along the north-south streets and particularly First Street NW. Past traffic calming interventions on the east-west streets have significantly reduced the opportunity for commuter traffic to divert onto these local streets.

Numbered below are some examples of potential traffic calming measures, (some examples may not apply specifically to Bloomingdale):


2.    Raising a portion of a road surface can create discomfort for drivers travelling at high speeds. Both the height of the deflection and the steepness affect the severity of vehicle displacement (vertical deflection):
3.    Horizontal deflection, i.e. make the vehicle swerve slightly:


o   Reducing speed limits near institutions such as schools and hospitals


o   Vehicle activated sign, signs which react with a message if they detect a vehicle exceeding a pre-determined speed. Embedded pavement flashing-light systems which react to pedestrian presence at crossings to signal drivers and increase awareness.


6.    Safe and designated bicycle connections, particularly to and from the downtown to the south and west and a need for community bicycling corridors – those suitable for youths, families, and novice or cautious cyclists uncomfortable mixing with or adjacent to general traffic.


In 2019 US DOT analyzed the data collected from the pilot projects and determined “Waze data produce reasonably good estimates of police-reported crashes.” This pilot has laid the foundation needed for a future nationwide scale-up of a crash count tool.”


Let me know if you have any questions. At your convenience please forward a copy of the BCA’s meeting minutes from 02/25/19.


Below “Next Steps” as presented by Ms. Dalphy, Transportation Engineer to the Bloomingdale neighborhood on 02/25/19. 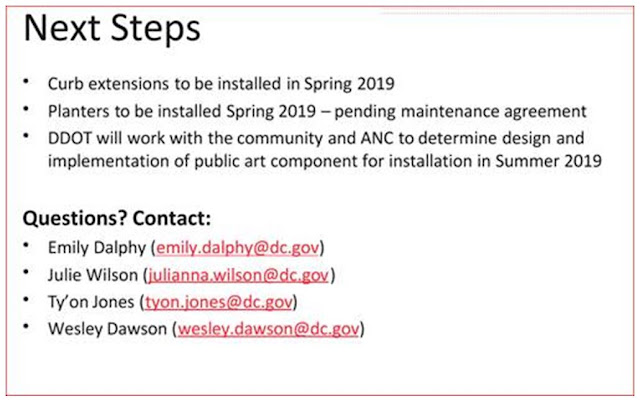 
Thank you for your call this morning.


Per our conversation feel free to provide me with additional information.


A traffic calming assessment concerns a residential neighborhood block and any measures installed that will affect neighbors on the block, therefore 75% of households on the block are required to sign a petition to establish minimum neighborhood support and consensus as part of the assessment application. Only one signature per household will be considered. It is important to understand that a completed petition doesn’t necessarily guarantee that calming measures will be installed on the study street, but it does allow the District to proceed with a traffic study knowing that there is a consensus among residents.


All traffic concerns which result in a traffic safety or traffic calming assessment have a service level agreement of 120 days. This period allows for DDOT staff to review the initial application ensuring its completeness, engage with the petitioners on the concerns, conduct data collection activities that are limited to certain days and times, and complete a thorough study.


I have copied your ANC/SMD and PSA representatives to keep them in the loop (see below tables).

Let me know if you have any questions.

Posted by Scott Roberts of Bloomingdale at 6:37 PM