Pat Mitchell: "How a Plan for Traffic Safety Morphed into Advisory Neighborhood Commissioner-Sponsored Referendum on Parking"


This message references the most recent ANC5E meeting, which was held on Tuesday, 04/23/2019, at the Friendship Armstrong Public Charter School at 1st and P Street NW.

When the Advisory Neighborhood Commission 5E sat Tuesday night plowing through its usual agenda of business and community items it addresses every month, there had been an accident at R Street and Florida Avenue earlier that morning.  Wouldn’t be surprising if any of them knew about it, even the Commissioner who actually lives on R Street, NW.   Most folks are not eyewitnesses to traffic accidents, unless they’re in one and most probably hear about this sort of thing through the grape-vine, on the news or maybe a community blog, as I did.  (See Scott Roberts’ email of 4/24/2019)

As fate would have it, the very next day, another accident occurred during the evening hours, this time, at North Capitol and R Streets, resulting in a mangled car, multiple police and first responders on the scene –the usual stuff that happens when these unfortunate events occur.

But occur they do and, unfortunately, as the community grows denser and travelers look for alternative routes and modes of transportation, it’s probable the occurrence will increase, not decrease, unless active measures are implemented to prevent it.  (See Scott Roberts’ email of 4/25/2019)

But setting aside the most recent traffic accidents, if you live in Bloomingdale and travel interiorly during morning rush-hour you know that navigating traffic is combat – for cars, cyclists and pedestrians. You know, for instance, that pedestrian crossing at R and Florida, First and R and First and Rhode Island, both north and south sides, is precarious; you know that east/west travel on R Street to First Street is a raceway for Fed Ex trucks, with cars, cyclists and pedestrians navigating in the mix. Even non-peak hours pose danger, as southbound cars on First Street barrel down from as far back as Randolph to make the light at Florida.  Heaven help the unlucky pedestrian caught in the crosswalk.  The examples are numerous but none more problematic as the First Street corridor, the default commuter route in Bloomingdale.


Bloomingdale Civic Association (BCA) for at least three years, has routinely hauled in DDOT officials into its monthly meetings so that residents from all over Bloomingdale, not just those who live on First Street, could express their frustrations with traffic safety issues.  Some folks absolutely believed speed bumps or rumble strips along First Street would solve the problem, others had different ideas.  Whatever anyone thought was the better approach the discussions were always focused on improving safety.

Finally, after years of meetings, DDOT presented a plan for traffic calming measures to address safety on First Street.  BCA members were happy to get something more than a shoulder-shrug from DDOT.  The major part of the Plan addressed striping the cross-walks, adding spikes [flexiposts] and bringing all east/west streets connecting at First Street in compliance with current DDOT regulations which require parking spaces to be at least 25 feet away from a stop sign.  The enforcement of this regulation meant that some corners would lose parking spaces – up to two.  There were other soft finishes, like plantings and decorative planters but since I don’t speak traffic, you’d have to see the renderings.  Needless to say, the Plan was approved.  Most members were satisfied that at least some measures would be put in place to ensure a safer First Street experience.  But things go off the rail.

At Tuesday night’s ANC meeting, proceeding completely unexplained, the Commissioner for 5E-06 reintroduced the matter for the purpose of support of a Resolution to exempt either all of First Street, NW, South of Rhode Island, or two streets, Randolph Place and R Street, (Hmm) south of Rhode Island.  It’s unclear to me which is accurate. The Resolution says both.
There was no meeting held, no notice given, no comments sought for the exemption.  The Commissioner introducing the Resolution simply stated she had “talked with her people”.  After a bit of procedural wrangling, the Chair allowed some residents who were present to speak on the issue.  Each one, without exception, spoke on safety concerns.  Most repeated their frustrations about the years of inaction by DDOT.  Those more familiar with the Plan expressed their belief it was better than nothing, and that it could possibly lead to more improvements, if shown to be inadequate.

And then the morphing began.   It was cognitively strange, that not a single Commissioner addressed safety concerns, directing their comments instead to parking – just parking – not car safety, not pedestrian or cyclist safety, not even an inquiry of the presenting Commissioner concerning what notice had been given to residents about the Resolution. The message was clear:  Parking trumps everything – even safety.  Only one Commissioner voted no, two abstained, the rest supported the Resolution.   I’m not sure how this happens when protocol and accountability should be expected, but it did happen.  Inexplicably.

There must be transparency and accountability for how the decisions are made at the ANC level, otherwise how can residents trust the process?   Any Commissioner expressing authority to do something should be required to show the receipts.  Although I’m disappointed with the way this was handled, I do not expect this so-called “Resolution” to be the last word because I don’t see how the ANC can require a District Agency to not enforce its own laws.  If that’s possible, this whole “great-weight” thing ought to be seriously reconsidered.

These comments are based on my observations and participation in Tuesday night’s ANC meeting.  Pat Mitchell 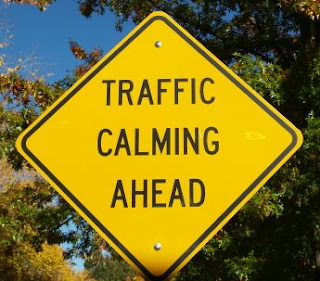 Posted by Scott Roberts of Bloomingdale at 10:39 AM

Pat- Thank you for sharing a summary of the recent attempts to have DDOT implement a traffic calming program for First Street, a problem that has long been acknowledged by DDOT. I hope you have shared this letter with DDOT and the Councilmembers.

I don't know the dollar figure of what has been invested in the studies of 2003 and 2013, but it is now 2019, and this is the first time that DDOT has made a genuine commitment to act on its promises. Community members have invested their personal time seeking meaningful solutions, and while some neighbors are skeptical that the proposed plan is the best solution, it is the one that DDOT is willing to install NOW. (FYI - DDOT received an award for the 2013 study in recognition of their community engagement. Raise your hand if you participated in the study.  )

As for the resolution itself, can anyone share the Resolution that was voted on at the ANC meeting 5 days ago? Why are these types of resolutions not posted in advance on the ANC website so impacted residents will know what is on the table? While it is understandable that the minutes from the April meeting are not yet available, the resolution should be. (The most recent minutes online are from December 2018, so there is no written record of what the traffic calming discussion was at the March 2019 meeting.)

Again, thank you for sharing your thoughts on what has surprisingly become a controversial issue. It would be wonderful if someone could offer a solution that 100% of the residents could agree to, but then there is no guarantee that DDOT would approve and implement that solution. That would leave us with the option of "tactical urbanism" that has occurred in a few problem spots across the District, but short term actions seldom solve a long term problem that is only going to get worse.