Chef Christina Crosdale embraces the
Jamaican side of her German-Jamaican heritage in the kitchen. She learned to
cook from her late great grandmother, beginning when she was five years old.
For more than a decade she worked for the US Postal Service while perfecting
her craft of cooking on the side. After obtaining her culinary arts degree from
the Art Institute of Washington, she went on to build her own catering company
— The Exotic Chef — in 2012. Stop by the market table this weekend to sample her
freshly made Jamaican curry chicken. 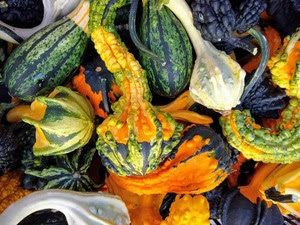 Despite the heat, it is Fall and we have gorgeous gourds and winter squash.


At Market This Week:


Tip: Did you know they have dog treats?


TIP: Did you
know that the spirally kale fusilli makes the best pasta salad? The spirals
capture all the bits and pieces of chopped vegetables, meats, cheeses and herbs.


TIP: Have you slathered an avocado with their salsa so verde?!


Produce Plus is on going at Bloomingdale
between Reid’s tent and Number 1 Sons. Please come early if enrolled.


From
Clara, the Teds and Robin overseas
Posted by Scott Roberts of Bloomingdale at 6:02 PM