We are asking for your help in finding out if someone might have seen who took down and trashed/got rid of my decorations from the White Bicycle Fence- Art Installation at our park on Rhode Island and 1st Street NW, sometime early last week or the previous week.

To my surprise one day driving home - I noticed that all the decorations - many colorful whirlies, other hanging banners, some nice pink umbrellas that were lady bugs, small American flags were All Gone from the park and nowhere in sight.

Only thing that was left was the big Banner and 2 smaller ones on the ground that say "Thank You to Healthcare & First Responders" that we ordered and placed there at beginning of May, as we needed to honor these heroes and still do for all their work saving lives.

As you know there are no lights in the park - so it could have been done at night.

Please realize that Alberto & I have for 12 years- been paying with money from our pockets - for the maintenance, hauling of debris from the trimming of trees,  mulching, buying new greenery, and flowers occasionally, various nice colorful decorations and banners you see and enjoy year-round and at major Holidays! We do it to bring smiles and happiness to people.

We have never asked for donations or been offered any! Neither asked for help decorating the park, as for us it is an artistic endeavor to enhance our now trendy Bloomingdale neighborhood.

Over the years as you can imagine this has added to thousands of dollars and having a location to store them. We are still glad to do that.

So, for those 12 years - about 3 times a year I retrim the trees up, and every month I still weed around the bicycle area and mulch, clean the park and take out & replace the dead plants, and haul the debris to the City Dump.

Worst part is that if someone in our neighborhood had an issue with the decor - there are 2 plaques that have my name and phone number - that someone could have had the courtesy of calling us and letting us know. Plus, several of you know exactly which artsy home is ours.

As we normally post a Holiday Greeting to our neighbors from the decorated White Bicycle Fence Park several times a year in Scott's Bloomies Neighborhood you are familiar with the various decor and  us.

Worth Noting - that in the 12 years the White Bicycle Fence has been up and decorated numerous times, Nothing has been Stolen, Taken, Destroyed or Damaged Before- as well as at our decorated home! So, we are very grateful for that part and the care & vigilance that some neighbors have had on the park and our home

But it is disappointing & upsetting especially in these heartbreaking times of Coronavirus pandemic and political and social unrest - for this calculated theft and destruction of those decorations to occur.

If you have observed the attachment of said decorations to the bicycles (that are well anchored on the ground also with rebar deep in the ground) and the rebars behind the bicycles - you know I firmly zip tie them, so they don't blow away or are taken.

So, someone came with a pair of scissors or knife and cleanly cut them all - to our surprise - there were no zip ties debris or left-over parts of the decorations on the ground around the bicycles.

When we went and check the garden area and surroundings and could not find any decorations left anywhere - we also noticed that 8 tall rebar had been unearthed/pulled out and placed on the Rhode Island curb off the Cleaners. Hard to do as I really bury them in the ground, so they are safe. I use the rebars to hang the seasonal banners that make our neighborhood and park welcoming.

We went to cleaners and asked if they had seen anyone take the decor down and they said they not seen anything or no one.  We made several calls to neighbors we know on our street and none knew who did it or when - they just assumed I was about to decorate bicycles for Holidays.

Myself, my partner Alberto, and the neighborhood have been complemented over the years that I have been doing this for how wonderful, welcoming, whimsical, and nice it is to have this decorated park  in our neighborhood entrance and to all our restaurants on Rhode Island Ave and 1st Street .

As our focus was to honor the Healthcare workers -and because in June I started having mega problems with my right knee and ended up having a knee replacement surgery in July and a lengthy recovery; we decided not to change the decor for the Fourth of July or Thanksgiving. So, my plan was to change it (Leaving the still great looking Thank you banners) for this upcoming Holiday Season, now that I feel better. But go figure everything had been taken down.

*And to make matters a little worse - we just saw that someone had taken it upon themselves to do a little decorating of their own for Xmas on the bicycles.

As we have already spent money on this year's Xmas/Holiday decorations, we would like to ask kindly that whoever added that decor to please take it down this week - as we do not want to be rude and take it down and dispose of it- as it was done to us. Maybe use that decor of theirs at the park across from Bear Cafe off 1st Street. I will start decorating it by Thursday or Weekend.

Let me state some facts:

When I first moved to Bloomingdale 12 years ago to our home on T Street, as I am a landscape designer and sculptor/artist,  I liked the park and saw its potential.

I originally asked the businesses around then, if I could fix the park and create something fun for everyone and they were all delighted

Park was in disarray, with tree branches way too low, minor bushes and ragweed and unkept grounds. Now all the city does is mow the lawn there.

So, I trimmed the trees up so it would be safe to walk at night across the park for our neighbors, planted drought tolerant year-round greenery and seasonal flowers.

I created then 2 garden areas - smaller one across from the restaurant so they would have a nice view, and at top of hill in front of cleaners what now is the Bicycle Fence.

When Dijton owned the first restaurant that was at the other side/across at corner of the park, he allowed us to use his long watering hose to water the 2 garden areas.

As there is no water connection in the park and now neither the cleaners or the new restaurant owners wanted to allow us to use their water sources, as they were worried that their water bill would go up. We figure creative ways to water the plants that need it.

It was and still is important to water when there are long drought periods in DC.

As when I lived in Manassas, VA for over 25 years - I was known as the "Bicycle Fence Man", as my home there had on a popular and busy street - about 30 bicycles that I recycled to bring the whimsy to that neighborhood.

I also decorated them all for the major Holidays and ended up becoming a popular destination for local neighbors, families, school buses and visitors to take their photos with the bicyles - as it Happens at our Bloomies Park Now.

So, when I sold the house and moved to DC, I took some back home to Ohio,  donated some  of those bicycles to a couple of friends who created their own White Bicycle Fences and I brought to DC the 6 that are at the Park.

I even hauled mega sized rocks you see now around the Bicycle area, as to deter dogs from going into the garden area to relieve themselves- as owners allow them. Said plainly, dog piss kills any plants there.

The smaller garden across the park, I had to take out - as owners who would be walking their dogs in the park - despite the rocks and signs of "Do Not Let Dogs Relieve Themselves in Gardens Areas" , still would allow them to go into the garden, so it became too expensive and frustrating to keep reworking that garden.

Any information on who might have taken and destroyed our park decorations please feel free to email me tomnoll55@gmail.com.

Much appreciated and wishing everyone remain safe, healthy and Happy Holidays. 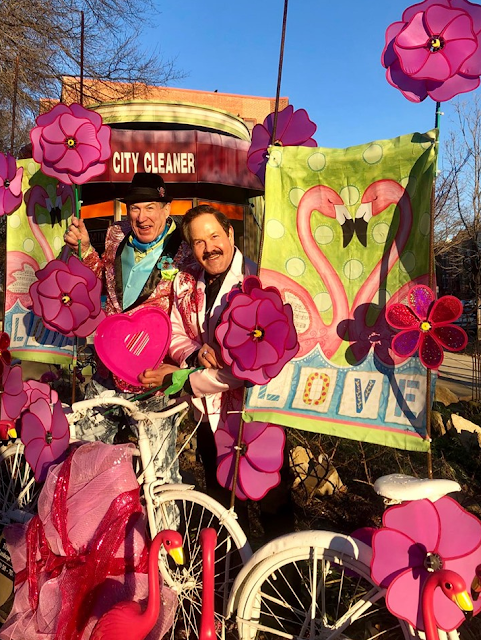 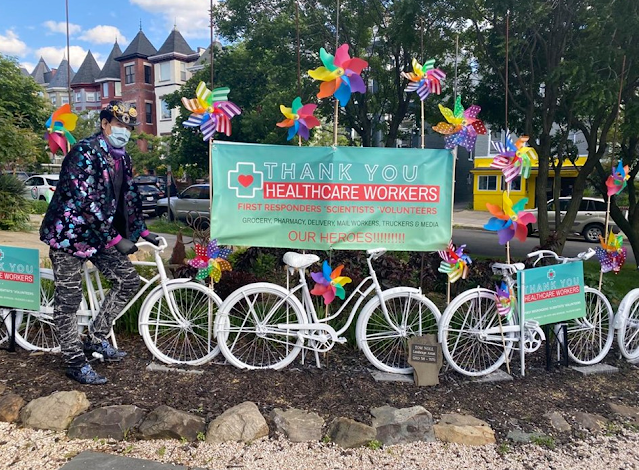 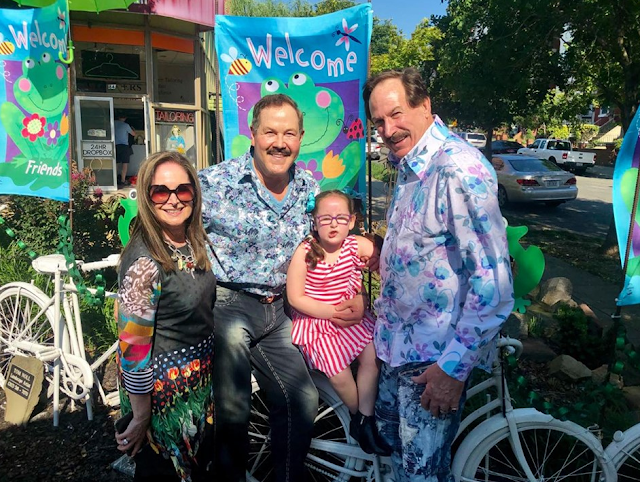 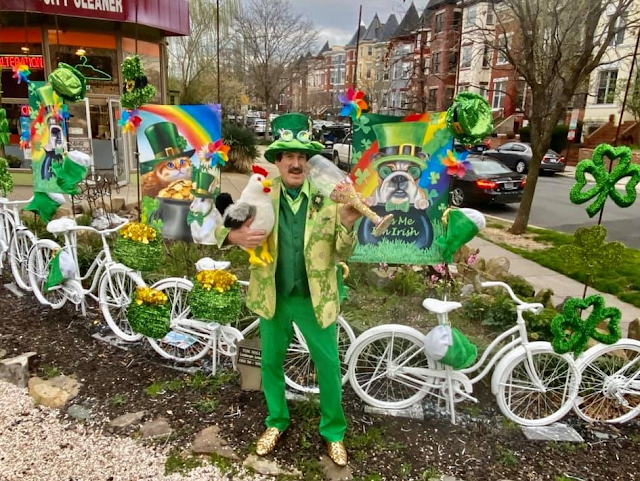 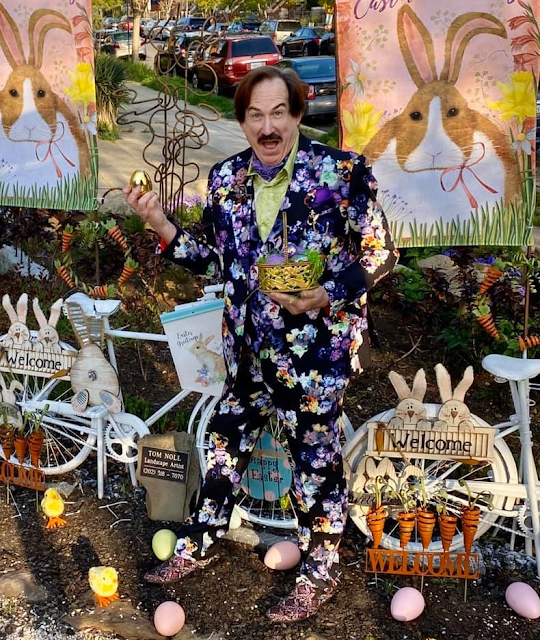 Posted by Scott Roberts of Bloomingdale at 3:46 PM

I am so sorry to see this. The decorations are wonderful, and bring a lot of joy to the neighborhood. Thank you for maintaining them so long.

Agree!!! I lived in Bloomingdale for 10 years, and this was one of my favorite features of the neighborhood. Always made me smile. So sorry this happened. Thank you for all you do!