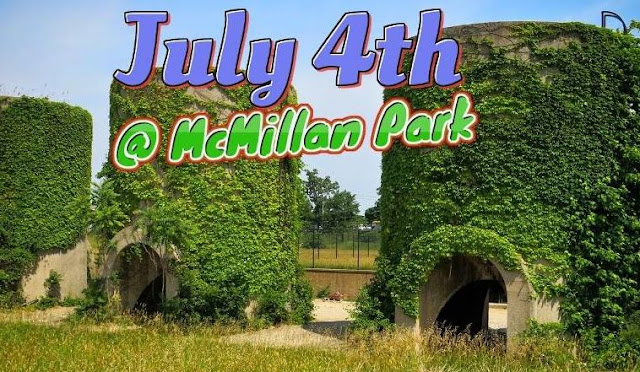 Starting at 6:30pm, this family-friendly event, with Rooftop views of the downtown fireworks display invites you to learn of the amazing history of this national landmark & maybe you will discover the next dinosaur bone near McMillan!

For more information go to:
www.tinyurl.com/july4thmcmillan

Why should we fight DC corruption and the theft of McMillan Park?
Our government is a disgrace, just the number of felons who have had their fingers into the VMP deal would be called RICO, racketeering. We have to change that, obviously Mayor Bowser has not missed a single corrupt opportunity yet. Vincent Gray, not even elected, and the biggest liar and corrupt official ever, is protected by Federal Prosecutors, and is back like a vampire.
WHY save our publicly owned 25 acre green space, and historic civil rights cultural site? It is ours, and no corrupt official should be stealing it from us. Where is the ballot referendum?
The government is supposed to work by gaining consent of the governed not by hiring PR firms to impersonate the public, that is unconstitutional.
We can become "Founders" of DC Central Park, community builders, is critical, green open space is critical, reducing the "urban heat island" is critical,reducing carbon emissions critical, reducing traffic, and air pollution.
Think about a DC Wolf Trap, to walk to on summer eve and hear big outdoor concerts, watch Shakespeare, kids festivals, ice skating, carousels, classes in art in re-purposed historic structures. We can "sunlight" Tibor Creek for an urban beach and waterworks, see Miriam Gusevich site design.. The benefits of large open urban green space is so self evident, Bowser and Mcduffie really have to suppress the most common sense, beneficial options, to deliver this multi-billion dollar bonanza to the under the table dealings.
Keep exposing this corruption, we can have the total best option, STOP VMP, kick the DC govt. off the job, after 30 years of gross abuse of power, racist economic class discrimination, gross malfeasance in office, and wasting 10's of millions of public funds. We can have a court order remove the corrupt disgraced DC govt. from this miserable fraud and put the future of our park, to a vote, and a conservancy formed, a trust from outside the circle of corruption and the "marketplace of influence" charading as a govt. God forbid these hacks become a state govt!