Which you want to do.

I can't be for sure, but I suspect the proliferation of rowhouse pop-ups in Bloomingdale -- zoned R-4 -- is a part of the motivation by this DC Office of Planning proposal.

Rowhouse building height
This proposal addresses the matter-of-right development permitted -- by reducing rowhouse height from 40 feet to 35 feet.  Anything over 35 feet would require BZA special permission.
Number of dwelling units in R-4
This proposal would also limit the number of dwelling units in R-4 to just two units, regardless of lot size.  There are a few blocks in Bloomingdale, like the unit blocks of Adams, Bryant and Channing St NW, whose lot sizes exceed 2700 square feet, which currently are permitted to have * three * dwelling units (900 sq feet per dwelling unit for R-4 under current zoning.)   An example of a recent development of a greater-than-2700-square-foot lot is 74 Adams Street NW, which was developed into three dwelling units as a matter-of-right.
Building to the maximum lot occupancy of 60% currently permitted in R-4
On some Bloomingdale blocks, the existing rowhouses only occupy 40% of the lot.  Developers are coming in and extending the rears to 60% lot occupancy -- the maximum currently allowed.  Examples at 19 Adams Street NW and 2134 Flagler Place NW.  The DC Office of Planning proposal discussed in the Washington Post article below does not address building to the maximum lot occupancy.

Some Bloomingdale residents don't mind having two-story rowhouses get third-story additions.  And some neighbors are fine with large lots -- exceeding 2700 square feet -- being converted into three dwelling units.  And some neighbors don't mind having the existing rears built out to the 60% lot occupancy.
Not surprisingly, other neighbors are not pleased with two- to three-story pop-ups, especially on blocks where the existing set of rowhouses are just two stories.  Other neighbors are not pleased to see three dwelling unit lots getting developed, even though they are permitted in R-4 under current zoning regulations.  And other neighbors do not like having the rears of rowhouses extended out beyond the line of all of the other rowhouse rears on a given block.
So, for some neighbors, this proposal addresses issues that are simply not issues.
Other neighbors, however, might perceive this DC Office of Planning proposal, as a godsend.
Neighborhood historic districts / conservation districts
Note that neighborhood historic designation would address the third-story addition pop-up, but not the three dwelling units on large lots issue.  And another idea being mulled by the DC Office of Planning -- conservation districts, sometimes referred to as "historic district-lite" -- would also only address third-story addition pop-ups, but not the three-plus dwelling units on large R-4 lots.  And not rear build-outs to 60% lot occupancy, unless the property happens to be along an alley, like 74 Adams Street NW -- and then only the exterior building materials, etc., and not the extension to the 60% lot occupancy line itself.
And it should be noted that the DC Office of Planning zoning regulations review (ZRR) -- also known as the zoning rewrite -- does not address these issues.
The topic of pop-ups has been popular at the Bloomingdale Neighborhood blog.  Here is but one sample.
Here is a post on Bloomingdale rear build-outs -- see the pics.
Let the discussion begin on this DC Office of Planning proposal! 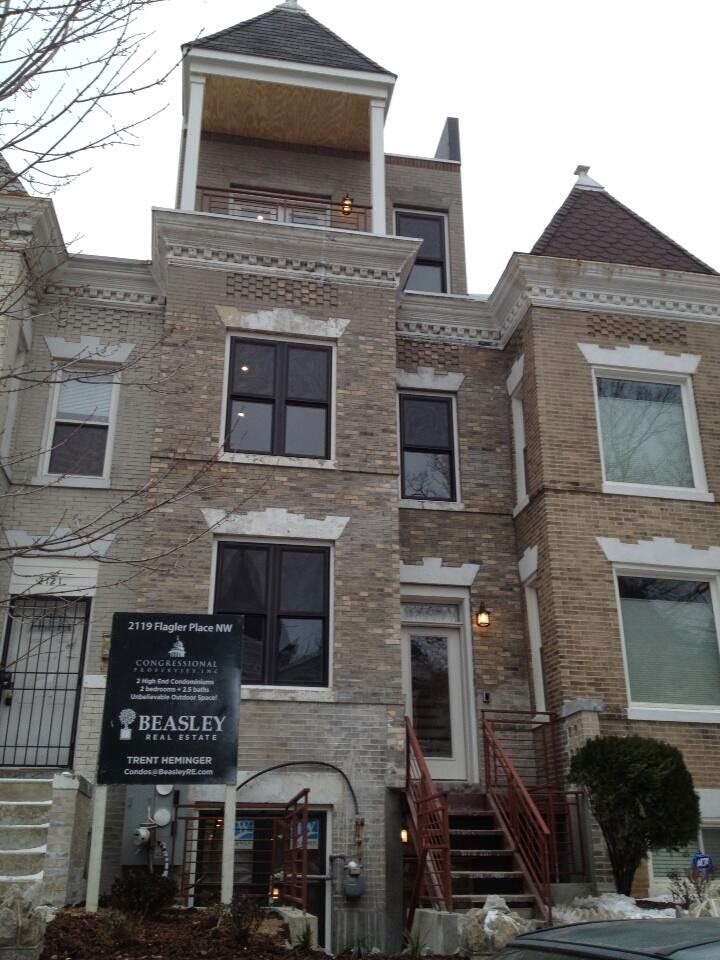 Here is a sample Bloomingdale pop-up -- at 2119 Flagler Place NW.

Sky is not the limit on height of D.C. rowhouse renovations


The pop-up might get a smack-down.
The District’s planning office last week released proposals that, if approved, could curb the city’s rising number of “pop-ups” — renovated rowhouses that get extended upward by one story or more and often stick out on their streets like castle towers in small villages.
Under the new proposals, developers would be able to raise the height of family rowhouses in one of the city’s predominant residential areas — the R-4 zone — only to a maximum of 35 feet and would need special permission from the Board of Zoning Adjustment to reach today’s by-right cap of 40 feet.
The planning office also wants to bar developers from converting family rowhouses in the R-4 zone into buildings with three or more units.
...
D.C. officials are proposing new regulations that would limit developers' ability to build "pop-ups" in some residential areas of D.C. Read the proposal.
...

Jennifer Steingasser, the office’s deputy director, said the city has many other zones where developers can convert residences into three-plus unit condo buildings. But it’s in the R-4 zone, where “we’re hearing about inappropriate expansion,” she said. “There are many zones that do accommodate small apartment zones. That’s where we want that development.”
As a concession, the new proposals would allow developers in the R-4 zone to convert non-residences — such as schools or churches — into condo buildings with three or more units, but only after obtaining a special exception from the Board of Zoning Adjustment, a time-consuming process that can force builders into hefty legal fees.
...

Steingasser, the planning office’s deputy director, said that on July 17, the Zoning Commission plans to consider whether to have a public hearing on the proposals. If approved by the Zoning Commission, the new proposals could go into effect no sooner than late 2014 or early 2015, she said.
Posted by Scott Roberts of Bloomingdale at 7:36 PM

Alot of damage can be done in six months or a year. Esp. if developers fast track new popups to get in under the deadline.