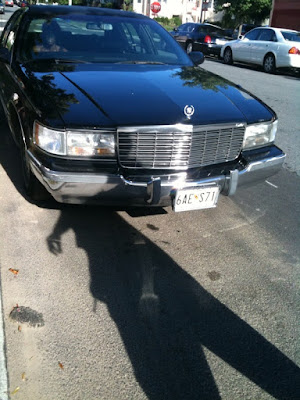 From a Bloomingdale resident:

Almost every day I see people going to the bathroom (#1) along Bloomingdale Court and surrounding alley areas. Today I confronted a man, about 6'5", 250 lbs, black, glasses, who had pulled his car over to take a wizz on my neighbor's back fence.

He seemed to think there was nothing wrong with his actions, and tried to grab my phone when I took this picture of his car's license plate. As he drove away I flagged down a police car and they went speeding after him (go MPD!), but it's likely that he got away.

If anyone sees this car in Bloomingdale, I suggest they call 911 and report him, and I hope others are taking actions against this disgusting behavior and defending our neighborhood.

Posted by Scott Roberts of Bloomingdale at 8:40 PM

I was threatened a couple months ago that some guy would "fuck me up" and that I "should know better than to move to a black neighborhood" when I told the guy to not pee on my fence. I was sitting on the back porch at the time, though he didn't seem to realize I was there until I told him to stop. This was in the alley on the west side of the 2100 block of Flagler Place, in the middle of the afternoon, and the police weren't nearly so helpful when I called them.

Is that a MD license plate?

I caught a lady in the act behind my house this spring - she had driven her car (white Cadillac, DC plates) into the alley, left her kid in it, and popped a squat beside the neighbor's fence. I yelled at her, she responded with a sarcastic "Ok".

I called 311 and 911, with the license plate no. The best they could do, the operator told me, was to send an MPD officer over, which didn't seem necessary since she was long gone by then.

Alley poopers frequently leave, shall we say, evidence, by my back fence, despite my attempts at putting thorny rose bush branches in the way. If you see anybody with little blood spots on their back, chances are they just did a number two in my back yard...