Brookland resident David Wolkoff: "Give yourself a park for Christmas! McMillan Park!"

Tour the magical spaces of McMillan Park, http://vimeo.com/111638481
and please consider donating to our legal fund to stop the city’s plans
to demolish and sell (giveaway to VMP.com)our park:https://www.crowdrise.com/savemcmillanpark
CITIZENS,
please consider contributing to the fundraiser for our community fight for McMillan Park(those strange silos on N. Capitol), give yourself a 25 acre registered historic site/park for Christmas!!!!!!, you already own it!
But today Wednesday Dec. 16 your elected representatives are voting in the last 2014 City Council meeting, to give away (surplus and dispose), hush, hush, the last 25 acre publicly owned parkland and green space in Ward 5, in all of DC, to conglomerate national developers , Trammel Crow, EYA  and Jair Lynch.

Correction, once publicly owned, and completely wasted by same representatives for 28 years, at a cost of somewhere in the range of $25 million and "theft of enjoyment" from our community that cannot be calculated!

Your representatives,,
after years of concerted avoidance, purposeful deafness, continual admissions of "not being informed", blocking out 7000 petitions, IGNORING, 100's of community testimony to City Council hearings, HPRB, Zoning Commission, Mayor's Agent, , all curiously under the Office of Planning and controlled completely by the Mayor (fraudulently elected), our City Council held a single hearing Nov. 12, AGAIN to ignore and block out dozens more testimony in opposition. All forms of public need and alternative uses for our land, completely ignored.

A City Council joint hearing shared by Bowser Chair of  Economic Development and McDuffie Chair of Government Operations, to get it over with faster, which no members attended other than Chair McDuffie( who exhibited limited knowledge of the issue). They voted in the Committee of the Whole Dec. 2, to move the issue to final vote. That vote took 30 seconds, and was unanimous, with not a single question or statement, from people who talk incessantly. Even Mary Cheh and Chairman Mendelson who pick apart an issue until you are ready to scream, had no questions at all. An extremely controversial  city development, fought for 27 years by the community,  worth $2 billion, many more $billions to the private corporations, not a question, 30 seconds to vote approval of the giveaway?????

A corporate fleecing, of a 200 plus million dollar property for $30 million, and unlimited obligation that DC will cover for unknown land mitigation and site preparation worth over $70 million. The National Harbor of N. Capitol, for years of construction, "The Monstrosity on Michigan Ave",,right on top of a catastrophic infrastructure failure and multi year mitigation tunnel project for sewage and storm water runoff FLOODING, 5 miles long and 28 feet in diameter, a subway more or less. Take out the 25 acre parkland, and add tens of thousands of toilets, appliances, commercial,700 condos, and massive medical office towers, only to be outdone by twice as large Armed Forces Retirement Home development across the street, and 40 more in Ward 5, damaging to the public health as well as infrastructure.

Question___, what has the Mayor done, or any City Council member, Orange, McDuffie, and Grosso being our neighbors and Kenyan and Bowser with oversight, to inform you of this mega-urbanization and humongous sweet land deal to Vision(less) McMillan Partners.com

Jefferson and Madison handed down to us a democracy whose  most important function of representatives was to inform the public of what the government was doing, legislate, and keep oversight.

But shockingly, the Deputy Mayor for Planning and Economic Development, appointed by Gray, has hired a PR firm to "neutralize opposition", influence the media with distorted talking points, and "create the impression of community support for the development", and more divisive and subverting tactics.
The Jamie Fontaine Company was paid $28,000 in DC tax dollars. Then DMPED's M.Jeffrey Miller denied in City Council testimony to Miss Bowser(who did not a thing)DENIED! that public funds paid for the PR firm.
Trammel crow hired the Carmen Group, top gun lobbyists, and paid over $200,000 in two years for 5 appointments, Bowser, alexander, Barry, Cheh and Grosso. Grosso, who has suddenly become a giant booster of this anti-environmental monstrous construction, and proponent of sustainable agriculture and open legislative process,LOL.  This was with our money as well, VMP  have been DC paid consultants, so you paid $494.00, each for two phone calls or faxes by Carmen Group to your representatives, look it up at BEGA.
Merry Christmas EYA, Trammel Crow and Jair Lynch,
IF YOU ONLY DESERVED IT!!, I appreciate your testimony to this generous City Council, thanking all involved, supporters and opponents, and how much you respect us., especially the subversion campaign.
McMillan Coalition for Sustainable Agriculture
amglassart@yahoo.com
Daniel Goldon Wolkoff 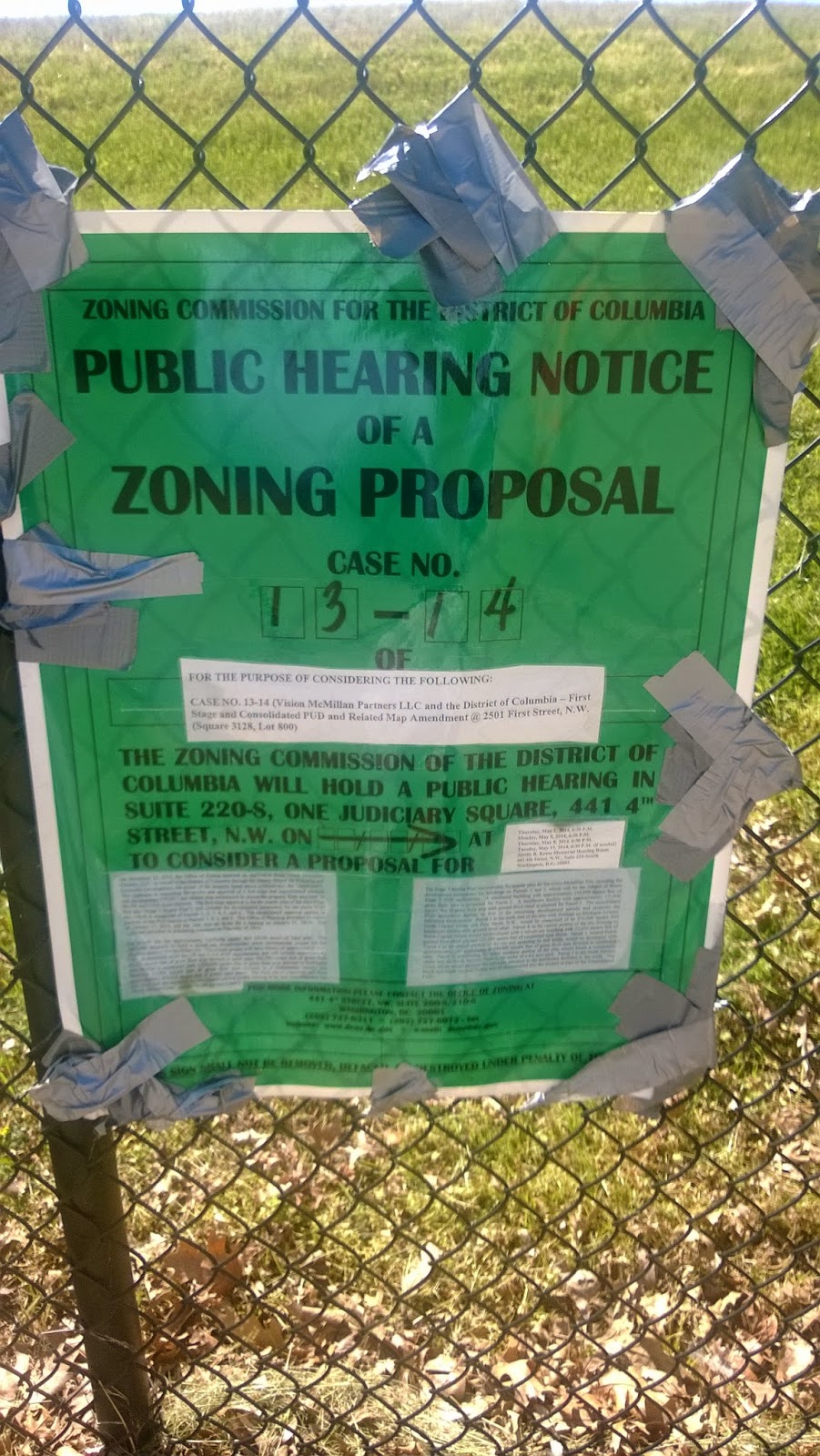 Posted by Scott Roberts of Bloomingdale at 7:48 AM

If no one else will comment, I'll comment! Fist the inspired author is Daniel Wolkoff, not David.
The "talking points" that Fontaine and VMP have loaded on our community are such bunk. crap!
http://youtu.be/uXkOgHV7Lhw
Parks are development, and they produce revenue. How much annual revenue does
Wolf Trap produce for National Park Service, and The Wolf Trap Foundation? We need a Wolf Trap concert stage at McMillan,, with awesome architecture(unlike the hideous designs of VMP). We need skating rinks, that convert to roller skating in the summer, a Glen Echo historic restoration with 365 days a year of classes, performance, music, art, dance. We desperately need a place to train young people and the under-employed in building trades, as they restore our park/historic site.This Civilian Conservation Corp will spin-off into a rehab and renovate service for senior home owners, to help them keep insulate and upgrade the condition of their homes. We need outdoor activity, to keep us healthy, not medical offices, we want to keep you out of the doctors office, not ruin our park with hideous offices.
So the talking point is that DC needs revenue,, sure like the $25 million our government officials have wasted on fencing us out for 27 years and Spectrum Maintenance, flushing $250,000 a year down the toilet on some fraudulent contract for maintenance.
Google Central Park,, remember the "Great Meadow", Delacorte Theatre, Wolman Ice Skating rink with summer concerts? Something wonderful about large open spaces in the city!
In NY, revenue from 21 hot dog vendors in Central Park will total $60 million in 30 years, no bonds, no demolition, no construction, no paving, no 3000 parking spaces, just grass, and trees.
One hot dog vendor in NY's Central Park, operates a pushcart at the entrance to the Central Park zoo, and pays $289,000 in fees to the city of NY. The top 20 vendors pay over $100,000 a year to NYC to operate their pushcarts and sell food in parks. That is $2.3 million a year from 21 food cart vendors, but DMPED, Mayor (still un-indicted, but offered a plea deal!) Gray, Miss Bowser, Kenyan McDuffie and the Visionless McMillan Partners "know better". Only in DC, parks are barren empty useless burdens on the city govt., everywhere else parks are "development".
http://youtu.be/ILzWmw53Wwo
Anyone know the annual revenue from the Glen Echo Consortium? How much business is done at the various concessions and bistro in Bryant Park in NY?
McMillan wasn't a park, according to the "talking points" of a DMPED funded disinformation campaign from Baltimore PR firm Jamie Fontaine. Our tax dollars used to "neutralize opposition", and this is legal and from a city with Ethics reform by Muriel Bowser!
The lobbyists for Trammel Crow, Carmen Group were paid something like $250,000 for lobbying 5 City Council members, over two years, with our tax dollars. If they use the telephone or send a fax, we are charged a $454.00 clerical fee!!! Ever wonder what your taxes are being used for?