WBJ: "McMillan a go? The search is on for a general contractor"

McMillan a go? The search is on for a general contractor

The $720 million overhaul of the historic McMillan Sand Filtration Plant is moving forward.

Vision McMillan Partners, the master developer for the controversial 25-acre project, on Monday released a request for proposals for a design-build contractor to prepare the site for vertical construction. VMP is a partnership of Trammell Crow Co., Jair Lynch Real Estate Partners and EYA.

The District, as McMillan’s owner, has set aside $70 million for horizontal construction. The city’s 2016 budget requires that revenue from the sale of each pad site, roughly $27 million in total, be reinvested in the public portions of the project.

The general contractor will be chosen through a two-step process. A statement of qualification is due by April 1. A shortlist of firms will be asked to submit proposals due by May 5. VMP expects to issue a notice to proceed by Sept. 1, with the hope of breaking ground on the $720 million project before the end of the year.
... 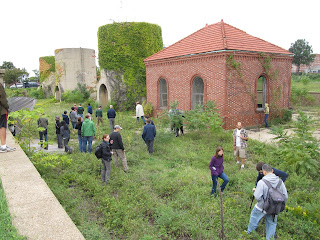 Posted by Scott Roberts of Bloomingdale at 4:48 PM


The issue is the theft from the people of District of Columbia, and the Nation, of a significant work of landscape architecture and industrial design, stolen by its own Mayor and City Council and subordinate agencies who have failed to protect the people of Washington, and violated the law. When the Deputy Mayor for Planning and Economic Development entered into a partnership with well connected development conglomerate (www.envisonmcmillan.com), the DC government abrogated its role as regulator and evaluator, and became one of working in the interest of the developer and against the interests of the people.

The collusion and unconstitutional tactics are exposed in this City Council testimony
by Daniel Wolkoff and long time McMillan activist Mary Pat Rowan:

http://youtu.be/uXkOgHV7Lhw
VMP and DMPED hired Jamie Fontaine ("astroturf PR firm) to violate our first amendment rights to"petition our got. for redress of grievances".
These officials are committing theft, of the 25 acre historic protected work of turn-of-the-century master designers, brought to Washington by Senator McMillan, an important historic and cultural site, a critical public amenity, and a potentially lifesaving backup system for clean water.
Our chemically based clean water system is endangered from numerous threats, including lead contamination and by ground water movement of WW1 nerve gas American University laboratory waste dumps on campus and in Spring Valley, adjacent to the Dale Carlia Reservoir. Welcome to the District of Corruption! Fight for your public land!


When the VMP/DMPED plan "The Monstrosity on Michigan Avenue", is defeated, we can become founders and create a conservancy, of our own much needed Central Park, including numerous community building adaptive re-use "parks are development for everyone".
The 20 acres underground are perfect for sustainable urban agriculture, providing food to local restaurants and ending "food desserts", community owned and operated, a DC Wolf Trap concert stage, and Glen Echo arts/performance and education campus for families and DC youth.
Please see this fascinating video:
http://youtu.be/ILzWmw53Wwo
Join us to fight the corruption and mass transfer of public wealth to VMP, sectioning up our National Registered Historic Park, like a Thanksgiving turkey. Fight massive corruption!

McMillan is far from historic nor was it ever a park by today's standards. The tree huggers have attempted for 30 years to stop this development by terror and fear tactics. Finally the council has acted to get a return on the investment DC Taxpayers who paid over $9 million dollars to develop this land. What these wacko jacko's don't get is the site was bought to develop and that ship sailed 30 years ago. Finally Ward 5 will get a great development that isn't dense like some of the FOM'ers are. It's ideal for the land and area. Not one of these folks complained about the hospital and it's expansion and all the other development there! So thankfully our DC Council has moved to finally create housing, jobs and services for an area that has been underserved since the 1940's. AMEN! Build Baby Build!

Daniel you are wrong on so many levels.
1. it was never a park and what the normal sane person would call a park!
2. It's only historical cause the tree huggers you love tried to use this as a way to stop the development.
3. Jamie Fontaine tried to help the folks you and the FOM'ers harassed and spit on using terror and fear tactics. She was only trying to get those who supported the project to be able to have a voice without being terrorized!
4. Cultural by what standard is this cultural?
5. This landscape was done by Olmsted's sons who in comparison to the father were hacks.
6. The chemicals you speak of had to be used only two years after the slow filtration was build...why because it didn't work like Senator Mcmillan and his bright engineers thought it would!

So welcome to the world we live in that we have to deal with wack jobs as yourself who fail to see the truth. Who live under the bubble of lies and misinformation!

Well it will never be defeated as yo0u and your clan have lost out over and over again. The DC taxpayers want this development and they want a return on their 30 year old $9million investment and they want jobs, housing and services!
Furthermore, the underground cannot be re used as it's unsafe because it's un-reinforced concrete structure. But again you want to use the space as farm land that would make it the most expensive farmland in the world. Again wacko-jacko thinking! And you expect it to be a stage for concerts on top of it unitl the whole thing caves in and DC is sued for millions. Well hell no. It will be built and you will all go there and shop and enjoy the REAL park that is being built and the community center and some of you will even find jobs at the site. So keep spinning your rhetoric and lies only to have them debunked and laughed at. Build Baby build!

These folks are clearly dellusional. This long overdue development even.jas.the potential for taking many drivers off the roads! When we finally have.this development the residents surrounding it wont have to drive everytime they need to go shopping. Bloomingdale and Ledroit Park can finally become really pedestrian

Thank you thank.you thank you. Maybe just maybe this place will finally serve.this community the way it should have a long time ago! The tree-huggers are much worse than people realize. They dont really care about the greater good. Blinded by their ideology and hatred.

McPark Commish, and please describe the "spit in face" incident. Because you know it it is not acceptable to make up lies, and spread false rumors. Tanks a lot!