McMillan: Motion for Rehearing filed on 07-17-2019 regarding the topics of traffic and the environment

The attached Motion for Rehearing was filed Wednesday night . . . by DC for Reasonable Development, convener of the Save McMillan Action Coalition (SMAC.DC@gmail.com) http://www.savemcmillan.org

--- > Attached is DC4RD's Motion for Rehearing on the terrible zoning decision by the DC Court of Appeals.  It hammers on just two of the acute issues. Thank you Heather Benno, Esquire.

Our request for rehearing is in response to the terrible decision brought down by the DC Court of Appeals just before Independence Day (I wish we can be free from corporate domination of our city, city officials, and our land).  See decision here >> https://www.dccourts.gov/sites/default/files/2019-07/18-AA-698%3B%2018-AA-706.pdf

Can you imagine . . . 21,000+ new vehicular trips a day to and from the shiny new McMillan Town Center (as projected by the developer's own expert), Yet . . .  not one mention of this dramatic increase in congestion as a pure number in any of the agency reports or in the Zoning Commission's deliberation.   What will those who already have asthma now in the area do ? ? What about the rampant gentrification this will bring on ? ?

What kind of Twilight Zoning episode are we in? http://www.twilightzoning.org/wrong/ Don't answer that.

Racine's attorneys are working double time to shield the Mayor's runaway growth machine (its as if they know the world is coming to an end or something and anything goes?!?).   Recently in another zoning case, he argues that Project Impacts no longer matter and shouldn't be considered during zoning reviews.  #wow

We fight on for much better planning in the city that actually considers existing residents before serving developer profits.  Will we get there?  Only if we continue to dissent and keep rising to meet the greed and push back!

PS: The above zoning case on McMillan and the decision rendered is separate and aside from the seven Pro se petitioners (McMillan Seven) who are still in Court fighting the ridiculous Mayor's Agent on Historic Preservation decision.  See this link >> https://efile.dcappeals.gov/public/caseView.do?csIID=62000

In this appeal, we see the Mayor's Agent actually went out of his way to say the federally-assigned covenants on the McMillan Deed and land "don't matter and that he didn't look at them."  Imagine . . . for a moment . . . our premier local historic preservation official could care less about historic preservation covenants on a nationally registered historic landmark.  Next week, a McDonald's will be opening inside the Basilica and a Dick's Sporting Goods inside the Washington Monument. Meet your District of Columbia Mayor's Agent >> https://www.law.georgetown.edu/faculty/j-peter-byrne/ 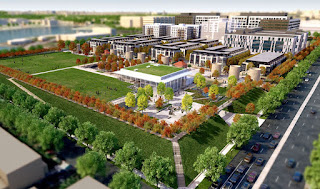 Posted by Scott Roberts of Bloomingdale at 8:06 AM

You lost me at Chris Otten. He is an opportunistic con man. The phony anti-housing NIMBY groups do not speak for the community. Just my two cents as a local resident.

Stop it already. Let this fenced area get some development. Traffic sucks, sure. But seeing this area remained depressed sucks even more. Development brings jobs, improves SECURITY and housing will actually increase. It's called change and evolution. Delaying it for the sake of NIMBYs is just counter-productive to the city.

A more useful group would be "DC for Reasonable Emails". They would fight to stop all incoherent, rambling emails. Think of all the time we would save Mr. Otten and Mr. Wolkoff.

Ughhhhhhh.....these people have far too much time on their hands. Bet the rehearing motion was written in crayon.

The email maybe rambling oh, but there is already too much traffic. That is a valid point.

This guy sounds unhinged. At what point does the city stop allowing projects to be stalled by a group that clearly doesn’t represent the majority?

As long as the majority stays silent these obsessed anti-development groups prevail simply by keeping this tied up in court. It's time for the city council and the Mayor to do their job and put a stop to this exploitation of the courts. This is truly corrupt. It's been in the courts and they lost. NO MORE DO-OVERS!!