You can see on the map that the closest locations to Bloomingdale are down in NoMa and over at 1250 U Street NW.

by David Alpert   •   September 18, 2014
DDOT has released a list of locations where you can find a temporary parklet for tomorrow's Park(ing) Day. 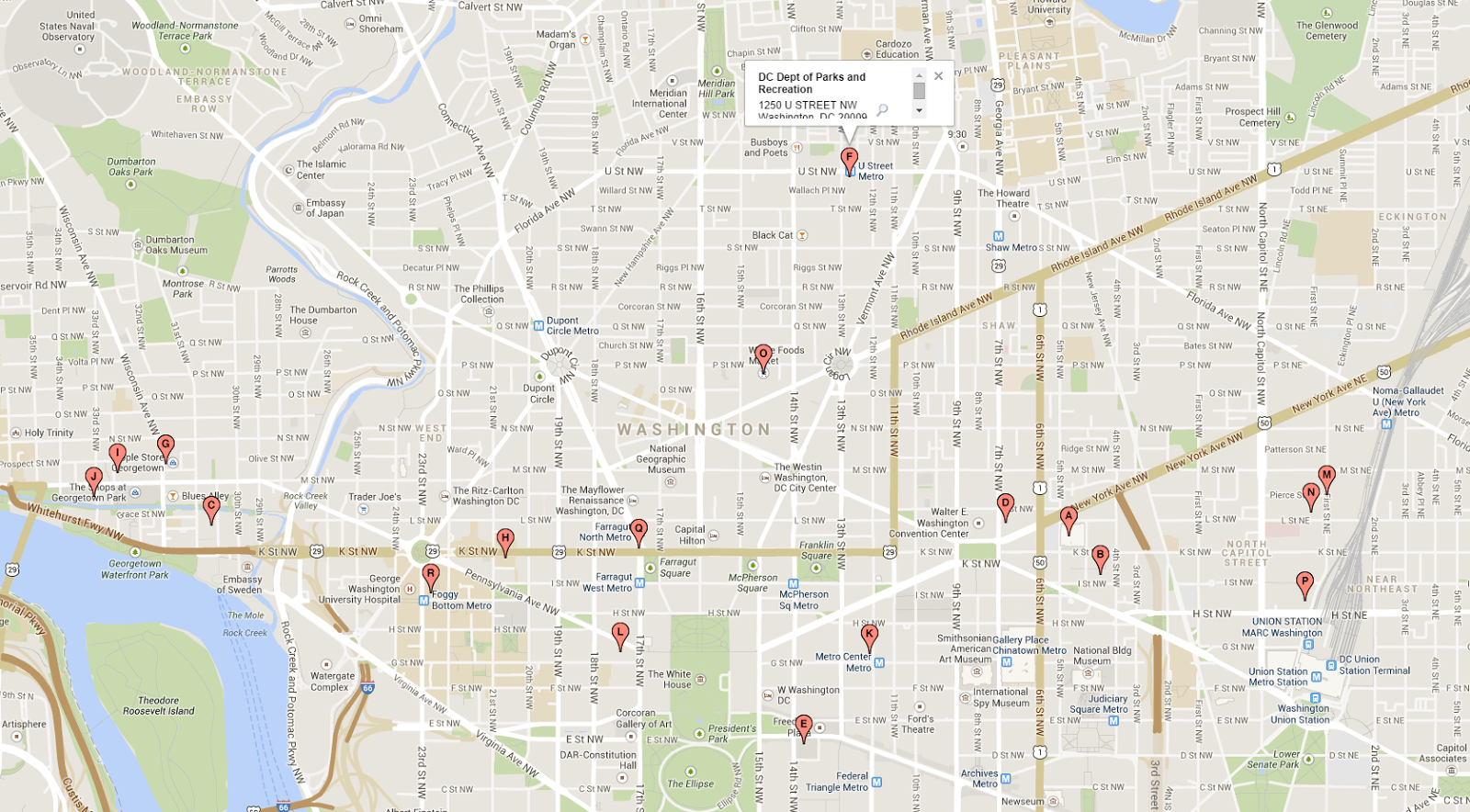 Four Mini Parks Will Be Created in NoMa Friday

Park(ing) Day is a global event in which metered parking spaces are transformed into temporary public parks. Four organizations are creating mini parks in the NoMa neighborhood to bring NoMa residents, workers and neighbors outside to enjoy the weather:

·       Check out the NoMa BID’s park(ing) space at the corner of First and Pierce Streets, NE for free ice cream for the first 100 people from the Orange Cow starting at 12 PM. Otherwise, bring your lunch out to one of our tables and enjoy the fall weather.
·       Ayers Saint Gross will create a Community Canvas that will bring residents, office workers, and visitors together to create a piece of living art. Participants will be able to paint, draw, and more in front of 1100 First Street, NE.
·       DOtankDC will create a fun park with classic games including checkers, chess, and more on the corner of First and M Streets, NE.
·       Opt 2 Move will create a fitness area where you can get your heart pumping in front of the Harris Teeter at First and M Streets, NE.

All Park(ing) Day parklets will be open from 9 AM to 3 PM on Friday in NoMa. The mission of Park(ing) Day is to call attention to the need for more open, public space in the urban environment. With a capital investment of $50 million from the DC government, NoMa will soon have great new parks and public spaces. Learn more about NoMa parks here.

NoMa’s Park(ing) Day is organized by the NoMa BID and supported by Ayers Saint Gross, DOtankDC, Opt 2 Move, and the Orange Cow. Tweet @NoMaBID and @OrangeCowDC to tell us what your favorite ice cream flavor is.

Park(ing) Day began in 2005 when Rebar, an art and design studio, converted a single metered parking space into a temporary public park in downtown San Francisco. Since 2005, PARK(ing) Day has evolved into a global movement, with artists, organizations and individuals constructing creative temporary public space in urban contexts, such as libraries, gardens, and miniature golf courses.

About NoMa
NoMa is a vibrant, growing neighborhood nestled among Union Station, the U.S. Capitol, Shaw, and the H Street, NE corridor in Washington, D.C. Over the last several years, private developers have invested more than $5 billion in the 35-block area within the NoMa BID boundary, and have plans to develop more than 16 million square feet of additional office, residential, hotel, and retail space. NoMa is home to more than 3,900 new apartments, and more than 40,000 people work in NoMa each day. With unparalleled transportation access via Amtrak, VRE, MARC, two Red Line Metro stops, and vehicular access to Interstate 395, visitors, workers and residents can easily travel throughout the region as well as to New York or anywhere on the East Coast. For more information about NoMa, visit www.nomabid.org and sign up for our bimonthly newsletter.