After years of debate, the Zoning Commission (ZC) has tentatively approved the first stage of a planned unit development (PUD) for the redevelopment of McMillan Sand Filtration Plant. In a 4-0 vote, the commission gave developer Vision McMillan Partners a two-year permission to move forward with the first stage of the PUD on Monday night, though final action won’t be taken until November.
The redevelopment plan for the 25-acre filtration site on the northern edge of Bloomingdale (map) includes a mix of townhouses and multi-family residential, office space, park space, a community center and retail, including a grocery store. The development team of Vision McMillan Partners (VMP) is made up of Jair Lynch, EYA, Trammell Crow, and architect Shalom Baranes.
... 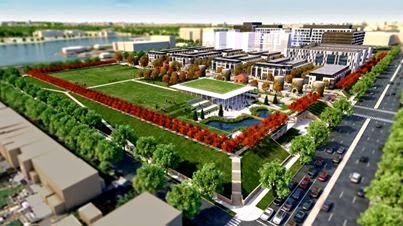 Posted by Scott Roberts of Bloomingdale at 10:10 AM

I'm not sure what's next for McMillian, but it may go Federal since the Feds are saying that the proposed development blocks view sights that are part of the covenants that the District agreed to when they purchased the property.

I'm not sure what's next for McMillian, but it may go Federal. Apparently, the proposed development blocks certain view sights that were a part of the covenant that DC agreed to when we purchased the property.

It is my understanding that the views and viewsheds issue has been resolved with NCPC. This was discussed in the most recent zoning hearing.