Recall the auction at 1952 2nd Street NW in LeDroit Park? 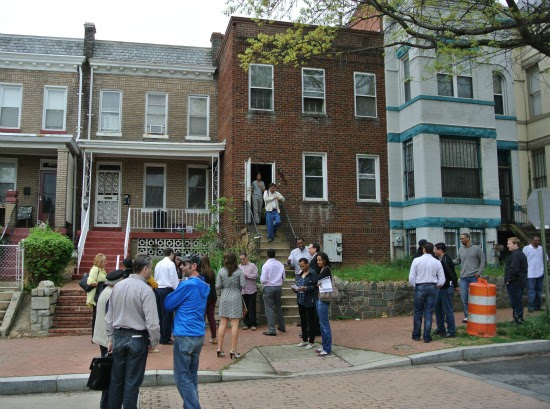 A crowd gathering in front of 1952 2nd Street NW
On Thursday afternoon, a property auction was conducted for a rowhouse shell at 1952 2nd Street NW (map). On its face, the LeDroit Park home would not seem like the type of property that would incite a bidding war. It has plain facade, a completely gutted interior that appears to have fire damage, and the winner would need to embark on a complete rehab.
The bidding started out at $275,000. When all was said and done, it was auctioned for $625,000.
Most of the 50 or so bidders were investors or developers. For Andrew and Sharon Goods, it was their second auction of the day; they had just come from winning a similar auction for a property at 3813 New Hampshire Avenue NW.
However, there were a few bidders that came out who actually wanted to buy, rehab and then live in the property. Fed up with being outbid in more traditional real estate transactions, many hopeful owner-occupants were attracted to the auction by the initial price. They soon realized that they were out of their league.
Within a minute of starting, the bid jumped from $275,000 to $550,000. After that, the bidders became a little more cautious, but the pace remained swift. The bidding finally ended at $625,000, and the slightly stunned looking winner was swept away by the organizers to sign papers. 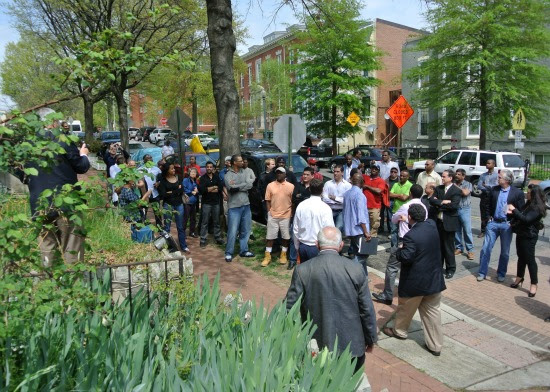 The auction in progress.
The proceedings, led by Alex Cooper Auctioneers, were conducted in a manner full of classic auction devices: a fast talking, “going once, going twice” auctioneer, and subtle hand motions from bidders indicating their interest (this reporter got a little nervous she was in the game after waving to a friend).
Required of all bidders at the auction was a $20,000 deposit in the form of cash, a cashier’s check or a certified check, due at the time of sale. By today, the new owner is required to bring that deposit total up to 10 percent of the purchase price.
What will be done with the property is unclear, but all signs point to the new owner making it a two-four unit property, as is being done with similar properties across the city. The auctioneers suggested adding a third above-grade level or underpinning the cellar to create a lower-level unit. They also suggested creating an addition in the backyard of up to 30 feet.
UrbanTurf will keep an eye on it and let you know what happens.
Posted by Scott Roberts of Bloomingdale at 9:20 AM