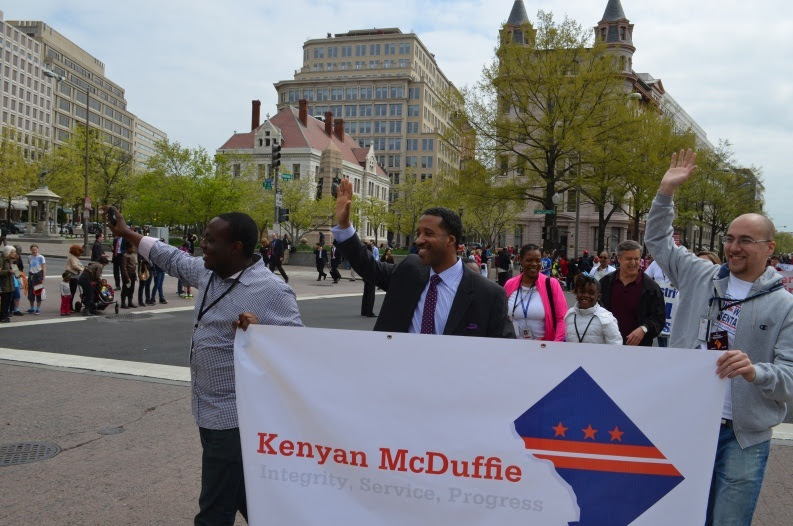 On Tuesday, Councilmember McDuffie joined his colleagues, staff and residents of the District of Columbia to celebrate the 151st Anniversary of DC Emancipation Day.
This year’s Emancipation Day festivities included a parade down Pennsylvania Avenue, NW, led by the Mayor and the Council, which featured the United States Armed Forces, UniverSoul Circus, and the marching bands and pep squads of many local public schools. After the parade, residents attended Emancipation Day and budget autonomy workshops in the John A. Wilson Building. Later that evening, attendees were treated to a gospel concert featuring Kirk Franklin, followed by a fireworks show. 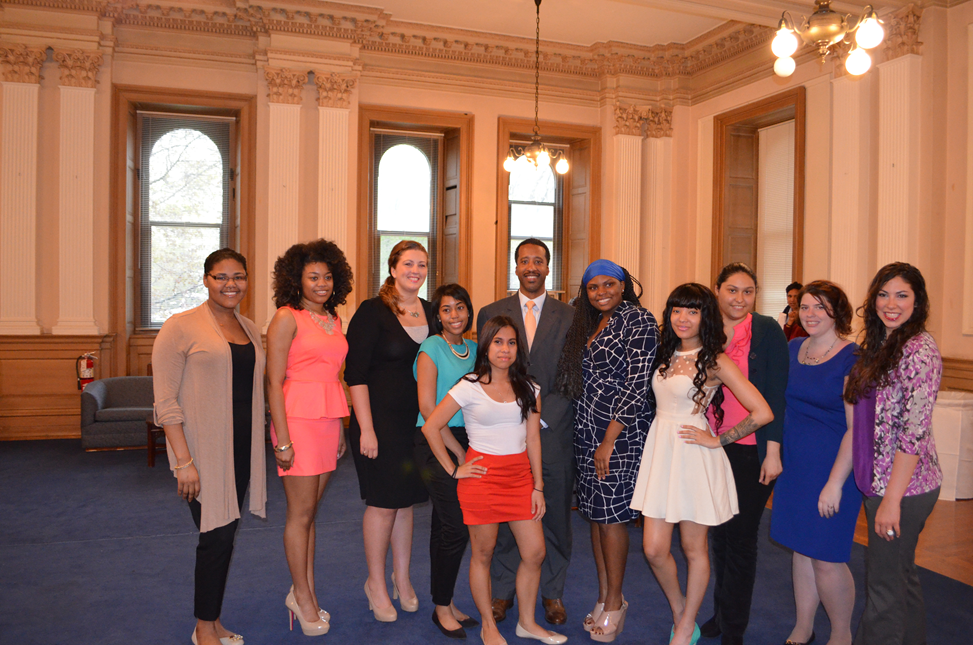 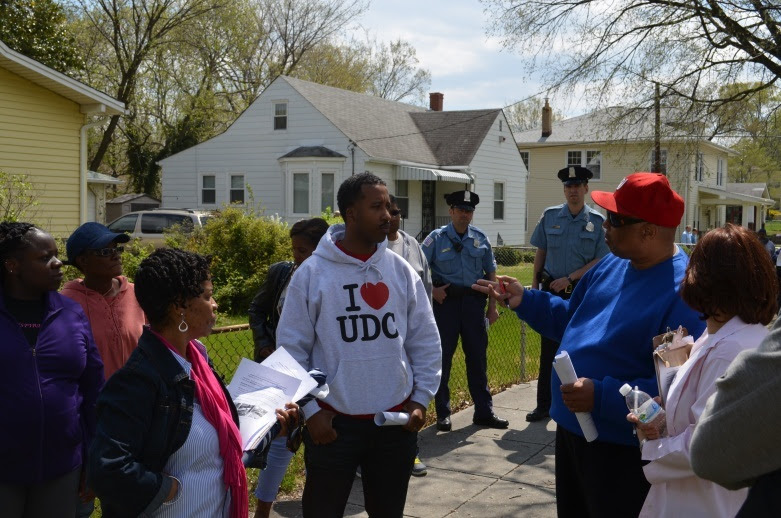 On April 13, Councilmember McDuffie hosted a community walk-through in the Gateway neighborhood with the Gateway Civic Association, Metropolitan Police Department (MPD), the District Department of Transportation (DDOT), the Department of Parks and Recreation (DPR), the Department of General Services (DGS), and other community stakeholders to address quality of life issues and to give residents the opportunity to engage various District agencies. The walk-through provided an opportunity to identify areas where residents wanted to see heightened security, as well as improvements to community facilities. 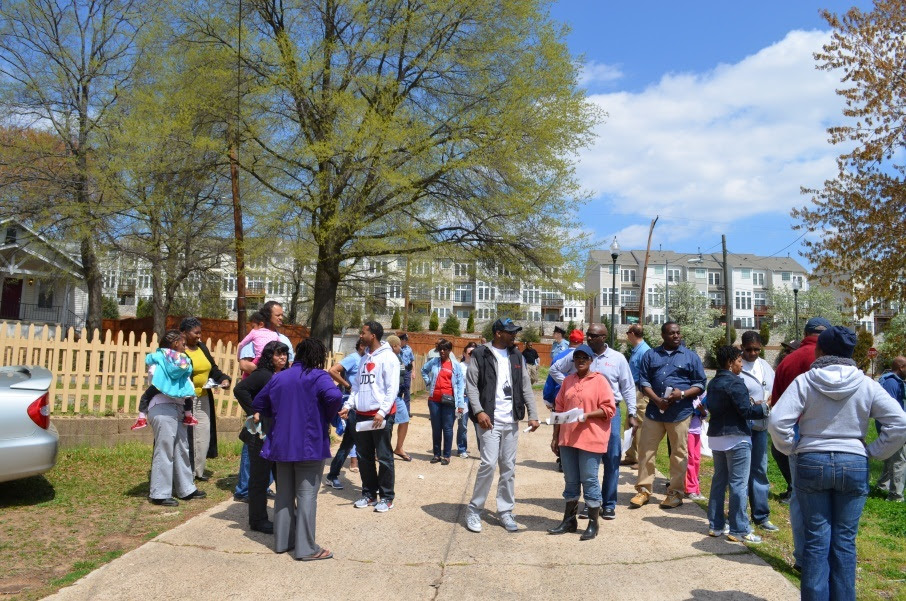 Councilmember McDuffie’s office will conduct a follow up walk-through in the coming weeks to monitor what progress has taken place and address any additional concerns. To see additional pictures from the Gateway community walk-through, click here.
Councilmember McDuffie Conducts Oversight of Inspector General
This week, Councilmember McDuffie, Chair of the Committee on Government Operations, issued a letter to Inspector General Charles Willoughby requesting permission to review confidential files compiled during an investigation of test-cheating allegations in DC Public Schools (DCPS). As a result of the recent release of findings by the Office of the State Superintendent of Education (OSE), investigations by journalists, and the discovery of a confidential memorandum regarding serious allegations of widespread cheating, Councilmember McDuffie issued a letter to the Office of the Inspector General (OIG) outlining his concerns with their investigation around test-cheating in DCPS.
“… I am again expressing concern about the fastidiousness of the OIG’s investigations. As you have rightly stated, District residents rely on your office to help prevent fraud, waste and abuse. While I do not wish to make inflammatory accusations, the discovery of this memorandum creates doubt that your investigation thoroughly and expansively examined the allegations regarding the District of Columbia Comprehensive Assessment System Standardized Exams administered by DCPS,” Councilmember McDuffie states in the letter.
Click here to read the entire letter from Councilmember McDuffie.
Recently, OSSE released a report on Testing Integrity Findings for School Year 2011-2012. The report investigates the integrity of the statewide District of Columbia Comprehensive Assessment System exam, which was administered on April 17-27, 2012, at 243 schools in both District of Columbia Public (DCPS) and Charter Schools.
Councilmember McDuffie issued the following statement on OSSE’s report on Testing Integrity Findings for School Year 2011-2012:
“I am deeply concerned with OSSE’s finding of widespread testing violations in the District’s public and charter school systems. Further, I am disturbed that three Ward 5 schools have been identified in OSSE’s audit, including Langdon Elementary School, where severe testing violations occurred. OSSE informs me that 40 percent of the scores at Langdon Elementary Campus will be invalidated due to test tampering or academic fraud. This news is even more troubling given that Langdon Elementary School is slated to absorb additional students from the imminent closure of Thurgood Marshall Elementary School.”
To read Councilmember McDuffie’s complete statement, click here. 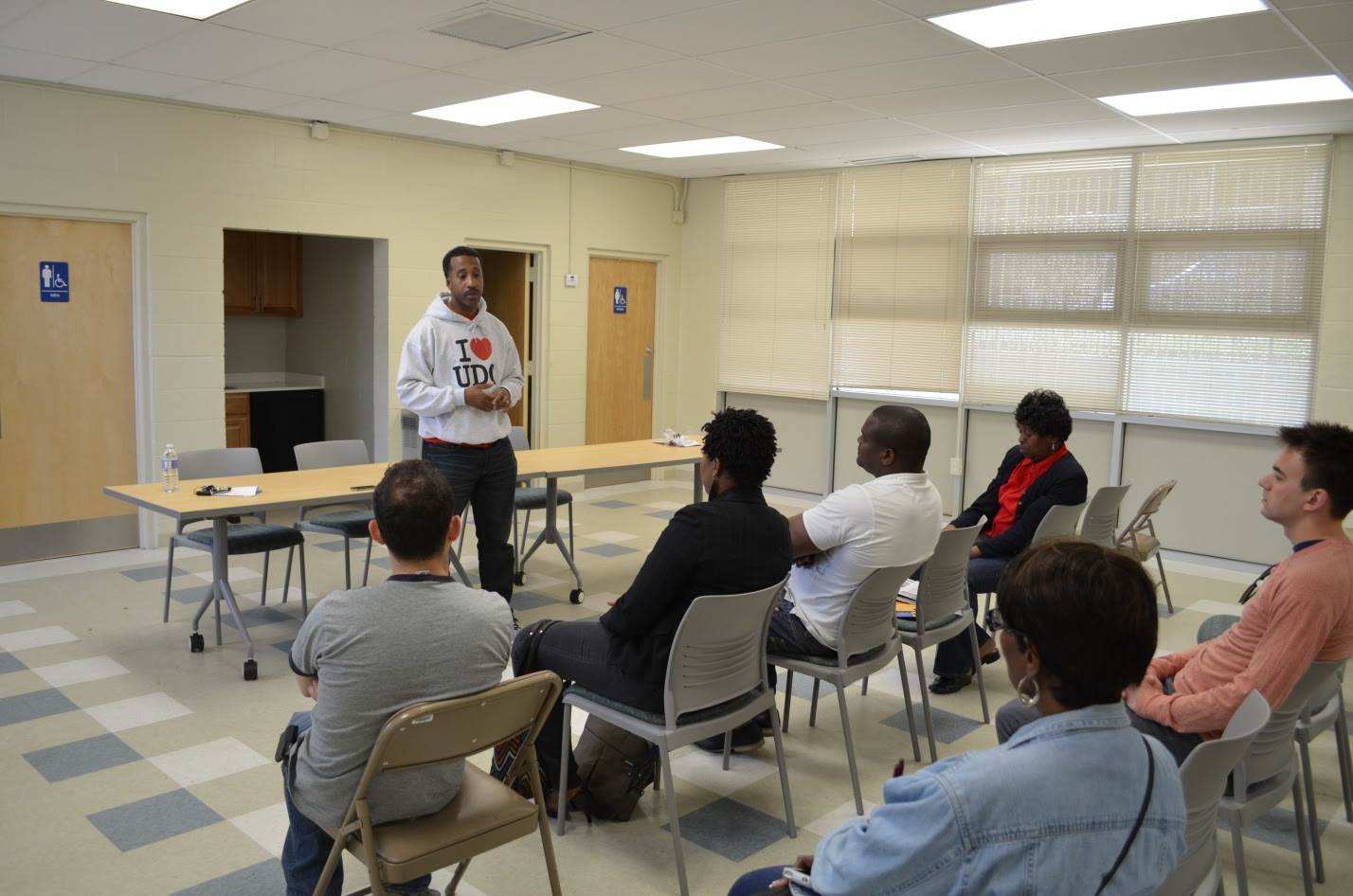 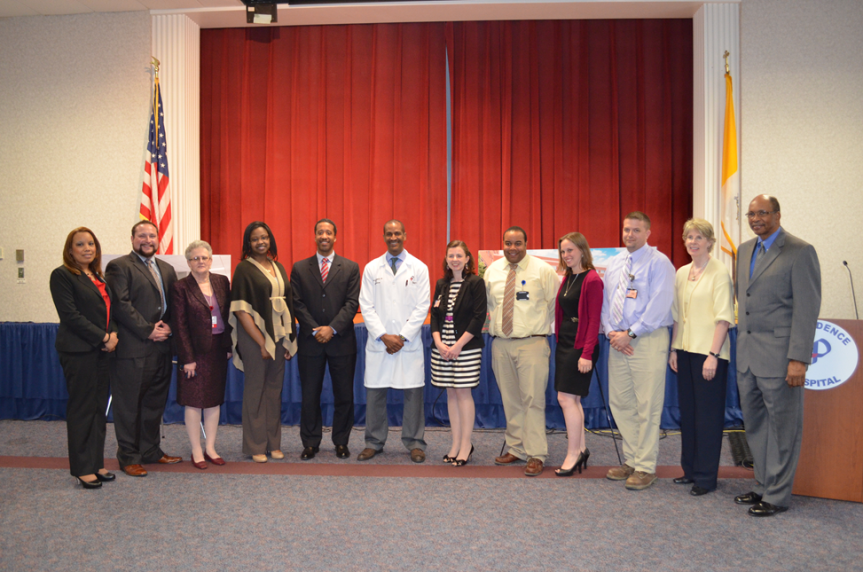 Providence Hospital, located in Ward 5, will be growing and modernizing its Emergency Services Department. This week, Councilmember McDuffie joined members of the hospital’s board and staff to lean his support for the new annex.
Providence Hospital is the longest operating hospital in Washington, DC. The new Emergency Department will incorporate an open floor plan and will grow from 13,000 to 24,000 square feet. To read more about the Providence expansion project, click here.
Councilmember McDuffie Joins Community Organizers to Plant Trees at the Ward 5 September 11 Memorial Grove 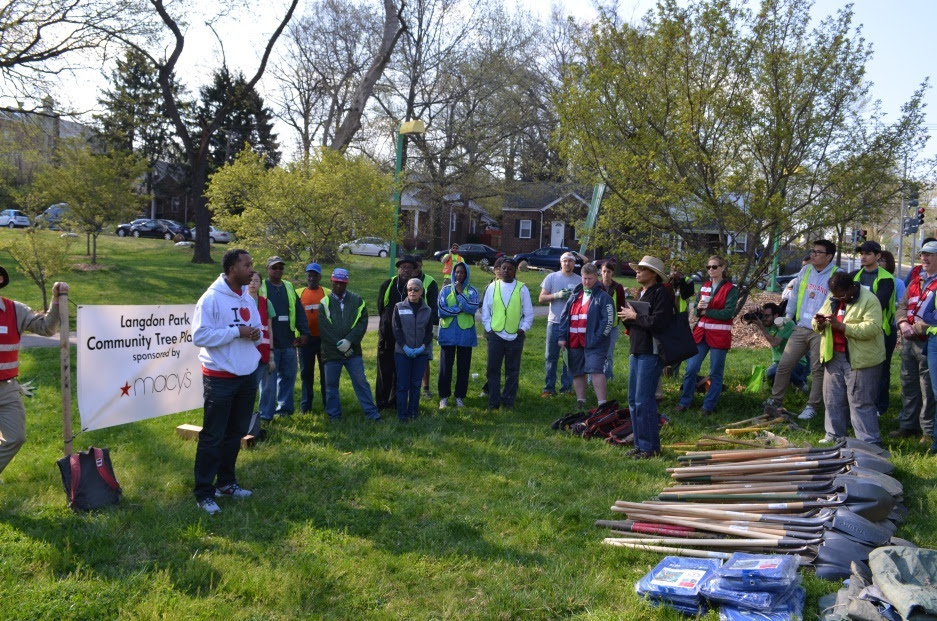 The September 11 Memorial Tree Grove, located in Langdon Park, was originally planted by residents of Ward 5 in honor of three students, three District of Columbia teachers and two staff members from the National Geographic Society who were among the victims of the terrorist attacks on September 11, 2001. On April 13, Councilmember McDuffie joined Casey Trees, Premier Community Development Corporation, the Woodridge Civic Association, the National Horseshoe Pitchers Association, the Geneva Ivey Day School, and members of the community for a Langdon Community Tree Planting event.
The event brought together over 40 participants from the community and various organizations to plant new trees and improve the September 11 Memorial Tree Grove. Participants also planted trees in the horseshoe pit area next to the Memorial Grove. More information about 9/11 Memorial projects in the District can be found athttp://voicesofseptember11.org/dev/memorials.php?state=DC. 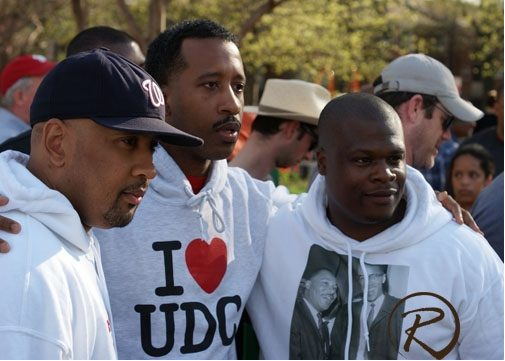 Last week, Councilmember McDuffie joined supporters to march for peace in response to the recent violence in the District. In 2011, Tony Lewis, Jr. and Silas Grant held a March for Peace event at the intersection of North Capitol Street and Florida Ave, NW, the site of the murder of Bill Mitchell, Jr. Organizers held a second march in response to a shooting that recently occurred on North Capitol Street and New York Avenue, NW. Other attendees included Councilmembers David Grosso and Tommy Wells, and Advisory Neighborhood Commissioners Teri Janine Quinn, Mark Mueller, Joyce Robinson-Paul, and Wanda Foster.

Councilmember McDuffie Supports Local Arts Programming
This week, Councilmember McDuffie’s staff met with the DC Advocates for the Arts to discuss their budget needs for FY14. The group has organized DC’s Arts Advocacy Day every year for more than a decade.
"Our community is not only inspired by the arts, our community is employed in the arts, and educated by the arts,” said Councilmember McDuffie. “Ward 5 arts organizations like Dance Place and Art Enables are part of what make me proud to represent my community. The arts contribute to an environment conducive to healthy families and happy neighborhoods. I wholeheartedly support the work of the arts, and at least level funding for the DC Commission on the Arts and Humanities for the coming budget year. I want to thank all of the advocates who are speaking up about this issue. I'm with you in this fight. The arts may be a small part of the DC budget, but they have a big impact."
To learn more about the DC Advocates for the Arts, please visit: www.dcadvocatesforthearts.org.
Announcements:
DC Agencies Will Hold Follow-Up Meeting on Turkey Thicket/Brookland School Middle Project
Please join representatives from DGS, DPR and DCPS for a follow-up community meeting on the upcoming Turkey Thicket/Brookland Middle School projects. Agency representatives will be on hand to provide a project update on the school footprint for the site and continue to engage with residents.
The meeting will be held Saturday, April 20, at the Turkey Thicket Recreation Center, located at 1100 Michigan Avenue, NE, beginning at 10:00 a.m.
DPR Announces Registration for the 30th Annual DC Senior Games
DPR will conduct open registration for the 30th Annual DC Senior Games. Registration continues through May 1. The DC Senior Games are scheduled to take place May 6 – May 13 at various locations throughout the District of Columbia. Registration for the DC Senior Games can be completed online by visiting the 2013 Senior Games web page or seniors may apply in person at one of DPR's recreation centers.
For more information, please contact DPR Customer Service at 202-673-7647 or visit the DPR website:http://dpr.dc.gov/DC/DPR.
Open House for the McMillan Sand Filtration Site
Come see the building designs for the park, community center, grocery store, apartments, townhouses and offices from the Vision McMillan Developers and project architects. The opening house will be on Saturday, April 27, from 12:00 p.m. – 2:00 p.m. at the St. George’s Episcopal Church, located at 160 U Street, NW.
PUBLIC NOTICE: BOE Announces the Relocation of Precinct No. 70 and No. 77 for the April 23 Special Election
Please be advised that Precinct No. 70 will be relocated from Burroughs Elementary School, located at 1820 Monroe Street, NE, to the Perry Street Prep PCS at Taft, located at 1800 Perry Street, NE. The relocation is necessary because Burroughs Elementary School is under construction.
Additionally, Precinct No. 77 will be relocated from Delta Towers Apartment, located at 1400 Florida Avenue, NE to the Joseph H. Cole Recreation Center, located at 1299 Neal Street, NE. This relocation was necessary because BOE has received numerous complaints about the inadequate space and long lines at Delta Towers.
BOE will notify all registered voters in the precincts of these changes. One Judiciary Square is the only Early Vote Center open for this Election. It is open until Saturday, April 20 from 8:30 a.m. until 7:00 p.m.
If you have any questions, please contact BOE at (202) 727-5704 or visit http://dcboee.us