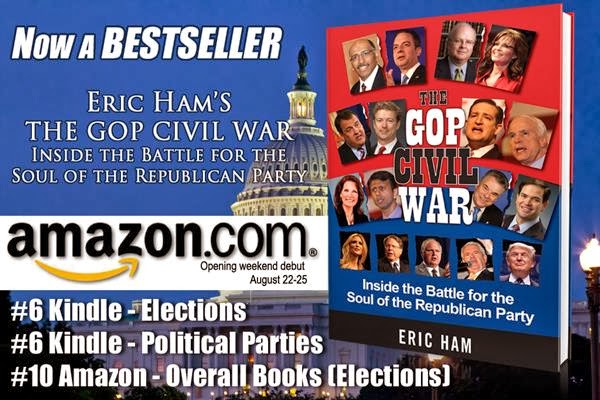 Debt-ceiling, budget standoff with Congress
Eric Ham’s THE GOP CIVIL WAR debuts in Top 10
On three Amazon bestseller lists
The Obama White House has invoked themes from the nation’s newest bestseller (The GOP CIVIL WAR: Inside the Battle for the Soul of the Republican Party) in the ongoing internal fight in the Republican Party, and how it may cause a government shutdown and default.
Speaking to reporters at the daily press briefing Wednesday, White House Press Secretary Jay Carney said: “Everyone in your business has accurately reported as essentially an all-out civil war within the Republican Party, where a faction of the party is at odds with the leadership ... which could lead us to a shutdown or even worse to a default.”
Carney’s recognition of the ongoing GOP Civil War acknowledges what many readers of the new book already know. Published by SNAG Publishing Group and released as a Kindle edition by Amazon.com, The GOP CIVIL WAR debuted at #6 in Amazon’s Kindle Store for elections books; #6 in political parties; and #10 in overall elections books (e-books, hardcover, paperback) during its opening-weekend release August 22-25.
The new book is listed as one of Amazon’s “Hot New Releases” and has been hailed by some of the most influential minds in national politics. Ham and the book have been praised by veterans at The Washington Post; CNN; and producers of network Sunday talk shows have called it a “comprehensive look at the GOP’s challenges for what’s certain to be an interesting 2016 Election.”
Ham’s recent appearances on national talk shows have sparked a national conversation about what this budget and debt-ceiling fight may mean for Republicans and Democrats in next year’s congressional elections and the 2016 presidential race.
“This is the best political book out right now, because it cuts through the Washington beltway jargon and is an easy read about what’s really going on in the Republican Party,” said Dr. Rosie, national talk-show host of ‘Express Yourself.’
Since losing the White House in 2012, the GOP has been immersed in endless fisticuffs. Chris Christie vs. Rand Paul; Karl Rove vs. Sarah Palin; John McCain vs. Ted Cruz; Reince Priebus vs. Michael Steele; the Tea Party wing vs. John Boehner and Bob Dole moderates. Many journalists, pundits and politicians have talked about this Civil War, but no one has written in-depth about it—until now.
With Congress and the White House poised for a politically precarious showdown over a government shutdown and defaulting on America’s full faith and credit, not to mention what to do about Syria, the timing is perfect to have a conversation with Eric Ham. To interview him, or have him join your organization for a discussion, contact Blake Feinberg at feinberg@snagenterprises.com or Ken Oglesby at ken@snagenterprises.com.
Ham officially begins his national tour with a stop in Aspen, Colo., this weekend at the International Career Advancement Program (ICAP), which brings together mid-career professionals with senior officials and policy-makers to discuss major international issues, programs and policies.  In early October, he heads to Detroit for an appearance at the University of Michigan-Dearborn, and will also make several appearances in and from Washington, D.C.
Learn more learn more about the book at www.thegopcivilwar.com. You can follow Ham and the book on Twitter @thegopcivilwar.

SEE SUGGESTED INTERVIEW QUESTIONS BELOW
ABOUT ERIC HAM:
Eric Ham is a political and national-security analyst. He is the author of S.O.S.: A U.S. Strategy of Statebuilding, and he is the chair of the Fragile State Strategy Group in Washington. A U.S. Senate fellow, he was a national security advisor to the Senate Armed Services Subcommittees on Emerging Threats and Capabilities; Strategic Forces; and Readiness and Management Support. Ham also conducted research and analysis for the Senate Foreign Relations Committee. At the Center for Strategic and International Studies he was director of congressional relations. He was staff director for the Joint Experts’ Statement on Iran at the 3d Security Initiative. He currently serves as a senior adviser for Global Political Solutions, a Washington-based leading multi-service business development and government relations firm. A political science graduate of the University of Michigan, he also holds a Master of Public Policy Degree from the University of Chicago. He and his wife reside in Washington, D.C.
ABOUT THE BOOK:
THE GOP CIVIL WAR:
Inside the Battle for the Soul of the Republican Party
By Eric Ham
SNAG PUBLISHING GROUP
August 28, 2013; $3.99 (e-book); 130 pages
www.theGOPcivilwar.com
@thegopcivilwar