the * entire front * of 2119 Flagler Place NW has been removed

Here is an update on 2119 Flagler Place NW, which was recently purchased by a developer and is being converted from a two-story house to a three-story house.

Here is what it looked like before the current renovation commenced: 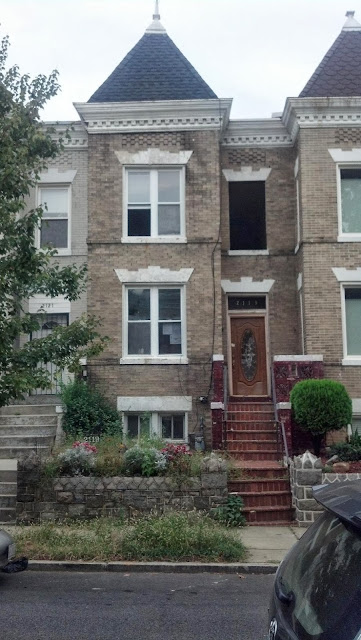 And here is what it looks like today.  The front is covered by a blue tarp, so you can't see too much.

But the entire front of the house has been removed. 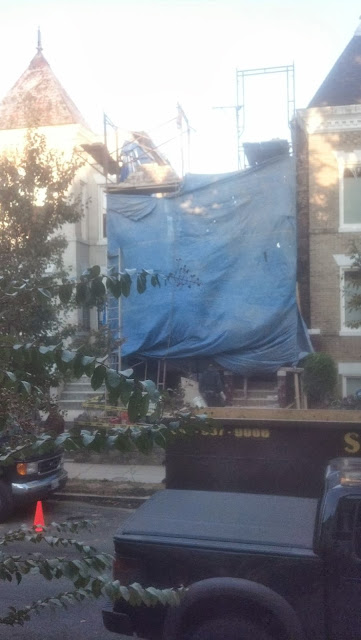 Once the blue tarp comes down, more photos will be provided.

A question for the community:  Has the front of any house in Bloomingdale ever been totally removed and replaced?  At first recollection, my answer is no, but maybe it's not the first.
Posted by Scott Roberts of Bloomingdale at 6:02 PM

There was a stop work order issued at some point - it is not dated on the PIVS. But it says -

Note to developers, don't be a jerk to the neighbors.

More reason why the neighborhood needs to seriously consider becoming a historic district. Bloomingdale has some of the best preserved, unaltered housing stock in the city. Pretty soon it will be chock full of pop-ups and tasteless renovations! Would be a shame if the neighborhood lost its charm and architectural history.

It's a full-on demolition, just done slowly to make it seem otherwise.

Scott,
The house on the NW corner of first and Thomas had its facade removed a handful of years ago.