I have only copied in the portions of this HPO message that relate to the McMillan Sand Filtration site.

Having trouble viewing this email? View it as a Web page.

This document and others related to the June 27 and July 11 meeting and public hearing are posted on the HPO website at:

or is accessible through the following abbreviated URL: http://tinyurl.com/kxkh5jf
___________

The Historic Preservation Review Board met and considered the following items on July 11, 2013.
Present: Gretchen Pfaehler, Chair; Rauzia Ally, Andrew Aurbach, Maria Casarella, Graham Davidson, Nancy Metzger, Robert Sonderman, and Charles Wilson. Absent: Joseph Taylor.
HISTORIC LANDMARK
McMillan Park Reservoir, 2501 First Street, NW, HPA 13-#318, concept/park and community center building, rowhouses, grocery and apartment building, office buildings (continuation of June 27th meeting)
The HPRB found the conceptual designs to lack overall cohesion and unity, and did not sufficient relate to or evoke the characteristics of the landmark. The Board voted (6-2) to approve the principles outlined in the master plan design guidelines, but that further work was needed for the projects to be consistent with those principles. The Board voted (8-0) that the concepts should be revised and return for further review when ready; below is a summary of the comments offered:

1) A consistent perimeter condition (including the topographical plinth and the Olmsted walk) should be retained. New construction should be pulled back accordingly.
2) The tripartite character of the site should be retained and reinforced. The entrances to the north and south maintenance corridors should be dominant while new openings, curb cuts and roads through the site should be minimized as much as possible. Particular attention was needed in the center section of the site, and suggestions were made for reorienting the buildings and eliminating or reorienting roads and views.
3) Buildings on the site should be developed to provide a unified and cohesive whole.
4) The community center was found to be generally compatible with the character of the site. As the design continues to be developed, meaningful incorporation of the retained underground cell into the center should be considered
5) The park was found to be generally compatible with the character of the site. The planting plan should be developed to frame and enhance rather than obscure views of the above-grade historic structures, and should retain the site’s broad sense of open space.
6) The townhouses were found to be in need of significant simplification and rethinking of the materials and colors, and should be organized to coalesce into larger block-fronts that relate to the larger civic scale of the site.
7) The mixed-use grocery store and apartment building was found to be conceptually strong and the strong expression of the base and the use of setbacks for the tower were appreciated. However, the sharp contrast of materials and geometries were generally thought too discordant and distracting from the character of the site.
8) The medical office buildings were found to be unconnected to the site, outward facing with too much sheer vertical height concentrated immediately on the north maintenance corridor. It was suggested that the mass be pushed to the north and the healing garden open space either be more oriented to or opened up to the interior of the site. If the north maintenance corridor wall is be removed, the base of this building (and others along the corridor) should more closely reference it; the building should also more fully engage the retained cell 14. 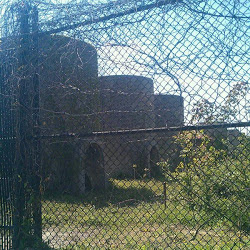 Posted by Scott Roberts of Bloomingdale at 10:34 PM