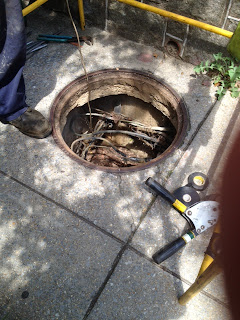 Pepco officials, about 15 of them!, attended the Bloomingdale Civic Association meeting last night [Monday, 07-15-2013] to address concerns about the recent power outages.  Below is the feeder line map for Bloomingdale.  As you can see, there are many different lines, and Bloomingdale is serviced by two substations - one near Harry Thomas Way in NE, and another in Shaw near 10th and O Streets NW.

The Pepco officials made many references to reliability improvements that they hope to have completed by the end of the year - some work will be done soon, some testing will be done when it is cooler.

They also have a maintenance program where they inspect lines every six years - I saw them on First Street NW last week. (A line at the deepest point was very corroded.)

They noted the work done last year on W and V Streets, and also at First and R, and said the work was successful in resolving issues.

There will be work on the Red line at some point to up the voltage, which will require a planned outage. Door hangers should be distributed three days in advance.

Hope we are nearing the end of our utility issues in this neighborhood.

I don't see the substations' symbol in the Legend?

The substation locations were mentioned in response to questions from neighbors and are not noted on the map.