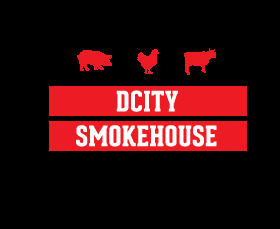 At DCity Smokehouse, the finest barbecue in town, from a chef’s hands

People stand on the southwest corner of North Capitol Street and Florida Avenue NW almost any time of day, waiting for a bus or just killing time outside Walter Johnson Liquors, a package store with a “no loitering” sign in the front window.
Odds are good someone here will hit you up for a handout as you wander over to DCity Smokehouse, a door down from the bustling intersection. You might think about making a donation and consider it the price you pay to gain access to the District’s best barbecue joint.
Words like “best” don’t roll off my tongue easily, particularly when it concerns barbecue, which ranks among the most difficult cuisines to master in the city. Many urban operations employ set-’em-and-forget-’em smokers, designed to minimize the vagaries of wood-burning pits by relying on backup heat sources, such as gas or electric, to maintain consistent cooking temperatures. Other joints take a conservative approach to restocking the smoker, preferring to hold previously smoked meats for hours, the briskets and ribs losing moisture and texture with each passing minute.

Posted by Scott Roberts of Bloomingdale at 4:13 PM